Rannoch Station: The Longest Cul de Sac in the UK?

There may be a few challengers to this accolade but, at around 34 miles up a dead-end road, a visit to Rannoch Station is worth every twist and turn of this Highland road.We started out from Aberfeldy and drove via Weem and Dull to the high peak of Schiehallion which towered above us. It brought back memories of an all day trek to the top, all 1083 metres of it, a few years ago but today we just admired it as we headed towards Loch Tummel (Schiehallion: How we bagged our first Munro).

The road hugged the edge of Loch Tummel then Loch Rannoch and through the little village of Kinloch Rannoch. If you enjoy driving as I do, it is one of those memorable drives but the temptation to take your eyes off the road for anything more than a few seconds should be avoided in case you meet a high speed postman, courier or water authority vehicle.

You may be wondering why a station would be built in such a remote location to serve only a few residents. The station is on the West Highland line which runs from Glasgow to Mallaig. Opened in 1894, in places because of the peat bogs had to be floated on a bed of roots, brushwood and tons of earth as it crosses the 50 square miles of Rannoch Moor. When you see the stunning rugged scenery it is a miracle they even attempted such an endeavour. Nowadays there are 4 trains a day northbound and the same number southbound, one of which is the Highland Caledonian Sleeper heading all the way down to London Euston. 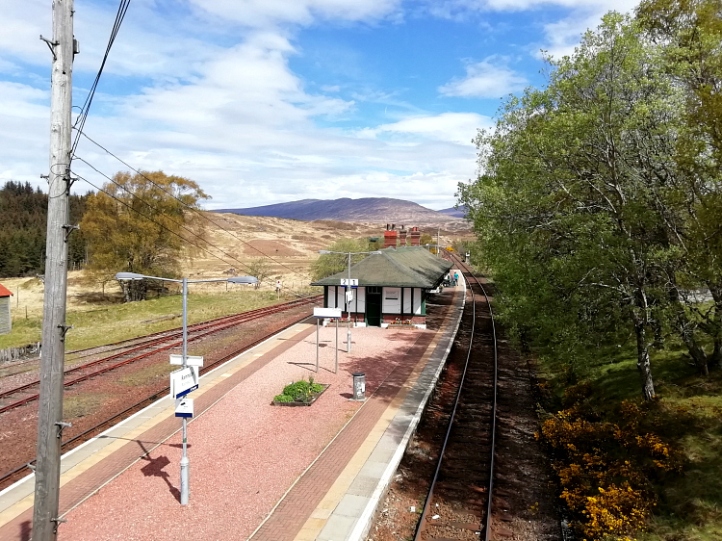 An Oasis on the Moor

Despite the drive taking well over an hour it felt like in no time at all we were arriving at a building and car park. The first building we saw was The Moor of Rannoch Hotel. Built back in the 1890s to house engineers building the railway, it is now a hotel and restaurant which is open to non-residents – a very welcome stopover for walkers on the moor or heading up the cul de sac. What is an even more welcoming sight is the picturesque Rannoch Station Tea Room and Shop (open March to October). The old station ticket office has been transformed into a cosy tea room full of gifts, timetables, maps and walking accessories but I couldn’t take my eyes off the counter of freshly baked cakes, scones and biscuits. Shame we are on a health kick! It took a lot of willpower to order just a coffee.

After our caffeine hit we took a walk along the platform to the signal box which is open to explore but obviously not operational (unless we actually divert the Highland Caledonia Sleeper). At the end of the platform we almost missed seeing a memorial to James Renton. He was the guy who ensured by using his own money that the line was completed when it looked doomed to financial failure. 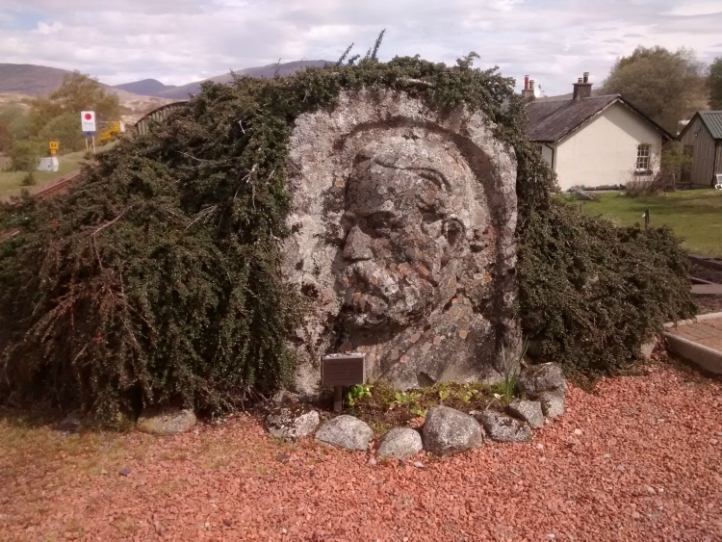 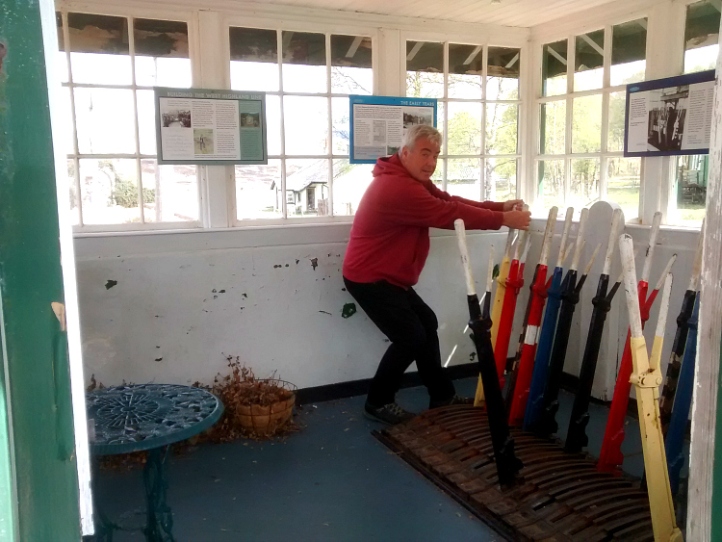 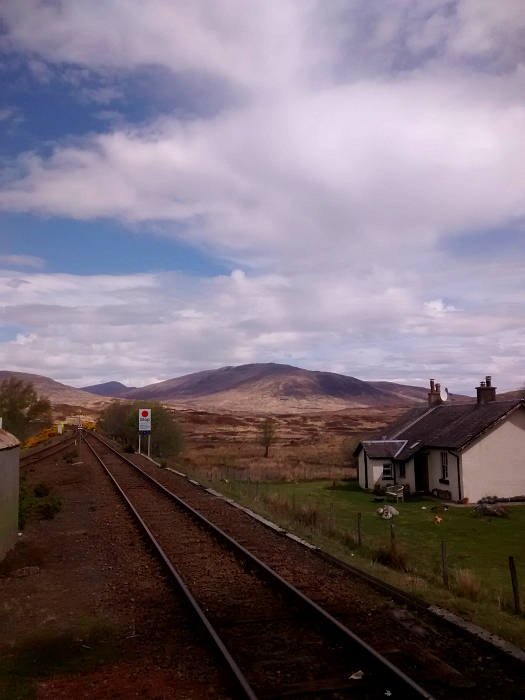 We knew there was a nearly loch that we could walk to, Loch Laidon. To join the track we had to cross over the tracks and it was at this point, when looking down the line for any stray trains, that we realised how desolate the place could feel in bad weather or the midst of winter. Safely over the lines we continued up a small track to pass two small cottages and walk along the edge of a pine forest until the track met a shingle beach on the loch which had amazing views of Glen Coe, Ben Nevis, Schiehallion and the Glen Lyon hills. A perfect place for a lunch snack. There were no other signs of life for miles. 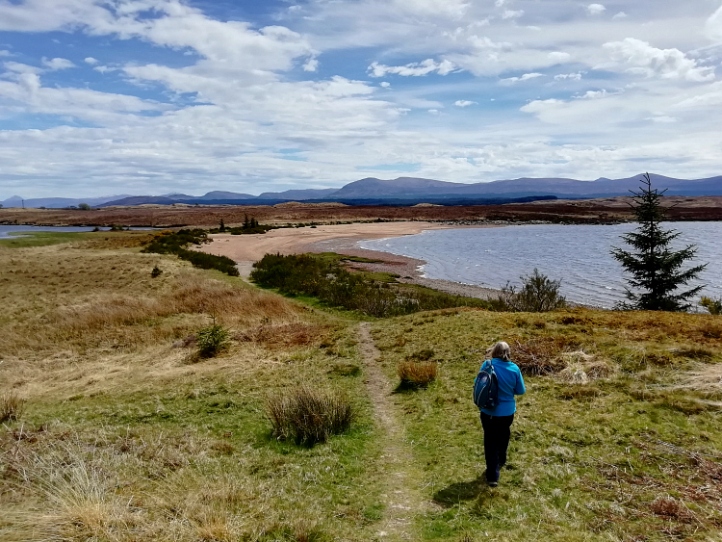 It was after 10 minutes that a couple walked along the track towards us armed with large cameras round their necks. Now call me unsocial, bad tempered or just a bad person but from about 5 miles of loch beach they had to sit 2 rocks down from us chattering, snapping, etc. Solitude totally spoilt and it was us that decided to move on. This time it was to a gorgeous fine golden sand beach. Even better we thought.

We took our own photos on mere mobile phones and sat to enjoy the views with the loch waters lapping at our feet. This time we managed about 20 minutes before Mr and Mrs Camera club arrived. We knew when we were beaten and maybe it was our problem for selfishly wanting all this beauty to ourselves. 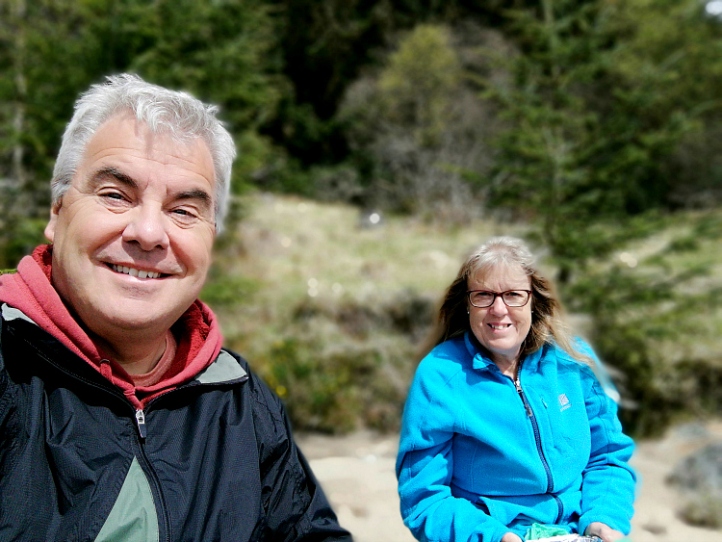 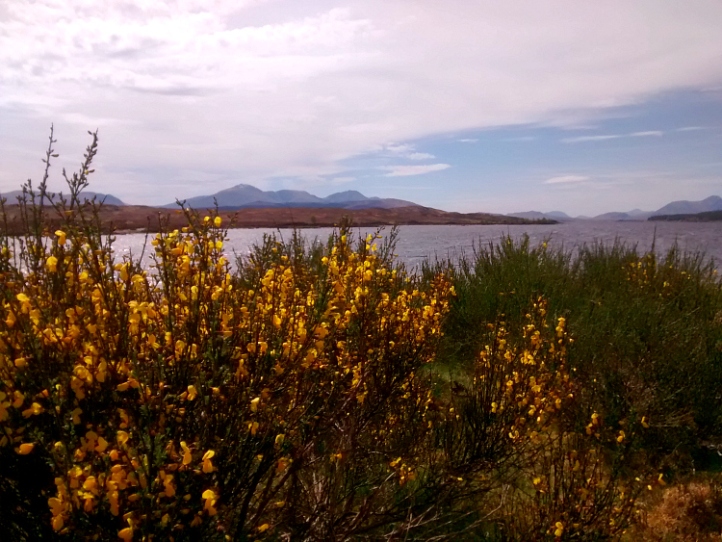 We took a slow stroll back to the car but not before getting the times of the trains. The next station north of Rannoch is Corrour, only about a 7 minute journey. This is the highest station in the UK and 10 miles from the nearest road. Tina, our HelpX host, had suggested an outing one day it involved driving to Rannoch Station, taking the train to Corrour and walking the 7 miles back to Rannoch. We would need a clear day to get the best experience and strictly stick to the path. Many a walker had seen Rannoch Station in the distance and decided to take a short cut across the moor only to find themselves up to their knees and beyond in the bog. I had a feeling that even there I would see the yellow cagoules that are Mr and Mrs Camera! But that walk was for another day. 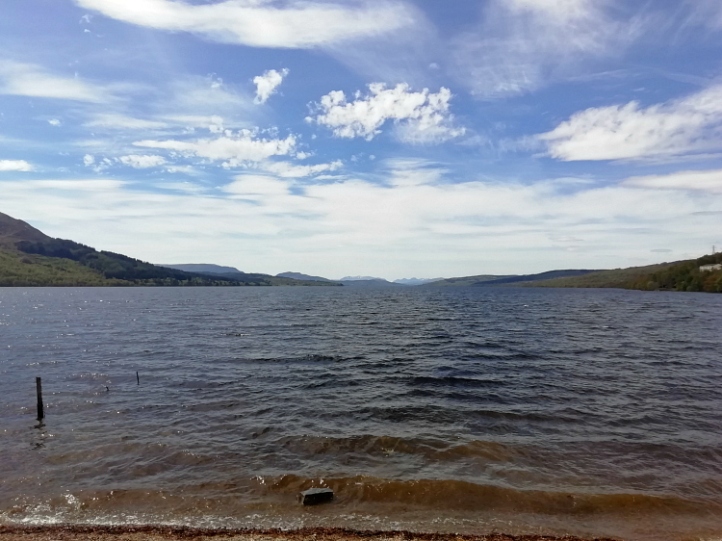 We made the reverse journey down the cul de sac and enjoyed different views as we returned. A great day and a unique place. For Disney lovers I must add that thankfully there were no plaques to notify visitors that Scrooge McDuck lived on the moor in a place called Dismal Downs. This may be the one and only time I was happy not to see an information plaque. 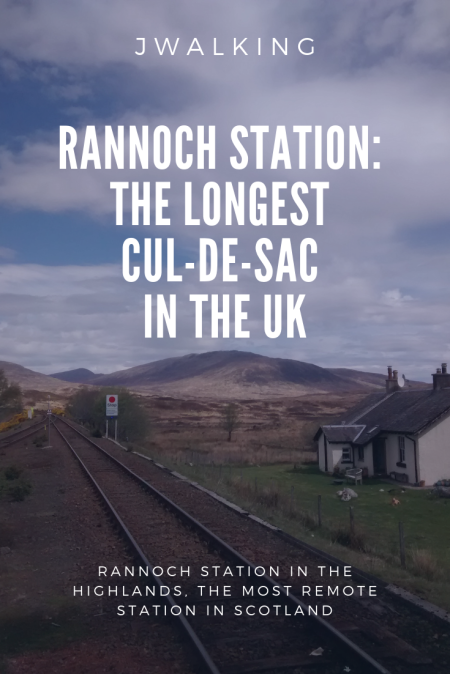 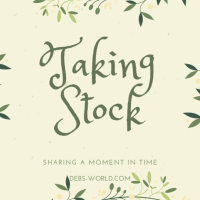