We have been know to keep on and on like a broken record about how great Airbnb is. When we say this we mean it more as a way of meeting people than having a place to stay. No better proof of this than our stay in Taupo. Taupo is fairly central on North Island in what is know as as the Taupo Volcanic Zone. This area has been venting, shifting and generating geysers and hot springs for a mere 2 million years and is still classed as a highly active area. The Lake itself, with a shore length of 120 miles and a depth of over 600ft, is actually a flooded volcano crater. Oops I digress, back to meeting people.

Back in January 2016 on our first trip to New Zealand we arrived by bus into Taupo. There to meet us was Leonie in her trusty Suzuki Swift to take us back to her home. After a great stay of around a week we knew we would remain friends. We exchanged email addresses and kept in touch during our housesitting and HelpX experiences but as soon as we knew we were coming back we contacted Leonie and her husband Martin to see if we could meet up. The offer to stay with them bounced straight back and it was January 2016 all over again with Leonie waiting for us in her little Suzuki Swift as we arrived at the bus stop on the edge of the Lake.

Leonie works part-time and had kindly offered to take us on a tour round some of the lakeside areas and properties. We headed out on the north side of the shore from Taupo to Acacia Bay which was full of a mix of older and more modern properties. For those who don’t know, it is more common in Australia and New Zealand for plots of land (termed sections) to be sold and then the buyer gets an architect to design the house that fits their requirements. Some people even buy a section if it is in the location they want with an existing house on it then demolish it.  Alternatively, if it is large enough, they can split the section in two and build two houses. These houses are mostly wooden framed and cladded. Brick houses are less common. This all ends up with streets full of houses of very different designs and ages. For me, there is too much choice but it is nice to be nosy and compare just for the fun of it.

A short drive along the lake we parked up and took a walk down through the trees to Whakamoenga Point. It was a picture perfect day and we sat for a long while watching the kayakers, sail boats and swimmers. Another short drive brought us to Upper Acacia Bay (also know as Blue Ridge) where the properties were way bigger and way more exclusive with panoramic views across the lake.

All this real estate gazing builds up a thirst so we headed for L’Arte. This was an art cafe set it gardens that had features resembling Gaudi’s work. The food was so tempting that coffee turned into a light lunch which was prepared on site using all fresh New Zealand produce. If you are in Taupo it is definitely worth the short drive.

Our final stop on this Tikki Tour was to Kinloch. This area was originally a sheep station but is now a growing community of residents and holiday homes. On the way into the town there is the Kinloch Golf Club which was designed by Jack Nicklaus. I am not sure if he had anything to do with the design of the actual club house as well as the green but it was a bit of an eye sore in the beautiful landscape. There are a lot of new sections for sale in Kinloch and I hope that it doesn’t change the “little haven” feel of the place. The temperature had been building up with each stop so it was time to have a refreshing paddle. The lake shore was just the place and the water was warmer than we thought it would be. We remarked how there was a brown deposit on the edge of the water. It looked a little bit like fine leaf mulch and we didn’t think much about it and just enjoyed the walk and felt a bit sad that we didn’t bring our swimming things.

To remedy that, when we got back to Taupo we headed for the lake front and had a nice long swim. There were lots of others doing the same thing to cool off. On the walk back we looked over the setting up of the course for the Ironman event that was taking place the following weekend. This was to be a half Ironman which starts with a 2 km swim, followed by a 90 km cycle and a 21 km run. The buoys had been set up in the lake, the bike racks were ready in the park and the barriers were arriving to cordon off the road for the run. We decided to return to see it all happening and cheer them on. 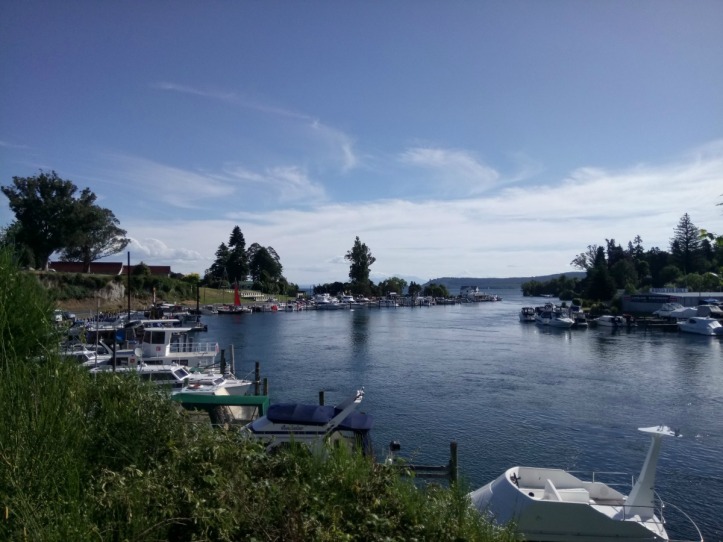 It wasn’t until we got back and saw the evening news that it might not be that easy. The main headlines on the news was that, due to the very warm water temperatures, an algae had been found in the lake and a public health warning had been issued. The toxic algae can cause breathing difficulties, skin irritation and neurological problems. All swimming in the lake was now banned. Oops too late for us. It must have been that brown deposit we saw at Kinloch. We all felt OK and had no skin irritation although Jon couldn’t resist saying that I had neurological problems anyway so it would be difficult to say if there was any change!

This resulted in the swimming leg of the Ironman being cancelled and replaced with a 3 km. What a blow for all those Ironman contenders who had trained for the swim and was maybe their strongest event.

I have mentioned baches before in previous posts. They are little modest holiday homes or beach houses and an iconic part of New Zealand‘s culture. An early bach would not have had running water or electricity and would have been made out of cheap or recycled materials. They have been somewhat ungraded now but you still do see authentic baches nestled between other larger holidays homes.

Leonie and Martin had offered to drive round the south of the lake to Kuratau to meet their friends Christine and Steve and see their bach. Yes please! An hour’s scenic drive along the coast brought us to the small settlement of Kuratau. From what we could see, local facilities was a shortlist: a petrol station, a winery and a recycling centre. Christine and Steve have a house in Taupo but this little section originally just had a little caravan on it but they have now built a bach which comprises of a kitchen, bedroom, shower and toilet area and covered deck. It is all you need! Lunch on the deck (courtesy of Master Chef Leonie) and then a walk around the area was idyllic. We were joined later by their friends, Erin and Daryl, who own a nearby section and the afternoon flew by chatting over a chilled beer. When working life is so busy, being able to retreat somewhere like this must be fantastic. The only downside is rejoining the real world! 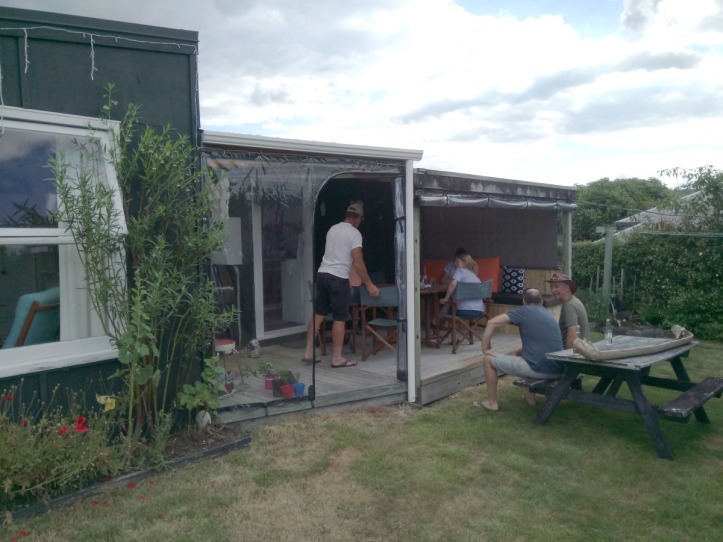 JWalking from the Bush to the Moon

Looking back I am not sure how we fitted this all in but we certainly didn’t feel like we were on the go the whole time. The next adventure was a bush walk at Opepe Reserve, wandering through the trees. There is also a very small cemetery containing five graves. Two of these are war graves and contain the bodies of nine members of the Bay of Plenty Cavalry who were killed in a surprise attach by the Te Kooti tribe in 1869. The other graves are of settlers who died. 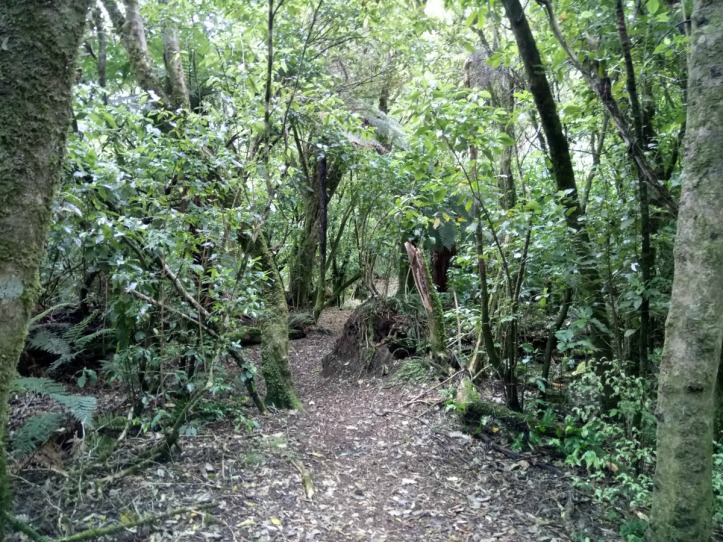 We also managed to fit in a trip to the Aratiatia Dam a few kilometers outside Taupo. The dam feeds the hydroelectric power station and gates are opened 3 or 4 times a day from the Waikato River. When his happens the gorge below is flooded and the landscape reverts to the rapids that were there prior to the dam’s existence. We had timed our visit just before the spill and it is quite spectacular. The calm river changes into a churning cauldron.

On our way to the dam we passed Craters of the Moon and Leonie kindly dropped us there so we could take a moonscape walk. The area has a lot of hydrothermal activity resulting in lots of steam vents and craters. There is a board walk and paths to take you safely around. These have to be moved at regular intervals depending on the location of the newest activity. It is quite an eerie place and I didn’t like hearing the water at boiling point bubbling just in front of the boardwalk. Nature is a powerful thing and this place brings home the force that lays beneath our feet. It was a hot and little smelly 45 minute walk around the whole field. The little kiosk at the end with ice creams and drinks was a welcome sight. 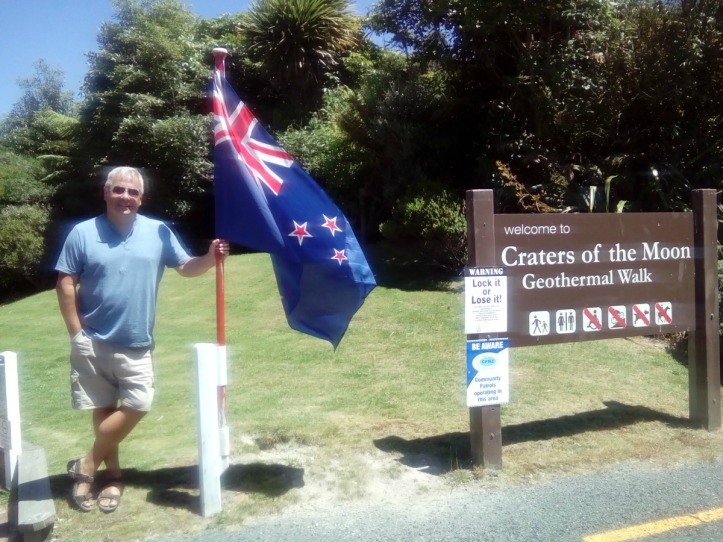 Apart from all these new adventures, we did manage to repeat a couple of things we had enjoyed on our first visit. The Huka Falls walk and ending up watching the brave bungee jumpers throw themselves off the edge of a platform 47 metres above the river. Unlike some bungees, at this one you can be dunked in as much as you want. One guy virtually disappeared at least twice on his jump. I have always had a bit of a fear of heights which has stopped me in the past but now I have overcome that a little, however rightly or wrongly, I have more of a fear now for my joints not being quite so supple. Add in the potential neurological damage that the g-force will have on my already toxin damaged brain, I am going to decline this time.

Our stay with Leonie and Martin and their friendship was what made the return to the relaxed vibe of Taupo such a great experience. They are such good easy-going company. Leonie loves her kitchen and is such a great cook. I copied a few of her tasty recipes down for whenever we have a kitchen again! She had Jon eating salad. Interestingly, when we left Leonie was quick to change our “Goodbye” to an “Until next time”. 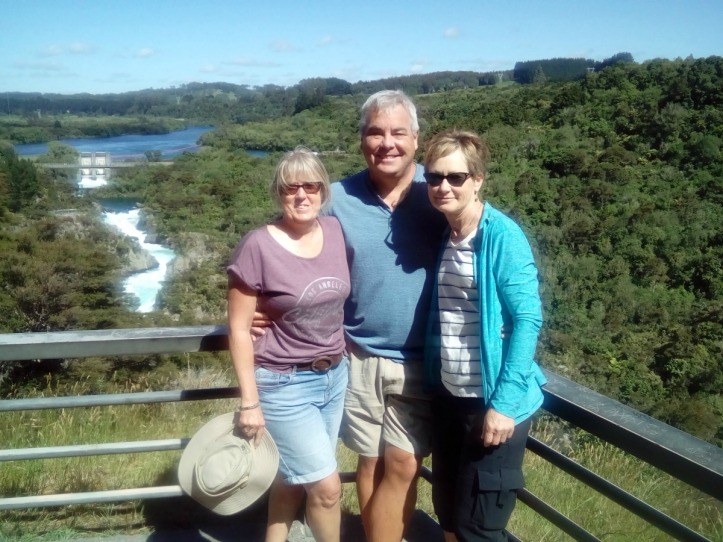