The Commonwealth War Graves Commission manages hundreds of war cemeteries all over the world and each one is looked after with so much care and respect. The cemetery at Groesbeek is no different. It sits at the top of a hill north of Groesbeek away from the town and other villages. The atmosphere is touchingly quiet and  reverential as you would expect.

Although the cemetery is primarily for Canadian servicemen that fell in this area during the second world war, there are a lot of British soldiers and airman also resting here. The first thing that strikes you as you enter is the amount of small Canadian flags that have been placed by virtually every grave. This obviously means that a lot of people have visited the cemetery to show their respect and also to leave something to show that respect. There are also a lot of poems, letters and photos placed by individual graves that tell even more of a story.

Apparently local Dutch schoolchildren are often given a grave each to look after and research. This is great for teaching them about the history of  their area and getting them interested in what happened during World War Two but it seems to be even more important than that to me. It somehow keeps alive the memory of individual soldiers. This adoption happens all over the Netherlands. 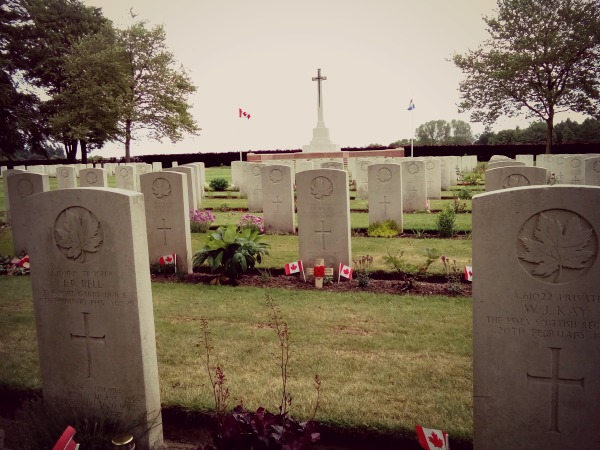 Some interesting facts about Groesbeek Canadian cemetery. 2617 fallen are commemorated here, of those 2338 are Canadian. There are 268 from Great Britain and others from Belgium, Australia, Poland and the Netherlands. The reason that so many Canadians are here is that their commanding officer, General Crerar, decided that no Canadian servicemen should be buried in Germany, so they were re-interred here.

Two service men who were awarded the Victoria Cross are buried here. Sergeant Aubrey Cosens of the Queens Own Rifles of Canada and Lance-Sergeant John Baskeyfield of the South Staffordshire regiment.

Of course every single serviceman that laid down his life is as important as every other and neither rank, age, nor the awarding of medals should make any more poignant than any others. A few have their own unique stories though.