Some of you may already know that the jwalking mantra is that we have an overview of where we are heading but don’t do much detailed research before arriving.  This helps us totally immerse ourselves in the previous location(s) and adds the wow factor when we arrive and start exploring. I think the only exception has been a booking to another island, Alcatraz.  We had been told that booking ahead was essential – and it was.

All this preamble is really just to say that I had no idea that Montréal was a river island.  In fact it is the second most populated river island in the world. This is where I can hear you all shouting, “We knew that”.  Well we didn’t. Not even Mr Geography/General Knowledge himself, Jon.

We travelled from Québec City by train. We like to mix up our modes of transport and the three hour journey was probably on the most comfortable train we have ever been on. Clean reclining seats, personal air vents, lights, power points and rubbish bags. Add in the cheerful conductors and snack and drinks trolley and it was the nearest we would ever get to premium economy or some sort of “class”. Our bags were whisked away on arrival at the station and arrived at the baggage carousel at Montréal.  We love a baggage carriage and Via Rail Canada rule! 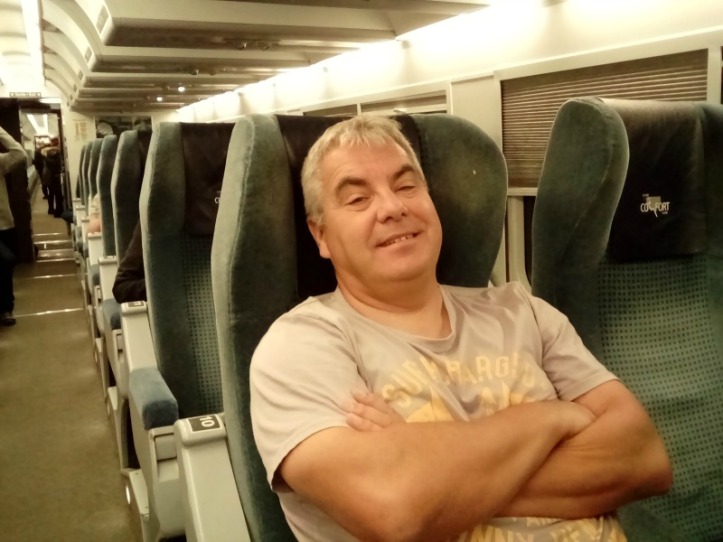 After the, Abandoned in Québec scenario, some travellers would worry about the next booking.  Strangely we never do. We move on with the blind optimism that is us. After a short walk and 20 minute metro ride to the north of the island we arrived at our first floor self contained apartment courtesy of Fares, our host. Fares is one of those hosts who has thought of everything you could possibly need during a stay and laid it on. As I type this post I am sitting in the office area which is complete with desk lamp, monitor, keyboard and all the stationery items you would need in an office. The kitchen has every gadget you can think of. Refreshing because we have stayed in places where there is an oven but nothing to cook anything in or on.

We are a few blocks from the Jean Talon Market which at this time of year seemed to have pumpkins-a-plenty in all shapes, sizes and colours.

The apartment also has the traditional external staircases, as do most of the apartments in this suburb. The reasons for these staircases range from space saving to cost saving. The landlords saved the cost of heating internal staircases and corridors. For whatever reason, we like the feature

Armed with plenty of maps, we jumped on the Metro to have our first look around the city. The Metro is cheap C$3.25 (about £2.20) and you can transfer to any line within a 90 minute period. Weirdly because the system is totally underground all the trains run on rubber tyres. Makes the journey a bit bouncy, some would say sea sick.

It was a bit of a grey day and the numerous decks with summer outdoor seating were being packed up for winter so the photos probably don’t show the city in it’s best light. We walked around the old port area, City Hall, Place Jacques-Cartier and Rue Saint-Paul.  All these were places where the locals and tourists hang out in the better weather but the transition had taken place to everyone huddled in cosy little cafes and restaurants.

We ended up in the Place d’Armes and paid the C$5.00 each to do a self guided tour of the Basilica of Nôtre-Dame of Montréal.  It had an impressive painted interior which was floodlit. We did wonder how anyone would have seen it by candlelight. 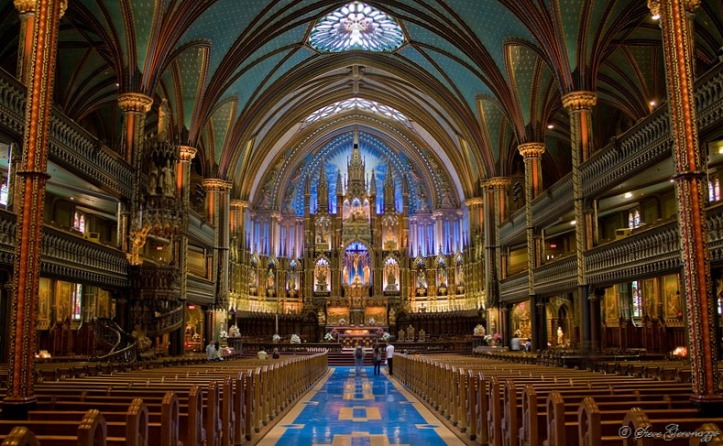 There is the same distinct French atmosphere, language and culture here but, at first glance, Québec certainly wins for presentation.  Perhaps it is because it is the provincial capital.

Islands of Sainte-Hélène and Nôtre-Dame

These two little river islands can be seen just across the river from the city.  The one nearest to Montréal, Sainte-Hélène, is really split in half. One half has a large park and Biosphere, an environmental museum/centre and the other half is La Ronde, a huge Six Flags funfair. The season ended the day before with a Halloween themed event. 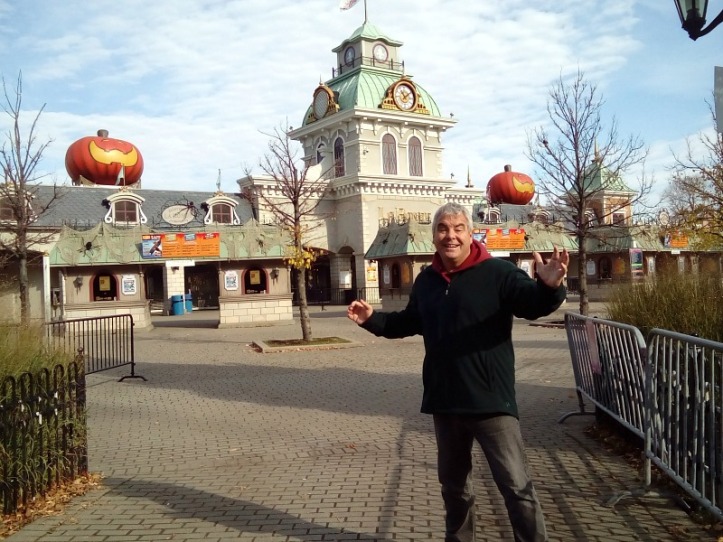 The second island, Nôtre-Dame, is dominated by the Gilles Villeneuve F1 race circuit. The circuit runs the permimeter of the whole island and basically looked derelict. You can walk, cycle, skate and even drive around the circuit but apart from a few signs keeping the pedestrians away from the cars, there were no advertisement hoardings.  It just looked like concrete walls and metal railings. We thought it was derelict. It was not until we got back to our apartment that we realised it actually still holds a world championship round in June each year. The hairpin bend and stack of tyres looked bland but interesting so we took a photo, only to read later that this is known as the Wall of Champions. The likes of Damon Hill, Michael Schumacher, Jacques Villeneuve, Jenson Button and even Sebastian Vettel have fallen victim to this tricky turn.

The island is also home to the Olympic Rowing Basin, also looking derelict, and a huge casino. Somewhere to let your hair down if you circum to the Wall of Champions or your boat sinks!

For our generation, I think the name of Montréal will always be linked to the summer Olympics in 1976. So with excitement we walked along tree lined avenues the 5 miles to the Botanical Gardens adjacent to the stadium. A quick look at the creatively decorated pumpkins and a coffee to give us a boost we crossed over into the Olympic Park. 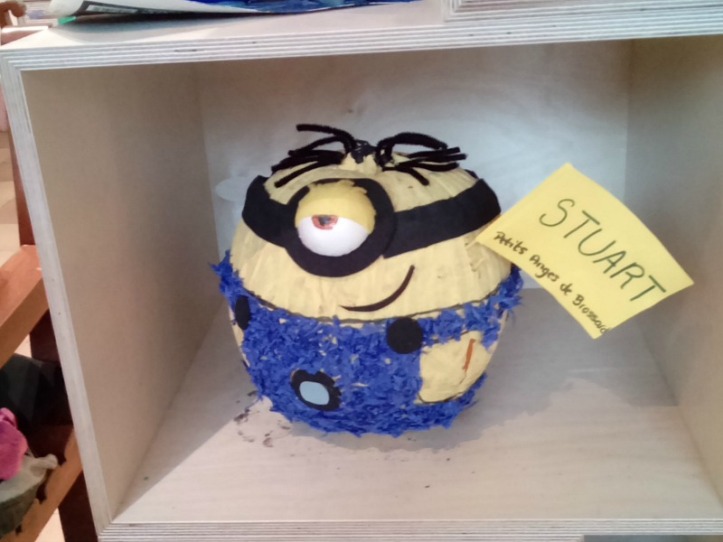 Unfortunately, this is where it all went down hill. The stadium’s iconic design could not detract from the appalling state it was in. Like our visit to the city centre and the islands, not a plaque or photograph to be seen to big-up its place in history.  Once again, we needed to get the facts when we got back to the apartment. The remnants of our bubble that had burst at the park was now being shredded beyond belief.  The whole games was a complete disaster in so many ways.  Too many, even for me, to list so if you want to know some more about it check out Wikipedia or  The Montreal Gazette.

I have pinched a photo of what the stadium apparently looks like in the summer followed by the what it’s actually like right now. 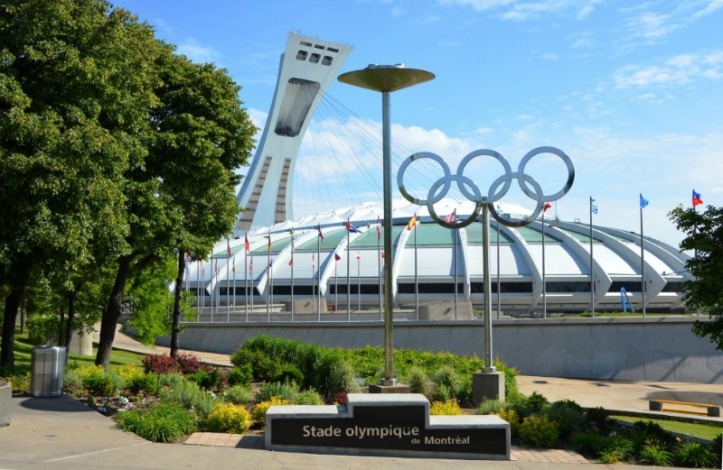 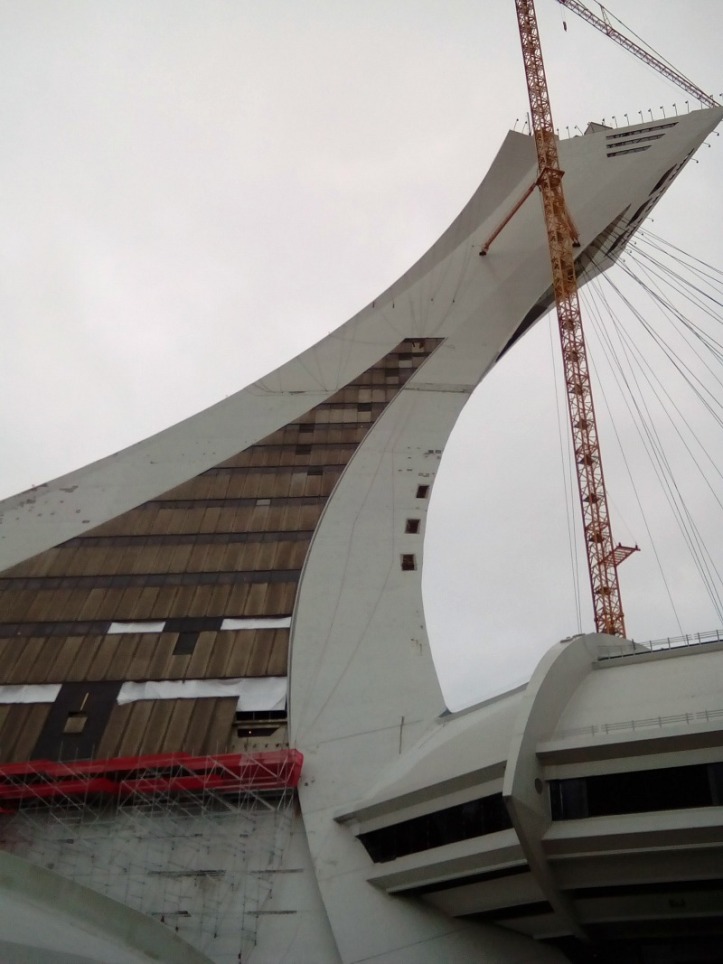 I should add that there is a Biodome (zoo), planetarium, large football stadium and cinema complex in the area so there is much more than just the stadium and observatory. Maybe the emphasis has been on them and not the actual focal point. I know there are debates about the cost of the conversion of the Olympic stadium in London but you only have to seen this one to be convinced that no one wants to end up with a not so white elephant.

We decided to get the Metro home and save the legs for the Montréal outing.  Just need to make a coffee and head for our little balcony to write up the diary. Bit old-school I know but you can’t teach this monkey new tricks. 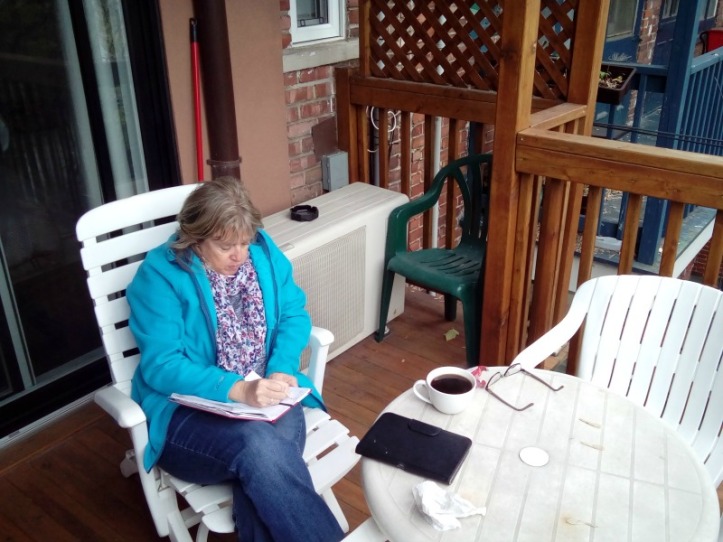