Several months ago we hatched a plan to explore a part of England that we had never been to but only heard good things about. We would only have enough time to get a taster, the plan being that we would return and explore at greater length if we liked what we saw, The place is Northumberland and specifically for this post Berwick-upon-Tweed to Whitley Bay. Except we were doing it south (Whitley Bay) to north (Berwick-upon-Tweed).

We hopped off the train from Edinburgh in Newcastle and after a quick transfer by Metro to the airport picked up our little hire car. A 20 minute drive brought us to Whitley Bay. It was bathed in sunshine and quite busy because it was a Sunday and easily accessible from Newcastle by the Metro.  Literally everyone had an ice cream. 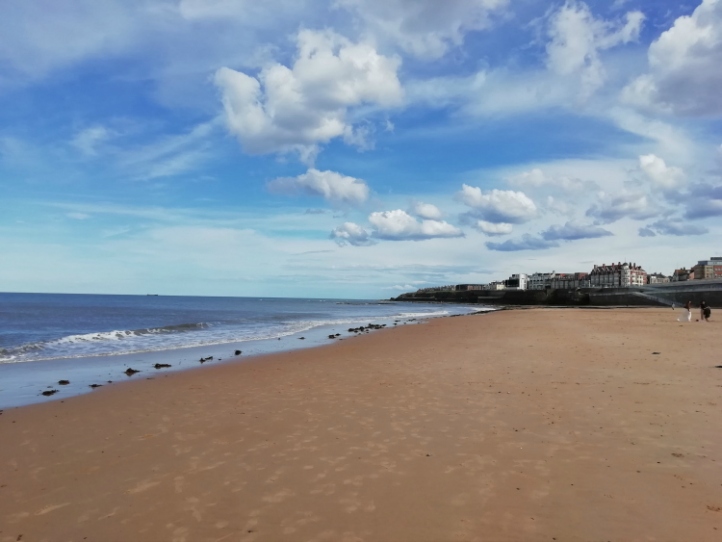 We had a long walk along the promenade and admired the large domed building which we found out was called The Spanish City. It opened in 1910 as a concert hall, restaurant and tea room with a ballroom added in 1920 and after a recent major refurb finished in 2018 has a high class bistro, ice cream shop and a few other outlets. You may remember that the Spanish city was immortalised in the Dire Straits hit “Tunnel of Love” which, prior to it’s closure in the early 2000s, was played every morning in the Spanish City. 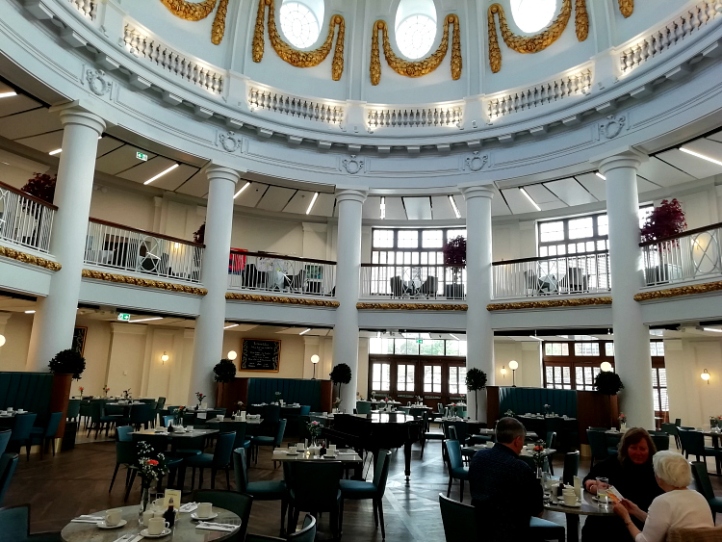 After all that sea air we were well ready to find our B&B and relax. It was only a stone’s throw from the front in a traditional seaside guest house. Love it.

Having done our homework, our planned route would take us over 80 miles but with lots of stop-offs planned it wasn’t going to be all driving. This is a brief run down and photos of the things we saw along the way. We headed north out of Whitley Bay passing St Mary’s Island and the St Mary’s Island Lighthouse standing out against the perfect blue skies. 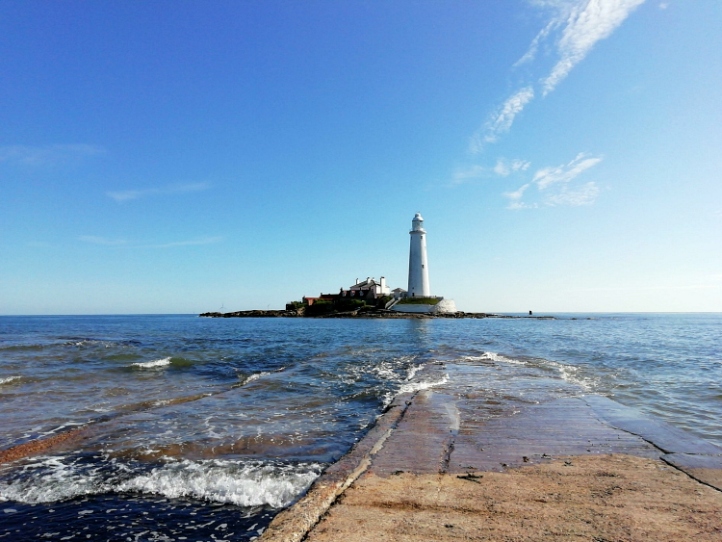 We tried to hug the coast as much as possible and our first stop was Newbiggin-by-the-Sea. It was a small harbour but once it the third largest shipper of corn only London and Hull being higher.  It had a very picturesque church on the headland and across the bay we could see a bronze sculpture standing on a platform in the sea. We discovered that this was “The Couple” an art work that was installed in 2017 as part of a rejuvenation project. It is one of those marmite things and opinions seem divided. What was probably more popular in the town was the 500,000 tonnes of sand that were brought up from Skegness to counter sea erosion in the bay. 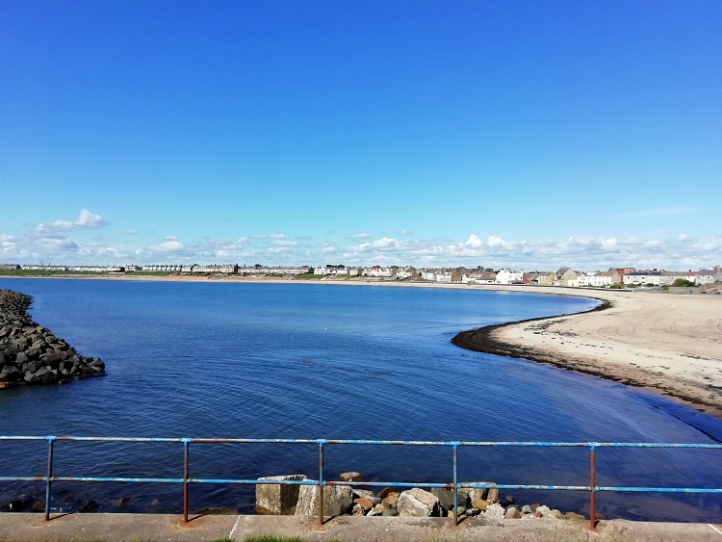 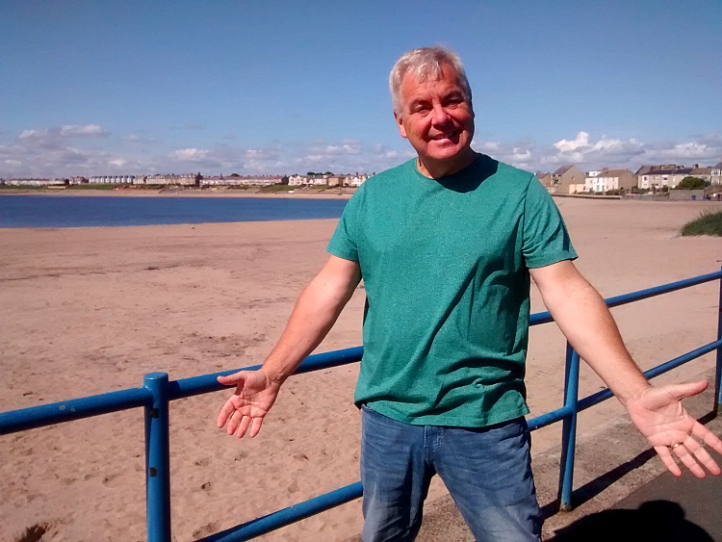 A few miles on and we came to the pretty seaside town of Amble. A boardwalk took us round the harbour to look back on the maze of coloured cottages and chalk boards offering cruises out to see the puffins. Just over a kilometre off the shore we could see Coquet Island. It has a lighthouse built on the ruins of a monastery. It is now mostly occupied by birds but there are seasonal wardens who take up residence during the summer to protect the nesting birds.

A brief visit to Warkworth Castle to admire its grandeur and take a few photos. It was impressive although a ruin but I’m afraid to say it was only a baby castle compared to what we would see later in the day.

Another few miles on we came to the beautiful coastal village of Alnmouth. As we approached it looked so isolated but quaint. On the beach there were still signs of some of the WWII tank defences that were in place along the coast. We had a good walk around and spent some time reading about an old local sea dog who manned the row boat ferry across the mouth of the Aln. I really love these personal interest stories and I could just imagine the old guy, out in all weathers to get people and goods across the tricky tidal river. 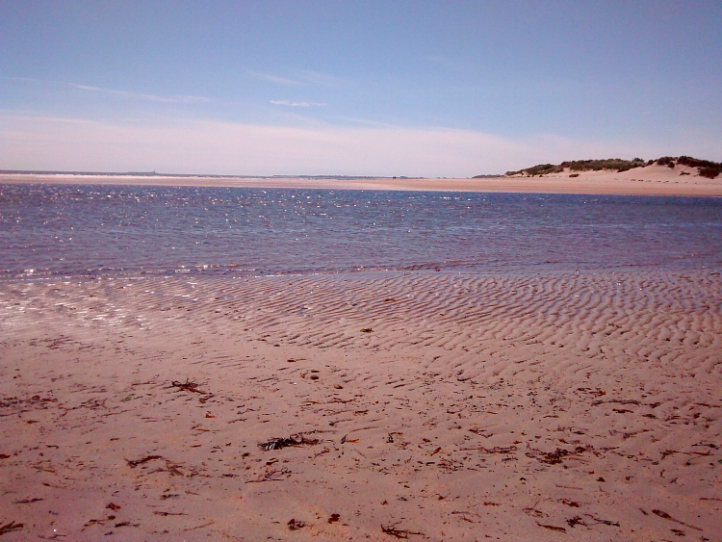 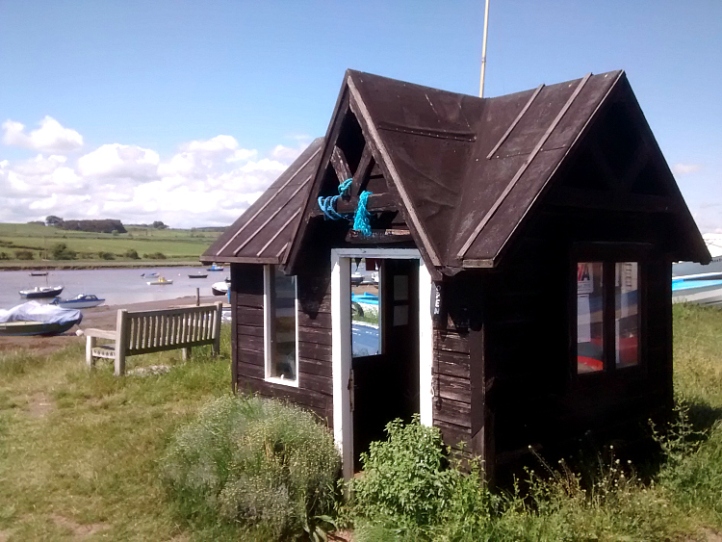 The Castles of Alnwick, Dunstanburgh and Bamburgh

We made a little diversion from the coast to get a sighting of Alnwick Castle. The castle was used as Hogwarts in the Harry Potter films. We could only get a view from a fair way away but it was very imposing and grand but would still be beaten in the “castle of the day” stakes.

Back towards the coast and further North we headed for Craster which has a mile walk along the coast to the spectacular brooding Dunstanburgh Castle. Now a ruin but still impressive against the backdrop of the sea and has a more isolated feel due to the approach being only on foot.

But the prize for best castle of the day goes to Bamburgh Castle. Privately owned it looms over both the beach and quaint village and green that is Bamburgh. I could rattle on and on about it’s history but the most memorable fact is that it was the first English castle to fall during the War of the Roses. How anyone successfully attacked this monster of a castle is beyond me.

Bamburgh also has one of those personal but more well known stories. It was the home of Grace Darling, the lighthouse keeper’s daughter who helped rescue survivors from a paddlesteamer in the 1830s which had run aground in an horrendous storm. Her heroism and sheer strength amazed me when I read more details of the rescue. Sadly she died of tuberculosis just a few years later, she was only 26 and has a ornate grave in the local churchyard. Interestingly, Queen Victoria contributed to the fund for her burial. 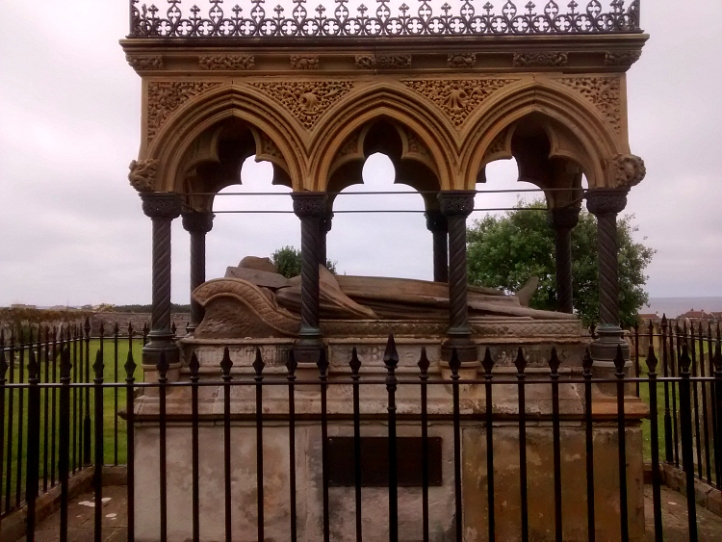 We had one last exciting adventure on the coastal adventure. Having checked the tide times we knew we had enough time to make the 17 mile journey across a tidal causeway to Lindisfarne (and back!). Sadly we would not have long to explore but that would give us a reason to return one day (always my cunning plan). As we approached the causeway there were more and more signs to make sure that we had checked the tide.

Then we were at the point of no return when we passed the watchtower which I think is what you use if you do judge it wrong and have to abandon your car and climb up high to get out of the water. I bet many a driver has chanced it and ended up abandoning their car. Before the road the only access was the Pilgrim’s Way, and access on foot was by following a set of poles. Lindisfarne Castle and Priory are impressive sights and there is so much to explore that a return visit is a must but for today the excitement of driving the causeway and actually timing it right gave us a good feeling.

Our final stop on our route was Berwick-upon-Tweed, the most northern town in England. We have passed over The Royal Border Bridge on the west coast mainline many times on the train and admired the River Tweed below us and the Elizabethan city walls surround a town with a turbulent history. The town has passed between English and Scottish rule at least 13 times and the border currently runs about 2.5 miles north of the town.

Jonno has many times told unsuspecting listeners about the dubious historical fact that the town of Berwick was at war with Russia when the rest of the country was not. This all stems from the time when England declared war on Russia in 1854. Queen Victoria signed the declaration in her full title, Victoria, Queen of Great Britain, Ireland, Berwick-upon-Tweed and the British Dominions beyond the sea. When peace was declared Berwick-upon-Tweed was omitted from the peace treaty, theoretically leaving it at war with Russia.

We saw no signs of military activity and enjoyed a 2 mile walk around the city walls which gave us great views of the river, the sea and the town below. There were lots of information plaques and frequent references to Lowry (of matchstick men style paintings) who holidayed here most years up until his death in 1976. 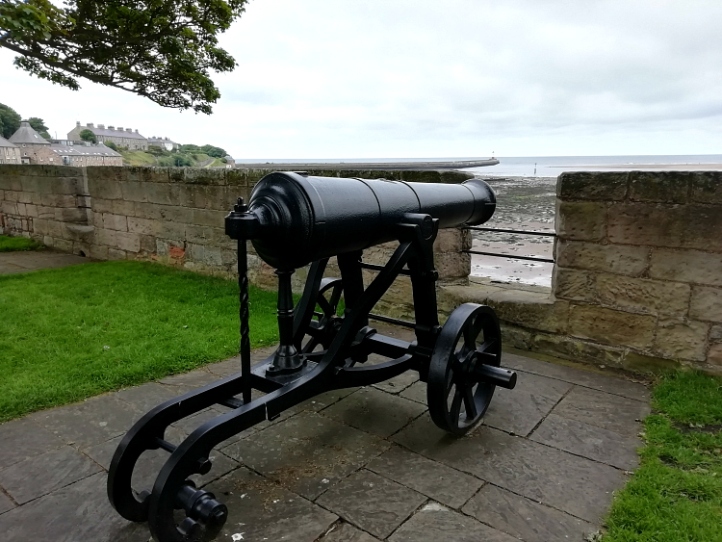 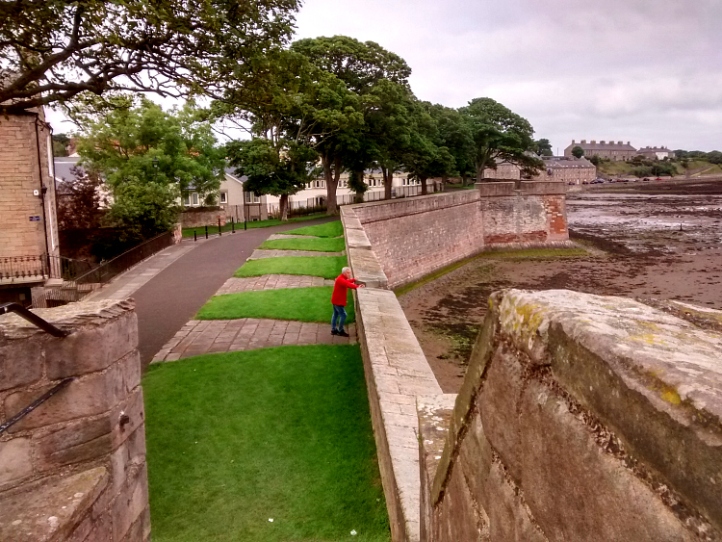 After this long day it was time to head to our B&B. It was called The Old School House and it was in a place called Mordington just outside Berwick-upon-Tweed.  The first day of our north east adventure had been so memorable and there were still 4 days to go but the next stop off for me was bed! 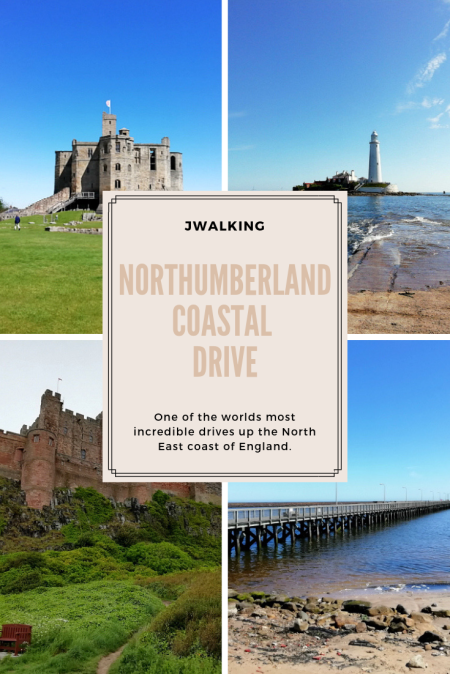