Back in the day, and I really hate that expression, a ‘stag do‘ was a few beers down the local pub with your mates the night before the wedding. That’s not how it works now. Oh no. These days a ‘stag do‘ has become a ‘stag weekend‘ and involves several days away and is never ever the night before.

Out eldest son Shaun is tying the knot in July so his ‘stag weekend‘ was arranged for the first weekend in June. Time to recover maybe? That sounded ominous. Secretive messages and emails confirmed the time and the place and a select band of untrustworthy reprobates were selected for the ‘stag team‘. Organised by his younger brothers Sam and Ryan, the final destination was to be Munich. One of our families favourite cities in the world so perfect for Shauns big send-off before he was legally signed over to Katie.

The ‘stag plan‘ was to meet up in Shauns local in Hitchin before getting a minibus to Luton Airport for the Munich flight. Everyone had been instructed to wear football shirts so as we left I was surprisingly presented with a Woking FC shirt to wear. Looked great obviously and I’m now their Number One fan (maybe). Within a few hours we were touching down in Bavaria ready to sink a few steins.

Before going on I should introduce the crack team of ‘stag idiots‘ that had been brought together for this overseas operation.

Now I’m not going to give you a beer by beer account of the whole weekend but will just mention a few special moments.

Two quick steins of the best beer in the world, Augustiner, in a the fabulous Augustiner Brau beer hall as soon as we got to Munich. The flight was late, the train was later, so we were worried that we’d find anywhere. Sam came up trumps marching us to the beer hall and we started the weekend in great style.

Ryan intimidating a whole table of French guys in the Hofbrauhaus courtyard on Saturday by just standing at the end of their table and staring until they got up and allowed us to sit in a nice shady spot. Great customer service Ryan. Thanks Frenchies.

Walking through the English Garden playing frisbee and vortex when suddenly Shaun noticed a completely naked German fella lying right in front of him! Apart from all being a little scared we gave him space before realising that we were in the middle of a whole field of naked fellas. All around us. Time to leave.

The whole ‘stag team‘ moving tables in the English Beer Garden when Shaun visited the toilet and watching as he was completely freaked out on his return at the empty table. As he turned and ran off to find Chris we all moved back, food and beers and all, so it appeared no-one had moved. He thought he was losing his mind. Brilliant.

A succession of dodgy ‘stag cocktails‘ for Shaun in our late night sports bar, organised by the dream team duo Chris and Beasley. Apart from whisky, gin, ouzo, red wine, vodka, tequila, and rum there wasn’t a great deal in them! To his credit Shaun sunk everything that was offered to him in good spirits and managed to keep awake although he did start professing his undying love for everyone, including the waiter.

The waitress in the Augustiner beer hall challenging Samwell and Jonno to lift seven full steins of beer in one hand. Sam cleaned it first time with the grunt of a turkish weight-lifter but Jonno only just managed it with a whole lot of shaky-hand patheticness involved. How on earth do those waitresses carry 15 or 16 at once? Unbelievable.

Best moment of the weekend – After a couple of beers in the huge Hirschgarten we started wandering back to the local U-bahn station. Only about 10 minutes walk so big deal except it started to rain. Not just rain though. In about 30 seconds it went from dry to full on thunderstorm and bucketing down. We were all soaked to the skin immediately! No point in looking for cover or sheltering as we were drenched so the eight of us just jogged and walked back through the park and through the streets back to the station. I’ve never been so wet in all my life! It was actually fantastic. 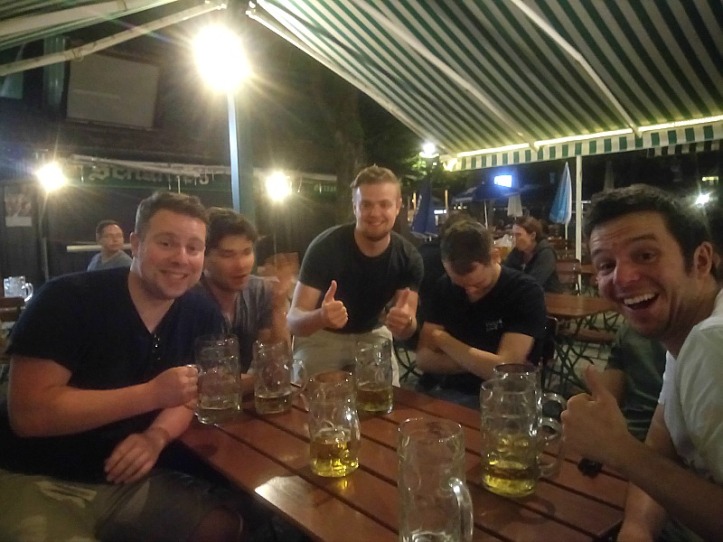 The really bizarre thing was that as we reached the Hirschgarten station, got the train, got out at Munichs main station and got something to eat, we were the only people that were wet. The only ones! Everybody else was bone dry. And as we sprinted out into the rain again to reach our sports bar, once again we were the only wet ones in there. So funny and what a moment.

How was the Stag ?

The whole ‘stag trip‘ was a complete success and everyones thanks must go to his brothers for all of their hard work in arranging it plus to all of the ‘stag guys‘ that came along to share Shauns special weekend. It was the perfect mix of the best people and hopefully Shaun enjoyed it as much as I did. None of the eight of us would have missed it for the world. 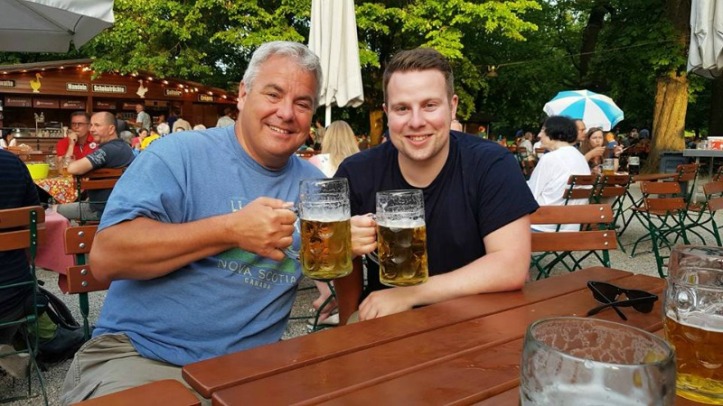 Looking forward to meeting up in a few weeks for the big day when we gain a beautiful daughter-in-law and celebrate Shaun and Katies wedding (An English Country Wedding). We can’t wait. But first we have a little trip planned up North………….