Another catchy post title to lure you in. Ha you fell for it again!

After breakfast in the Africa house with an assortment of over-nighters, the four Belgian walkers and two Dutch cyclists who had their dog (Kiri) in a trailer, we prepared for our adventure to visit another of Tonia and Andre’s overnight accommodation venues.

They referred to this as the Gypsy Caravan which is located on a camp site about a kilometre from our garden room.  On closer inspection and a detailed explanation, it appears that said caravan was originally a tea trailer for workmen.  We have seen of these here on building sites here and in Germany.  They look like small railway wagons but are on wheels and are towed to wherever the construction work is taking place and used as a tea/lunch hut, rain shelter and office.  Evidently they were given the derelict old trailer and after a bit of investigation found out that the wood of the chassis and structure were  basically sound.  They tracked down a company in Utrecht who would convert it for them to a small dwelling to their design (just like George Clarke’s small spaces or I think there is a new one on about sheds).  I wished we had seen the “before” pictures because the “after” was very impressive.  Two beds, two storage units for clothes, two armchairs, a coffee table, fridge, kettle etc and outside tables and chairs under a gazebo and a huge gas BBQ.  All the furnishings had been hand made by Tonia in very bright, beach hut type, fabrics. Toilets and showers were courtesy of an immaculate brand new toilet block a few caravan pitches away.  It felt like a holiday from our travelling accommodation, if that makes sense. 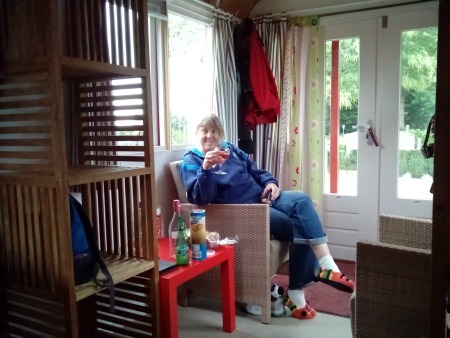 Tonia told us that there is a dutch clown called Pipo and he has a lady friend called Mama Loo.  They travel around in a gypsy caravan so Jon was Pipo and I was Mama Loo for the evening.  Although the gypsies, tramps and thieves (not this one quite yet but we will have to see how the budget holds out) seems somehow to fit us better. 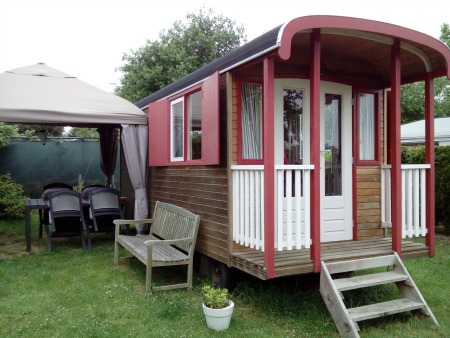 It was a shame that the weather was quite rainy because we couldn’t take full advantage of the outdoor facilities but it was good fun to stay there and very kind of Tonia to let us stay there as it meant more cleaning and washing for her.

It was a strange weekend really because Tonia and Andre had gone on a training cycle ride (60km) a day to prepare for her summer trip to Rome and his to Berlin.  Because they were away there were no other B&B guests to share stories with and we had the keys and use of all three properties.  We nearly offered to take in some guests for them (for a small fee of course!).

Saturday saw a little more rain (please stop sending this over from the UK now thank you) but in the evening we headed off to Molenhoek to see our friends Andy, Anya and Anouk.  Evidently dinner was in his freezer with our name on it,  a delicious Beef Wellington. So after a Briggs & Ringwood building project, a superb lego two storey affair which evidently had equity in it.  Minor adjustments were required to the layout due to some very strange bathroom arrangements designed by Jon.  All this effort gave us an appetite and the Wellington was a culinary triumph.  Dessert less so because the frozen pudding which was in Jo’s freezer with their name on it, should not have been thawed prior to serving.  A very tasty caramel puddle it was too.  When the Briggs’ are hosts various bottles seem to arrive at the table with the coffee.  This time it was mead, a honey based 14% medieval refreshment. Delicious it was too and certainly kept the cold off on the damp ride back to the garden room.

We have managed to get out every day but the rain has put paid to the long cycle rides over the last few days.  The forecast says it is due to change in the next couple of days so we have planned a repeat visit to Kranenburg as the ride there was picturesque (through the Reichswald) and hopefully to Grave (best shot at phonetic is Graarfe). It is on the river and we would like to see it before our last week here in Holland runs away with us.

We can’t believe we will soon be packing up to move further South but we intend to make the most of every day we have here in Holland before it is dankjewel and vaarwel.