Burg Deutschlandsberg (or is it a Schloss?) 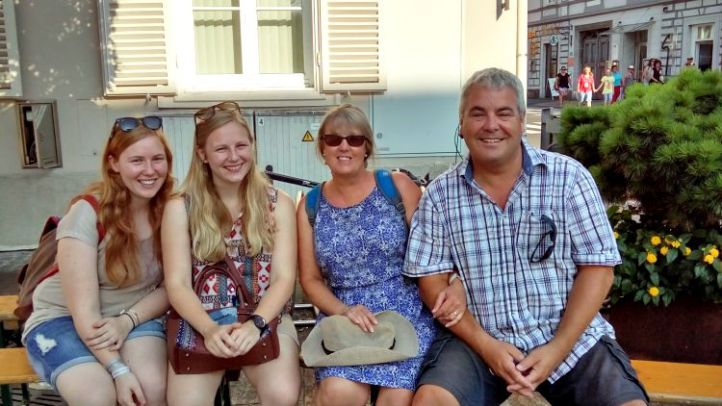 Let the exploring begin! Having got our bearings, courtesy of our hosts daughters, Magdalena and Marie-Therese (just Marie to us), we began exploring on foot and by bike.

Our first expedition, on foot, was to Groß Sankt Florian.  We knew there was a sports centre there and a Fire Service Museum, where Magdalena works, but apart from that we knew nothing.   As we approached, we could see the church spire and it looked like a small rural town.  However, following our visit, we can still only report that there is a sports centre and Fire Service Museum there. Oh yes, there is a small supermarket as well.  It felt like a ghost town.  Plenty of houses, the aforementioned church, school and a restaurant but it was like a place time had forgotten.  It was a scorching hot day so it was a quick trip to the supermarket for drinks and a lolly each then a hot walk home.

Our second expedition involved getting the bikes from the massive barn.

We took the cycle track to Deutschlandsberg our nearest town.  This was a much more successful outing.  We needed to locate food shops and our nearest bank. We headed to the old part of town first.  We found lots of nice places to sit and watch the world go by.  There is also a castle, Burg Deutschlandsberg, up on the hill behind the town which you can walk to.  This started a whole long conversation about the difference between a schloß, burg, palace and residenz.  I don’t think we came to an answer.  If you know please send us a comment. We have made a mental note of how to get to the Burg and will do that on a day when it is a little cooler.  Having located the much needed bank and downed a drink outside a very pleasant butchers/hotel/bar, we headed to the retail park outside of town.  It had loads of shops, even a C&A (remember those?).  We stocked up and loaded up our bikes and backpacks for the 20 minute ride home. 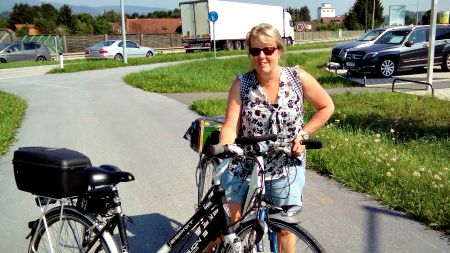 Magdalena and Marie have been brilliant to us while their parents, our hosts Eva and Ottmar, went away for a few days.  They have cooked a couple of times and invited us to join them.  We had a delicious pizza and a traditional Austrian dish called kaiserscharrn.  Evidently the name comes from Kaiser Franz Joseph I, it was his favourite dish. Yup I am back on my Kings of Europe “must know” quiz facts. This was answer 1.  The dish is basically shredded pancakes.  We had ours with icing sugar and peach jam.  They were scrummy.  Quiz answer 2 is that Kaiser Franz Joseph (KFJ to his mates) was the Uncle of Archduke Franz Ferdinand and we all know what happened to him in 1914 and what that led to!!

M&M asked us if we would like to go to something that sounded like Lastrada in Staines in the evening.  We, of course, said yes.  So after setting off with them and their friend, Sarah, not knowing where we were going or what for, the strangest of events followed. The town was actually Stainz, not Staines, and it was about a 20 minute drive.  We gathered with around another 100 people in the town square waiting for something, we knew not what.  At the stroke of 7pm, seven ladies and gents strolled out of one of the old buildings in the square.  They were all in their 70s and each was carrying a tray with a glass of water, what looked like a yoghurt and a bowl of soup or gruel.  They all looked completely bonkers and reminded me of zombies from the way they walked. They started to wander around the square like they were lost or couldn’t find something.  Jon and I looked at each other and thought, “What is going on?”.  The old folk then lined up and started a procession through the town.  We all followed along accompanied by music.  Every 100 metres or so they stopped and did a little speech.  The first one they mimed and it was played in German but from then on they spoke or ranted in English.

As we moved round the town, we got the gist of what was going on.  They were acting as escapees from an old peoples’ home and were looking for people to adopt them.  They shouted on about being treated as crazy, given poor food, put in nappies and all those degrading things that can happen to make them lose their dignity.  It lasted about an hour and ended up with them all smashing their trays on the floor and driving off all hanging out of the doors and windows of a car.  Not before one lady ripped her dress open in an act of defiance about getting old (or she just liked to expose herself).  At this point all the girls looked straight at Jon in horror.  They looked relieved that we were just laughing.  I suppose the motto is “Young at heart” or “Don’t treat me like an idiot just because I look old” or “You’re never to old to flash your boobs”.

We discovered that La Strada is a series of plays, music and entertainment put on by a travelling French theatre company. Having recovered from this shocking end to the play, we hot-footed it from there to the park where there was a one hour display by acrobats.  The group were called Collectif de la Bascule. It was more than just an acrobatic display.  They danced, dressed up and did a lot of silly falling over.  Brilliant.  Once again, Jon and I had that feeling of how can this be happening?  One week ago we were not even in Austria, let alone hearing of Stainz and La Strada.  The philosophy of being open to everything certainly makes things come your way. 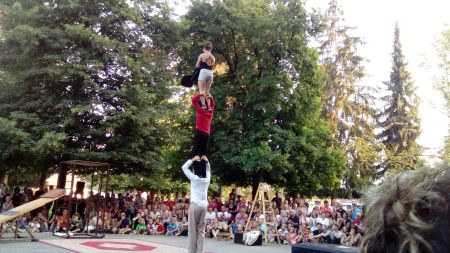 All theses exciting escapades and we have only been here one week. We have traditional folk dancing and mushroom picking planned this weekend end.  Hopefully everyone will be fully clothed (and that includes Jon!) No apologies for one final view of the garden.  Paradise in Vochera! 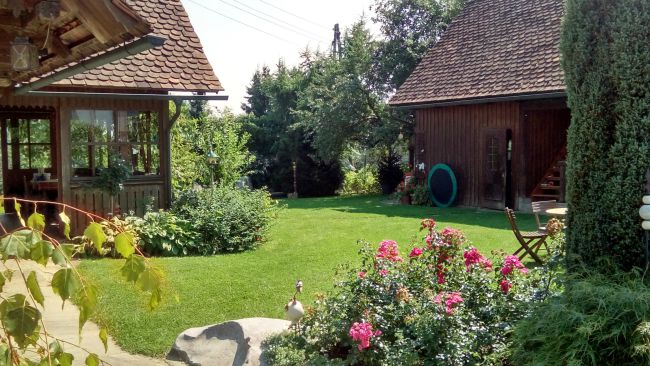