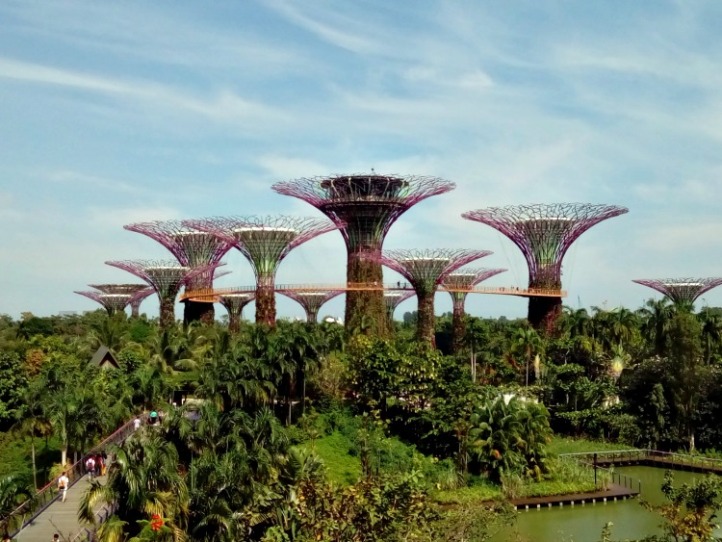 ‘Majulah Singapura’. Meaning ‘Onward Singapore’, it’s the motto of the country and the national anthem and you can see why as soon as you arrive in the country. 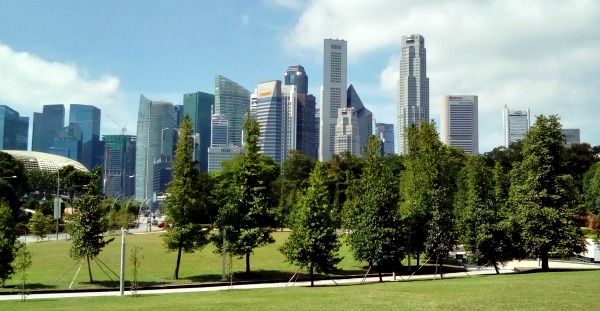 When you look at the map of the world it really does look like New Zealand is right next to Australia, you know, just a short hop across the water. Not a chance, it’s miles away. Our Emirates A380 flight from Auckland to Singapore went via Brisbane where we had a bit of an overnighter to look forward to. And the flight to Brisbane took 4 hours! That’s as long as it takes a Gatwick flight to get to Moscow for goodness sake. The distances this side of the world are just immense.

We had the usual issue of Jo not being able to decide what film to watch of course. When they offer 800+ movies they really are asking for trouble. She did pretty well this time and managed to make up her mind quickly and watched Legend before we landed in Brisbane. Great apparently. The long 6 hour wait until our 2am flight was very very lonely as we were virtually alone for most of the time. Soon passed though as the Boeing 777 got us to Singapore in a sleepy 7 hours. What blew my mind though was that it took four of those hours to leave the Australian mainland, it really is a huge country.

Early morning in Changi Airport Singapore and as we left the building we were hit by what felt like aircraft engines blowing right in our faces. The heat and humidity were just unbelievable. Singapore is just 90 miles north of the equator so it’s not surprising but it did take our breath away a bit. Our hotel had laid on a shuttle bus so we were soon on our way to the Grand Mercure Roxy Hotel. We’d have loved to have booked an Airbnb here but just felt that a hotel would be easier for a couple of nights, maybe next time.

To say that we were shattered would be an understatement, we were virtually dead on our feet after 17 hours travel with hardly any sleep. But we desperately didn’t want to waste any of our valuable time in the Garden City so found a local bus and headed for the city centre. One of the things Singapore is famous for is the Raffles Hotel, built by us British in colonial times when this was a vital part of the empire. Although we generally operate on a strict JWalking budget we had decided that we would splash out and visit Raffles for a Singapore Sling. The Sling was designed especially for the ladies at a time when it wasn’t deemed decent for women to drink alcohol by the famous bartender Ngiam Tong Boon.It’s a mixture of fruit juices and more importantly gin that looks like a colourful fruity cocktail.

The Long Bar at Raffles is the place to go for one of these famous tipples so we wandered up through the incredible courtyards and staircases of the old colonial club to try one out. The bar didn’t disappoint, neither did the drinks or the massive complimentary bag of peanuts. The price did however, wow! I had to eat a ton of nuts to get my money’s worth! It was worth it of course as it’s a unique experience in a wonderfully historic place. We wouldn’t have missed it for the world.

A wander round War Memorial Park and through some wonderfully air conditioned shopping malls followed before we hit a wall and had to make our way back. I think we made it to seven o’clock which was actually fairly decent after not sleeping for nearly 40 hours. An amazing nights sleep followed.

Hop On Hop Off

We’re not massive fans of tourist buses but we decided to go for one of those Hop on and off buses so that we could get round all of the city and catch all of the sights. We just didn’t have time to do it ourselves unfortunately. After finding the bus, which wasn’t that easy, we went for upstairs outside covered seats. It all seemed a little wet up there as the driver had just finished cleaning the bus but we weren’t bothered as the bus pulled away. Perhaps we should have been bothered though as a massive wave of water broke from the front and raced back soaking our feet in the process! Every turn or brake caused waves to crash from side to side and front to back causing absolute havoc with everyones feet. We obviously put our feet up but had a hysterical time after every new set of passengers came upstairs and were shocked by the bus water wave breaking over their feet! It was brilliant.

The tour was almost as good as the whole wet feet scenario taking us through Little India, the Arab Quarter, and the central colonial block before we jumped off to explore Chinatown. As you may have guessed, Singapore is a real multi-cultural city with really distinct areas for different nationalities. Over 70% of the population is Chinese and another 20% is Indian, with the actual local Singaporeans seemily in the minority. It makes the city so interesting.

The commentary on the bus had mentioned a huge 5 storey Chinese temple so we thought we’d go and have a look. It was fascinating to experience a real Buddhist service and watch as the rows of monks chanted and prayed leading the congregation in prayer. We were a little worried that we were intruding and that we shouldn’t be there but they welcomed everyone in to stand at the back and even tried selling us candles and souvenirs. The whole temple was incredibly colourful and had a really peaceful atmosphere, we were fascinated by it all. So much so that we went up to the Buddhist museum on the thrid floor to learn all about Buddhism, read about the history of the religion, and discover what all of the different symbols and stories meant.

A walk through the Chinese markets followed where we went for some authentic street food to keep us going. 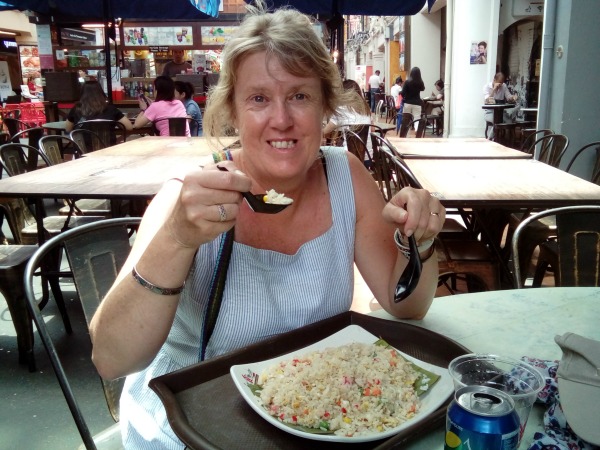 The plan was to hop back on the tour bus and complete the circuit of the city. So we waited at the appropriate bus stop. Just as the bus was due an old Chinese fella approached us and started gabbling and pointing. We didn’t have a clue what he wanted but he kept on. He clocked that we were Engllish and just shouted ‘Wrong Stop! Bus at Next Stop’. What a helpful guy! We leapt up, grabbed our bags and hightailed it along the road as the bus approached. Obviously it sailed right past as we waved and flailed our arms around. What was happening? We ran back to the original stop just as the old guy disappeared around a corner. Did he make a mistake? Was it a deliberate ‘joke’? We’ll never know, but I could swear that I heard him laughing as he walked away. Not funny at all old man! 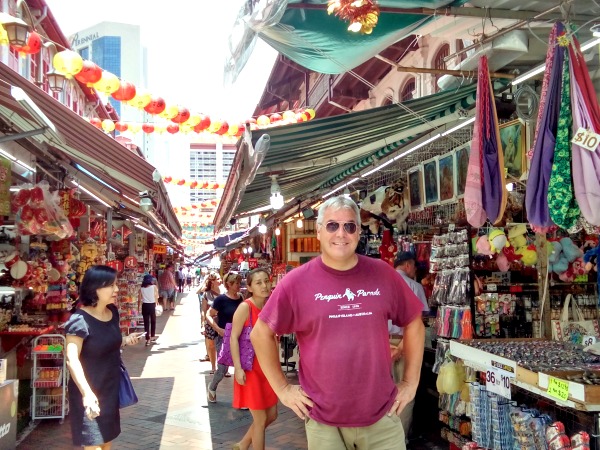 The Bay and the Gardens

Another bus soon picked us up and we got all the way to the Bay where we jumped off for another wander around. Now, let me just say that the city is unbelievably modern with skyscrapers everywhere and new cool buildings all over but it does have a character all of its own. We hit the boardwalk to walk along the waters edge and get some great city views. The views were indeed great but the humidity was even greater. In fact, we soon realised that we were virtually the only people outside. It was deserted. Why? Too hot to do anything at all. After half an hour we just had to get inside and as we dived through a big glass entrance we found where everybody was. Shopping!

An enormous 5 storey shopping mall, air conditioned of course, was absolutely packed with people. This was where they all were. There are actually so many malls in Singapore and so many underground passages linking those malls that I am sure you could almost cross the whole city in air conditioned shopping heaven. Amazing. As you know we’re not interested in shopping at all but it was so cool and there was a surreal waterfall and river complete with punts actually 3 floors underground.

After some final exploring of the Gardens by the Bay we got the bus back to our hotel. Jo had done her homework as usual and found that it was 2 for 1 night in the hotels Malay restaurant so we decided in an end of JWalking posh meal out. Not like us at all and I must admit we felt a little strange being waited on and being able to choose whatever we wanted, but it was fabulous. I’m not sure how many courses we both had but it was an unhealthy amount and we loved every mouthful. A great way to finish up.

The Flight of Our Lives

Next morning bright and early we set off on our 15 hour flight back to the UK. With a short stop in Dubai we were hoping to watch the odd film and get a few hours sleep. It didn’t turn out that way at all. In fact it was the most unbelievable, incredible flight of our lives. I’ll tell you about it next time. Don’t forget. 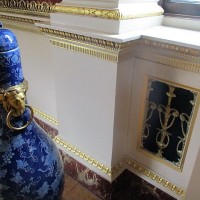 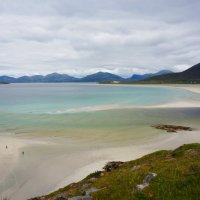 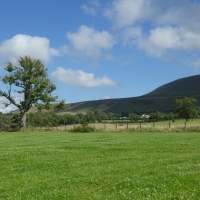