Hard to believe, but just three days after our eventful flight back from Singapore we were at Gatwick again.  This time we were heading to southern France to see Jo’s Mum and Alan (who is on paper my stepfather but the name has long been used “Alan” just feels right!). Our youngest son, Ryan and his girlfriend, Ella, both flight attendants with Easyjet decided to join us for the visit to rural France.

The flight to Toulouse was straightforward (thankfully) – probably because we had two crew members with us.  Ella seemed to attract a lot of attention. Perhaps she is really the Chief Exec but just poses as a flight attendant to throw other staff off the scent.

Our flight was to Toulouse in south west France and even though I had been an absent daughter for so long, we decided to sneak a quick visit to Carcassonne for the first night.  My Mum and Alan had treated me to a fabulous overnight stay there a few years ago and it it was the sort of place that I knew Jon would like to see.

It is a UNESCO World Heritage site and this area has been inhabited since 3500BC with the first fortifications being put in place around 100 BC by the Romans.  The city has had a very chequered past with invasions and occupations by the Moors and the Cathars, amongst others.  Over the years it fell further and further into disrepair and was struck off the register of fortifications under Napoleon. From the mid 1800s it was restored.  The authenticity of some of the restoration has been seriously questioned but there is still a substantial amount of original fortifications and it does make an impressive citadel.

After a late lunch and some very creative ice cream cones, we explored the inner city, ramparts and some of the 53 towers.  Fortunately for us, the tourist season probably starts around Easter so we almost had it to ourselves. 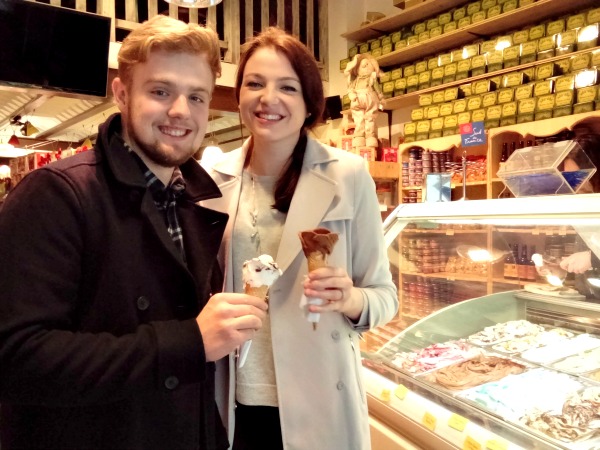 It had been recommended to us to go down to the town to the bridge over the river to see the floodlit citadel.  So as the light was failing, Ryan directed us down what was supposedly a public access path.  It was rather steep but we scrambled down, with the odd look over our shoulder to see how steep the decent we had made actually was.

All worthwhile for the view from the bridge……

A budget overnight room and budget breakfast then it was off in our little hire car to Saint-Antoine.  With blue skies all the way, two hours later we had our overdue reunion.  Ryan had not been out to France since 2006 so there was a lot of memories flooding back for him, introductions to be made for Ella and a lot of cheese to eat for me!!  The village is small and it doesn’t take long to do the highlights but it’s fame is that it is between Auvillar and Flamarens on the pilgrim route to Santiago-de-Compostella on the west coast of Spain.  During the summer months you seen the odd group of walkers heading for the village and the local gite for overnight accommodation.  The evening involved a huge roast lamb dinner (including must missed yorkshire puddings) and a cheesecake that had survived some sort of culinary catastrophe en route from the baking tin to the serving plate but looked and tasted superb. The conclusion to the evening was sitting in front of the huge log burner as cosy as cosy could be.

Valence d’Agen (or locally just known as Valence) is the nearest local market to Saint-Antoine and we topped up on the essentials, bread, vegetables, olives, eggs and MORE CHEESE before coffee in La Tout va Bien.  All the produce was fresh, seasonal and local and once again it gave us all a reminder of what a rural French market is like.

We had booked lunch out – partly as a belated birthday meal for Mum’s “special” birthday that we missed whilst on our travels.  We drove to Gramont. It is a small village perched on the top of a hill with medieval fortifications and, more importantly, the restaurant Le Petit Feuillant.  It is like walking into someone’s home.  Each room contains a couple of cosy tables and our little area had a huge fireplace with logs crackling away.  Then we get to the food.  Well it doesn’t stop coming.  Little appetisers, both drinkable and edible, followed by soup, salad, main course (duck or pork) with four or five different vegetables, cheese, two types of pudding and free wine! 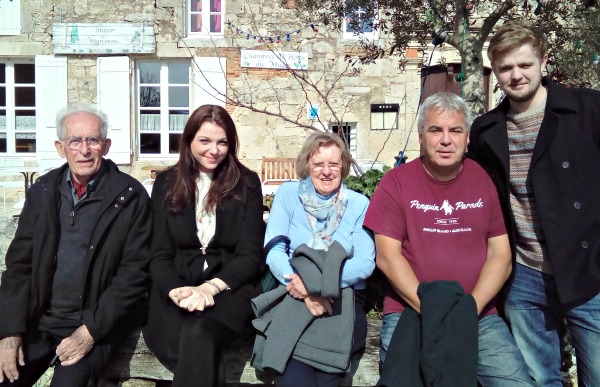 The  lasting outing of our visit to France was to Lauzerte.  This is a medieval bastide and is described by some as one of the most beautiful villages of France.  It was founded in the 12th century and is also in the same valley and on the same pilgrim route as Saint-Antoine.  It was a bit chilly but we had a quick scout round, Ryan posed for the “must have” photograph then we headed to the Salon de the for crepes and galettes.  For those not in the know, galettes are savoury pancakes that get filled with a variety of fillings. 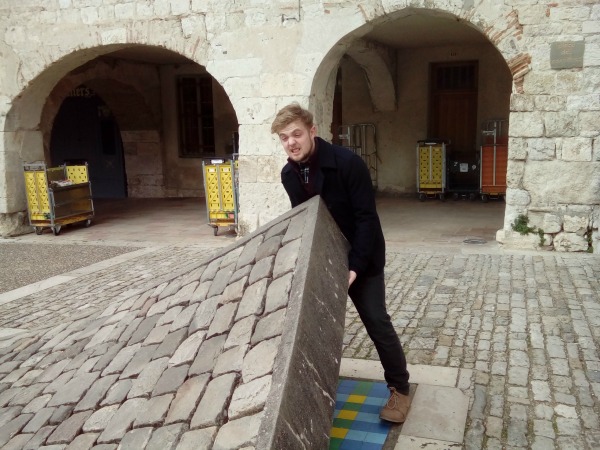 Then it was home to attempt to consume the glut of cheese and finish the jigsaw puzzle before saying a fond farewell to Mum, Alan and France.  It was a lovely, calm, relaxing few days in a tranquil haven and always sad to say goodbye to Mum and Alan till we return again.  In fact Jon and Ryan were so relaxed while we were there they even powered down a few times!