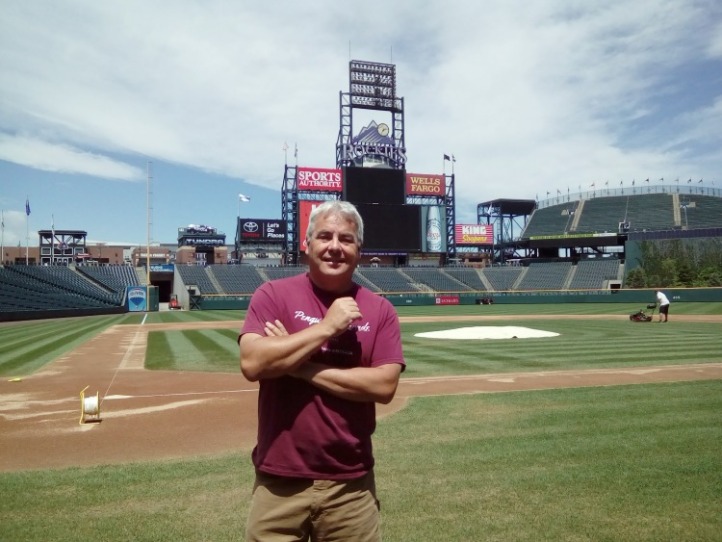 Every photograph of Denver features the Rocky Mountains in the background but there is so much more to the Mile High City than that. We’d done a fair bit of general exploring in our first week but had pinpointed a few places that we really wanted to visit.

Top of our list was a tour around Denvers baseball stadium, Coors Field. The Colorado Rockies are the citys Major League Baseball team and have played in the city since 1993 when the team was formed. We had walked past the stadium previously and booked ourselves on one of the official tours. It’s called Coors Field of course as it is sponsored by the citys major brewery Coors.

Quite a few people were in our tour group with most from the USA, places like Texas and Oklahoma, but there were a couple of other non-Americans from Germany who like us had little understanding of baseball and had never heard of any of the players. The guys running the tour knew everything there was to know about baseball and especially the Colorado Rockies. As we wandered round the pitch-side, the changing rooms, and the stands they threw bucketloads of baseball information at us which the Germans completely ignored and we occasionally struggled to take on board. Fascinating stuff though.

Jo thought it was particularly funny when we were asked at the ticket office if we were concessions. The guy meant ‘were we over 55’? I mentioned that one of us was but he kindly gave us both concession tickets. Is that it now? Is this the slippery slope to a bus pass? 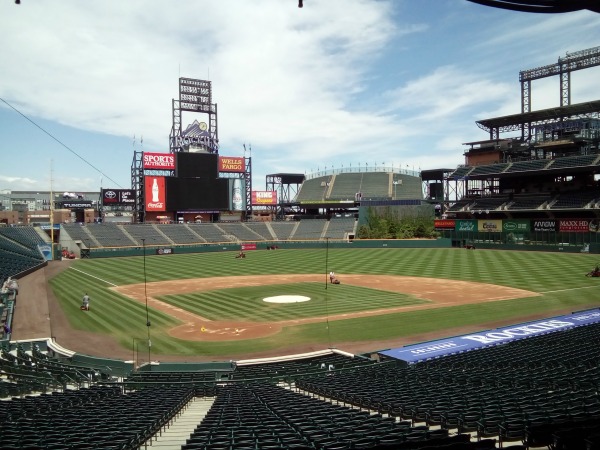 One of the most amazing facts is that as the stadium is a mile above sea level the ball travels much faster through the thinner air and therefore big hits and home runs are easier to score. So the designers made the pitch a lot bigger than standard and Coors Field now has the largest outfield in Major League Baseball. It’s still the most hitter-friendly ground in the US though. 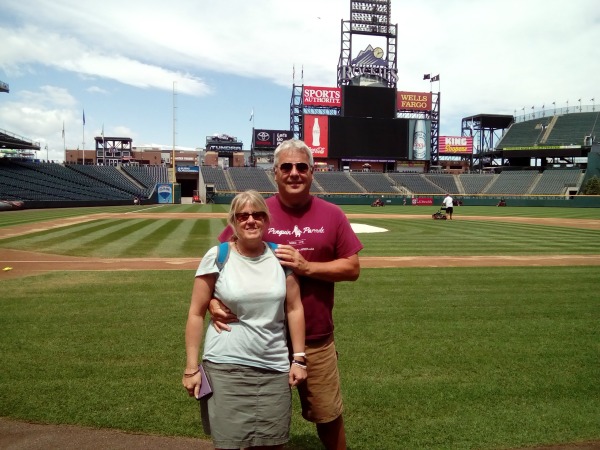 The stadium holds 50,398 but used to hold several thousand more until a couple of years ago when they stripped off the top tier on the east stand built the Rooftop. This has two bars, soft lounge seating, a stage for local bands to perform, a barbeque area, a burger bar, grill bar, all in an urban garden setting. Oh and you can also watch the game from there if you like! Unbelievable. Can you imagine that being done at Old Trafford or Stamford Bridge?

The tour was brilliant and we left thinking that we really should go to a game. Another amazing fact they mentioned was that one of the stands is set aside for $1 tickets for every game! One dollar! We decided to get back to our lodgings and watch a couple of games on TV and decide whether we fancied going to a live one. 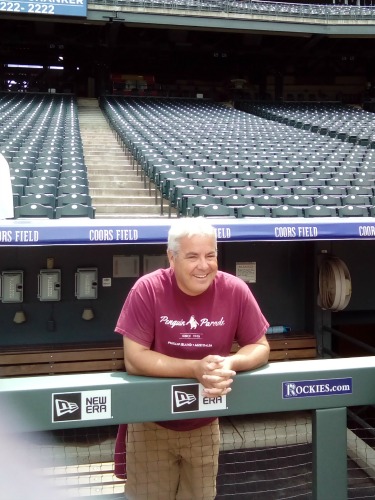 Obviously after all that baseball trivia we really needed a beer so we crossed the road and went into one of the local breweries right outside the ground. The Denver Chop House and Brewery looked amazing and the beer was even better.

Money Museum and the Bear

Another long walk down 16th Street, the bustling centre of Denver, and Jo led us off towards the Federal Reserve Bank. This is where the Denver Money Museum is located and after a thorough search of our persons and bags (Jo set off all the alarms as usual) we had a serious look around the free museum and even got to design our own banknotes and get our hands on some shredded cash.

On the way back to the Civic Centre station we passed the Convention Centre where they have some sort of arty sculpture of a big blue bear attempting to look in the windows. Of course this was just an excuse to set me up for a photo with a bear (again). Funny huh? 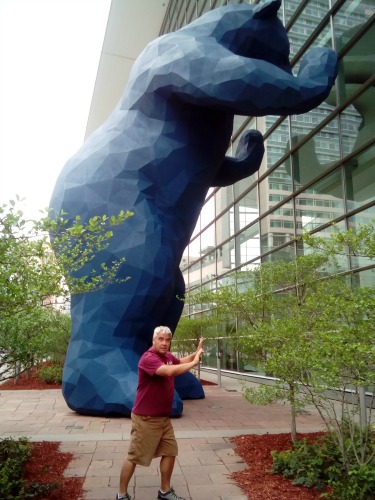 The Breakers and Fridays Harbour

As Jo mentioned previously we were staying with the lovely Lynette and Tony in their apartment on the Breakers Fridays Harbour complex. Our regular walks around the lake in the sunshine looking at the wildlife and the incredible scenery had us day dreaming about it being somewhere we could settle someday. Also, we particularly liked the clubhouse and the Riviera Bar.

Tuesday evening saw us having a spot of dinner there with a few drinks, very nice indeed. Plus the bar staff started recognising us as locals and having a chat which was even better. We love being locals! 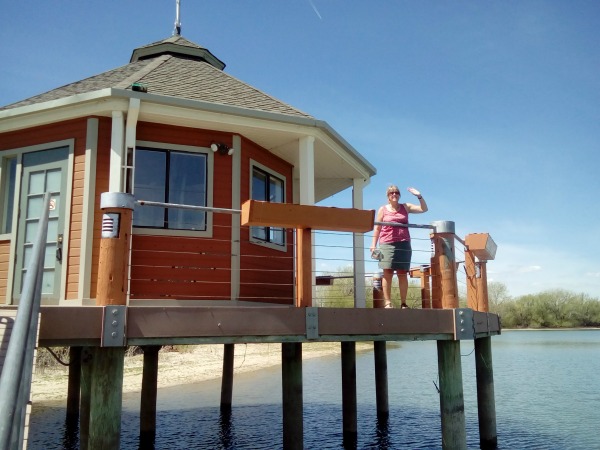 Something we always like to do in places that we visit is plan our own long walk via locations and sites that other people don’t generally go to. So we set off on the Classic Denver Hike (CDH) to do just that. A short bus ride on the number 73 got us east of the city to the Frank Thomson park and we set off from there. A fairly long initial stage along the quaint seemingly posh 23rd Street took us right into Denver Zoo.

We weren’t planning on entering but grabbed a coffee, nosed around a little and watched all of the excited childrens faces as they came out. It looked like a great zoo but the CDH plan didn’t include monkeys so we carried on into the City Park and made our way down York Street to the Denver Botanical Gardens. You all know by now how we love a botanical garden so we stumped up the entrance fee and had our lunch overlooking the beautiful gardens.

Could say lots of stuff here about flora and fauna but I’m not gonna! Lets just say it was very nice.

Then onward to Cheesman Park with its impressive, but strange, Greek temple. Stranger still it was full of big black guys dancing to hip hop in the middle of the afternoon and thoroughly enjoying themselves. Finally a short walk along 13th Street and up past Molly Browns House to finish the CDH at the Capital State building. We reckon we did just over 9 miles and it certainly felt like it when we got back to Lynettes. So a quick drink at our now regular watering hole, The Riviera, and collapse into bed. What a day, what a walk. We really should do this in every city as you see so much and get a real feel for the area. 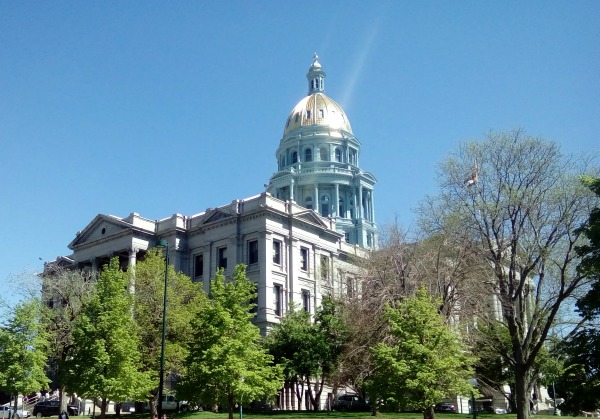 Finally, and just because it interests me and makes me laugh, here are my top ten facts about Denver that not many people know (snappy title!).