The Famous Chicago Cow and Other Ramblings 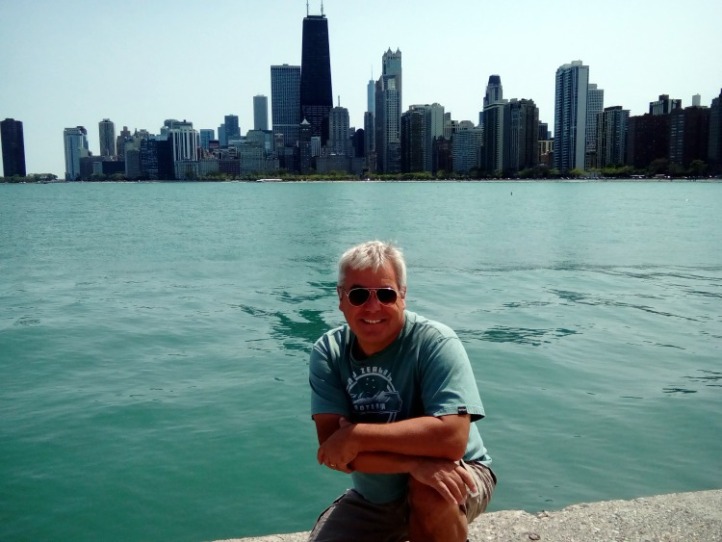 The Great Chicago Fire, Al Capone, the tallest skyscraper, oldest baseball field.  All of these are among Chicago’s claims to fame.  So we could find out more about each one we decided that the Chicago History Museum was worth a visit (and we had a voucher!).  After a bit of negotiation with the ticket office, it was finally agreed that I could take my small bag in with me.  The problem seemed to be that it had two straps to put it on like a backpack but it is about A4 size. At other museums I had been encouraged to hold it by the handle like a handbag so that no exhibits were accidentally knocked.  However, Mr Jobsworth wasn’t happy.  I nearly started to take my purse and glasses out to leave it in the cloakroom, when I saw a lady go by with a massive leather backpack.  I made this very point to Mr Jobsworth and told him that I was taking it in whether he liked it or not.  He assured me that the museum staff around the exhibition rooms would send me back but I said, “That’s OK with me”.  Jon just looked on, suitably embarrassed by this whole episode but there was a principle to all this and they needed to be consistent. 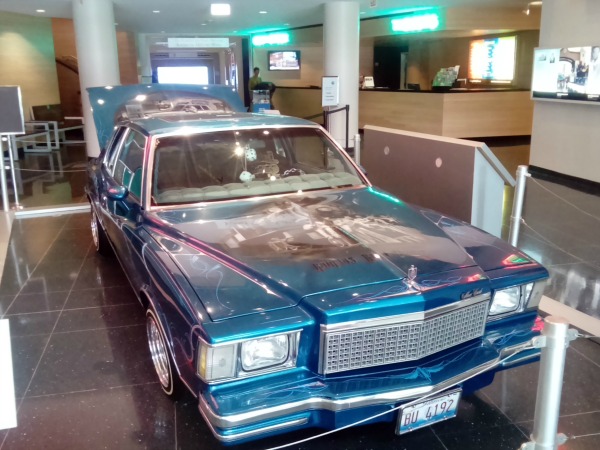 We set off to the viewing galleries and found out a lot more about the origins of Chicago, the Great Fire, of course, which decimated the city in 1871.  It raged for 3 days, 300 lives were lost and 3.3 miles of the city destroyed.  It was all about the “3s” you see.  It started on or near a barn owned by the O’Leary family.  One rumour is that it was started by a cow.  In that Mrs O’Leary was milking her cow and it kicked over the lantern. Udderly ridiculous!

I think the most interesting gallery for Jon was all about Abraham Lincoln and his assassination.  They had one of his carriages on display and the bed he laid in following the shooting at Ford’s Theatre in Washington DC.  He died of his wounds then next morning in that very bed.  Lincoln has a special connection to the state of Illinois.  He was an Attorney in Springfield, Illinois prior to his election and it is the only town that he ever purchased a home. Following his death his body was taken by train to 180 cities spread through 7 states before he was finally laid to rest in Oak Ridge Cemetery, Springfield Illinois.  His wife and 3 of his 4 sons are also buried there. We looked very closely at the photos of him from his election as President in 1860 to those taken just before he died in 1865.  The ravages of the Civil War had taken their toll and he looked a dangerously thin and drawn man.

For me, the most unusual gallery was called The Secret Lives of Objects. There were exhibits that had, until recently, been in storage.  It was as if someone had gone through picking out seemingly insignificant things and displayed them with a little card detailing what the objects would say if they could talk.  Most exhibits were not in good shape. A few examples are:-

It was a clever way to display meaningful historic items which would not normally get a second glance.  By now we were all historied out and headed for some fresh air but not before one last opportunity to get a few more Chicago facts. 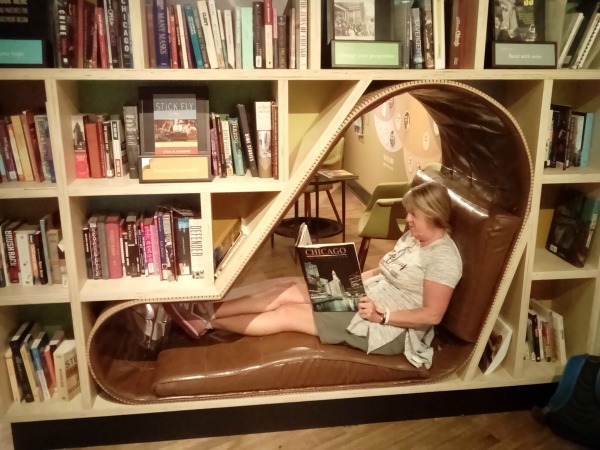 We went straight into Lincoln park to be faced with just what we needed.  No not ice-creams – more history.  There was an historic society playing baseball in kits from the 20s. Even the ladies fussing round a picnic table had long dresses and bonnets on.  Quite a picture.  (Author’s note:- The bag remained with me for the 2-3 hours in the museum. A small victory for a small lady.)

Jon and I had been debating whether or not to go on a boat trip up the Chicago River.  We had seen them go by and they seemed very informative about the architecture, etc but a bit overpriced at $44 each for a 90 minute trip. Instead we decided to “do it like a local” and take a water taxi through the city. 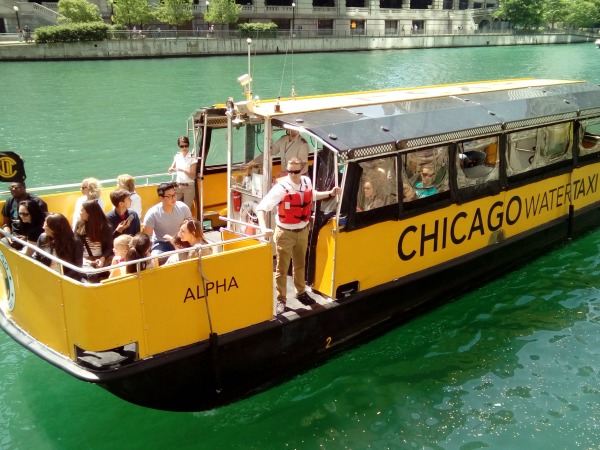 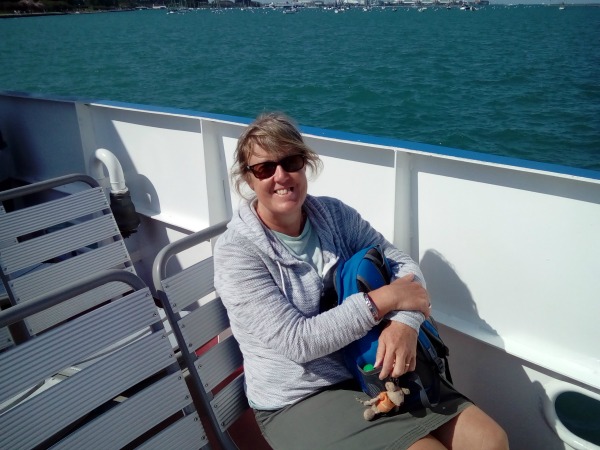 It was quite something to get the perspective of all the skyscrapers and bridges from the river – and only $4 each. Bargain!

Time was ticking away and we only had a few more days in the city so we pin-pointed an area we had seen very little of.  This was to the south of Grant Park where there was a peninsula that housed the Shedd Aquarium, the Adler Planetarium, the Field Museum and a large concert arena called Solders’ Field. 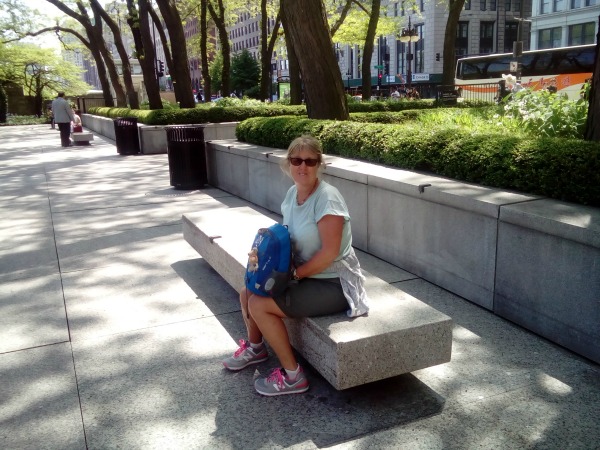 It was a long hot walk but the beautiful scenery of the lake kept us going and we ended up on 12th Street beach where there was a kiosk selling ice-creams.  Perfect. 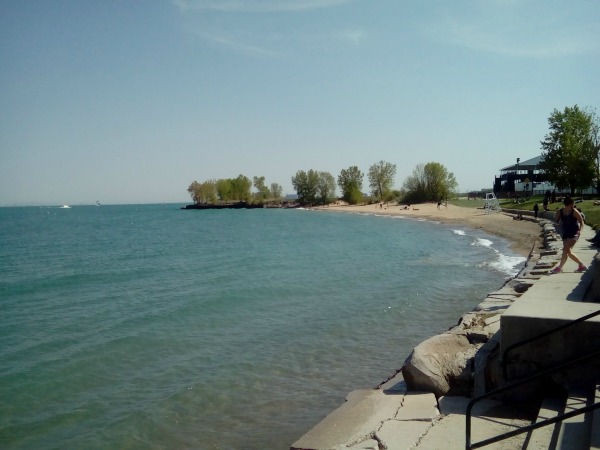 Over ice-creams we chatted about the museums.  They all looked great but we decided not to go. Instead, we stayed in the sunshine and got another Water Taxi across the harbour to the Navy Pier.  We had great views of the city as we cruised by. 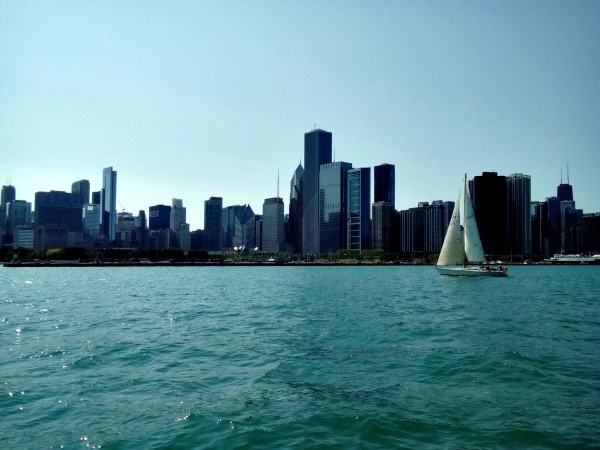 Off to the Burbs

Leaving day.  We were packed and ready to head off for a 10 day stay 30 miles west of Chicago.  It was planned as a bit of rest and relaxation after our busy sight seeing time.  The JWalking legs needed a little rest. We said our goodbyes to Mr Megaphone, Jordan, and caught a bus to the Transport Center.  A very helpful lady could see we were unsure of the stop we needed so she gave us some advice.  She had a small trolley bag with her so we asked if she was travelling.  She explained that she was a stenographer and this was all her equipment.  Such an interesting job and we talked for the rest of the journey about dialects and phonetics, so much so that we nearly missed our stop.

The Union Pacific West Line awaited.  It made Jon’s day that it was a double decker train. “Wow – Just like the one in Source Code” he shouted.  Hopefully it would be less eventful than the film. (No reason for this last photo – I just liked it. What a handsome chap.) 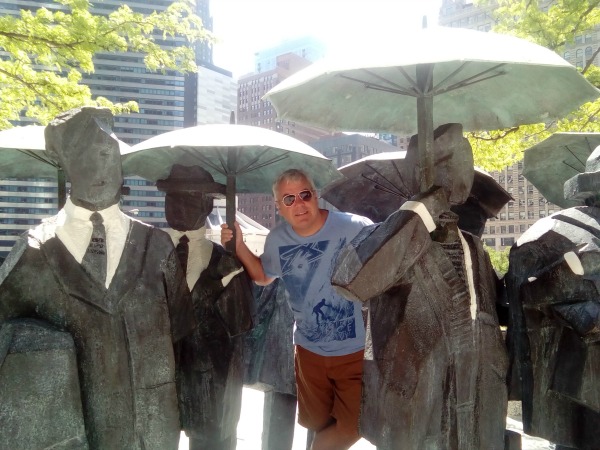