The Ultimate Guide to Chicago 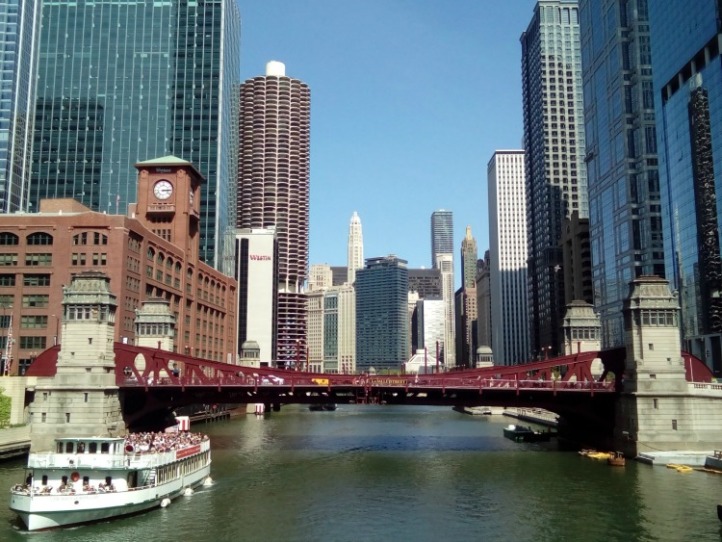 When we plan our little trips we generally know something about each location that we intend to visit. Chicago was different. We knew virtually nothing about the city except for the obvious gangster references and the fact that it was full of skyscrapers.

Why did we want to visit Chicago?

History and films. It seems crazy but all of the films depicting the city just screamed out that it was full of character and old historical buildings. As you all know by now we’re suckers for a bit of old stuff so it seemed like an interesting place to come.

Chicago is famous for skyscrapers and one of the things that you just have to do when visiting is go to the top of the Willis Tower. It was called the Sears Tower when it opened in 1973 and was the Worlds Tallest Building for the next 25 years. It hasn’t exactly shrunk but obviously there are now a few in Asia that are taller. It’s still one of the tallest in the world and is 1729 feet high, 110 floors, 104 lifts, and you can see 4 US States from the top (love that fact, Wisconsin, Michigan, Illinois, and Indiana). So we decided that we really had to go for it even though Jo isn’t a major fan of heights.

The Untouchables at Union Station

On the way though we visited the scene of one of my favourite scenes in any film. Union Station is a fabulous classic old railway station right in the centre of the city and inside is a big marble staircase where a scene from The Untouchables was filmed. You must know it, where Kevin Costner and Andy Garcia are staking out the station waiting for Al Capones bookmaker and there’s a slow motion shootout involving gangsters, police, and a pram with a baby slowly crashing down the steps. Just had to see the spot and obviously have a soppy photo. 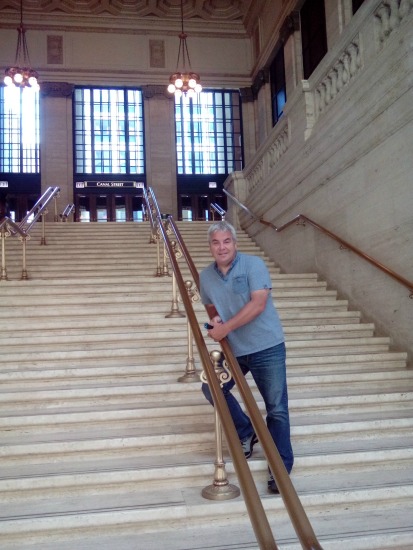 If you haven’t seen The Untouchables then shame on you, go and watch it now!

Big? Are you kidding? It hurts your neck to look up to the top. Chicago is full of skyscrapers but the Willis Tower dwarfs virtually all of them. There is an observation deck up on the 103rd floor called the SkyDeck so we queued with a few other tourists and took the superfast lift up 1,353 feet. Strangely Jo wasn’t at all nervous, perhaps it’s so big that it appears unreal. Who knows? The views were unbelievable. 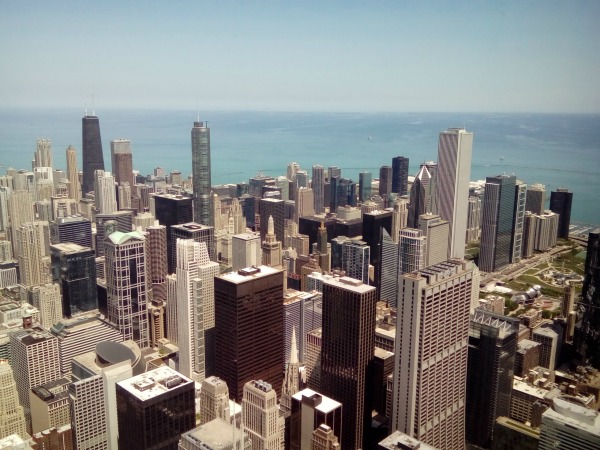 On the SkyDeck they’ve also installed something called The Ledge. This is a glass box that extends almost 5 feet out from the building, glass floor too. We had to try it obviously. It didn’t help that the two Asian girls in front of us got panic attacks and froze crying as they stood on the Ledge! Thanks a lot. Very bravely though Jo went for it. 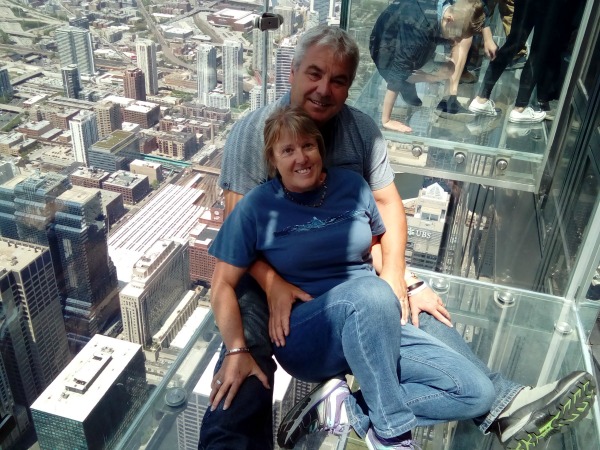 An amazingly surreal experience for both of us, it is almost so high up that it’s not scary. Does that make any sense? 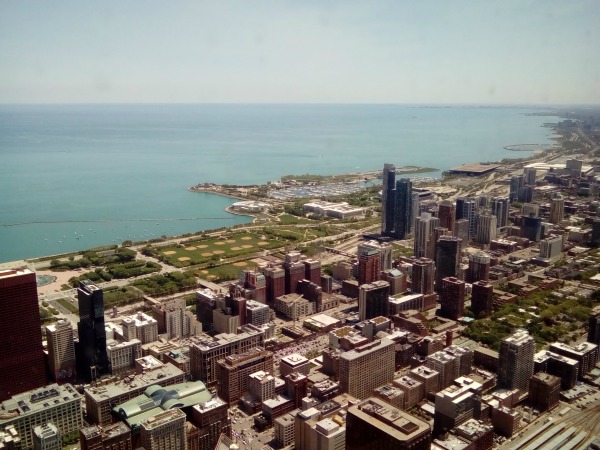 Such a great moment standing there so high and Jo did unbelievably well. 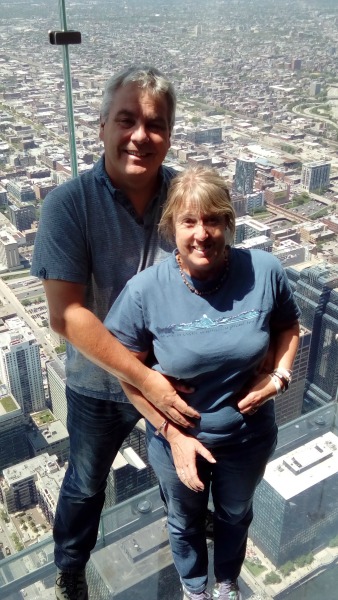 Leaving the tower we wandered along the river past all of the fabulous opening bridges and stopped for a bit of lunch watching the world go by. More people watching. On our walk we stumbled across the Bridge Museum. Actually the McCormick Bridgehouse and Chicago River Museum. Fascinating history of the river and all of the 20+ opening bridges throughout the city.

Then around the corner we saw a huge, shiny, loud, show-off type of building that screamed out ‘look at me‘ and looked completely out of place. The Trump building. It may be impressive but doesn’t seem to fit with all of the amazing 20s and 30s architecture around it. Some might say it’s a little like it’s owner, I couldn’t possibly comment …

A far more impressive building with real history was just around the corner and somewhere that both of us had specially wanted to see.

Built in 1925 the Tribune Tower replaced the previous tower that was destroyed in the famous 1871 Chicago fire. It’s a neo-gothic building 462 feet high and looks like something out of Gotham city, you could imagine Batman standing on the roof. 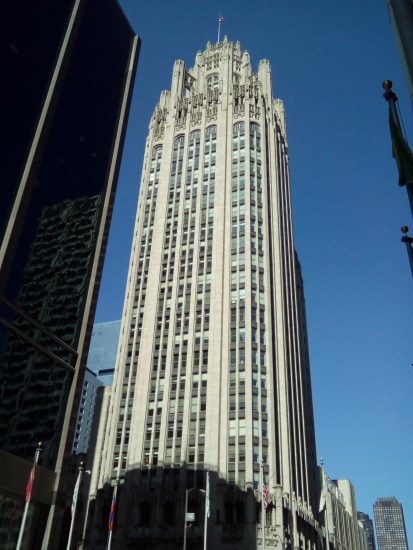 However, what we found fascinating was displayed around the ground floor of the building. In the early 1920s as the building was being designed the staff of the Tribune, Chicago’s major newspaper, brought back bricks and rocks from famous sites around the world at the request of the owner Major McCormick. Actually built into the building are rocks from the Berlin Wall, Taj Mahal, Great Wall of China, Twin Towers, St Pauls Cathedral, Great Pyramid, and the list goes on and on. We walked around the complete base of the building looking at hundreds of these fascinating displays. One of the most interesting buildings we’ve ever seen. 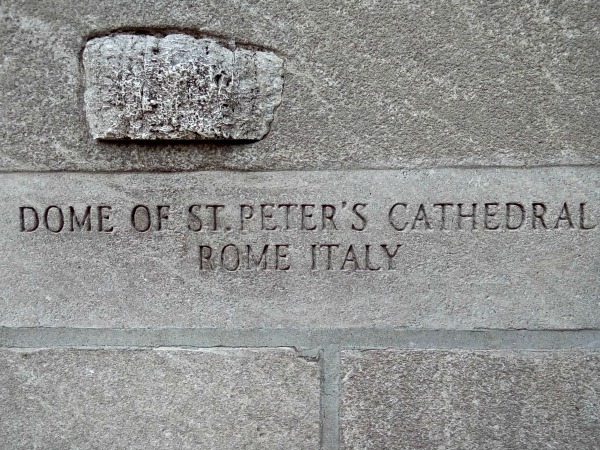 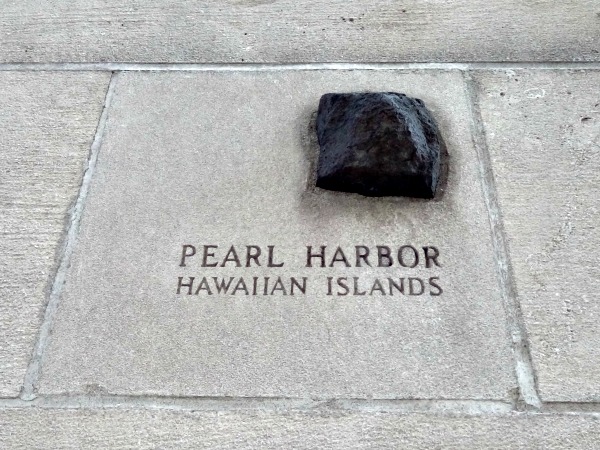 So a walk down the Magnificent Mile past all of the posh shops that we’ve never been in, and onto Water Tower Plaza where Jo changed the habit of a lifetime and went shopping! Not her thing at all but a bit of a necessity as her trainers were completely worn out so she had no choice. In next to no time she emerged triumphant from Macys with a new sparkly pink girly pair of dancing training shoes. 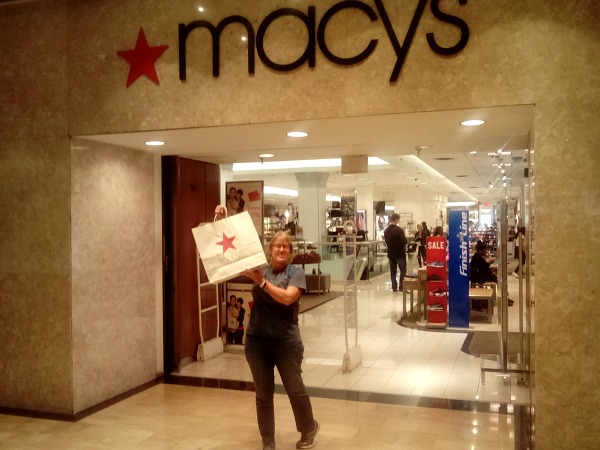 What a day. Oh must mention that on the way back to our apartment we passed the Hersheys Chocolate Store, full of every type of chocolate you can imagine plus they’re always giving out free samples! Free Samples! So a quick diversion through and a mint choc cocktail later we were on our way.

We had met a really helpful lady in the tourist information who worked as a ‘greeter‘ in the city and was full of good advice. All of the info about great restaurants and classy trips went over our cheapo heads of course but she did mention that the city zoo was worth a visit and that it’s free. Free? Ok. So next day where did we head?

Lincoln Park Zoo lies to the north of the city along the shore of Lake Michigan. We planned a quick visit and a stroll around what was bound to be a little petting zoo (if it was free it couldn’t be any good surely) but upon arriving realised it might be a more serious visit. It’s Chicago’s city zoo and is massive. We spent the whole day there seeing everything from lions and tigers to snakes and bears. Fantastic day out only slightly dented by the lack of any penguins due to that enclosure being rebuilt. 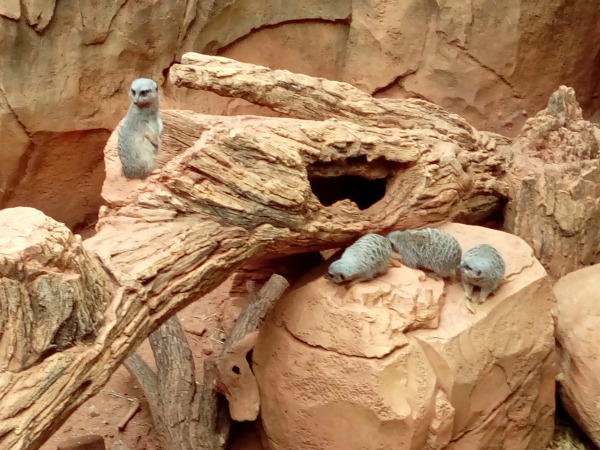 The most impressive animal we saw though was the rhino. I’m not sure we’ve ever seen one so close before.

Lincoln Park and the Brides

We planned on walking back into the city through Lincoln Park and our walk turned into one of those strange and weird moments that we often seem to experience. The park has a couple of nice lakes with picturesque little bridges crossing them and as we walked we saw a wedding party congregating on the main bridge. Bride and groom and multiple bridesmaids posing for photos with more guests and looking wonderful. How nice we thought. Then as we walked further we came across another bride with her entourage, all looking happy and smiley and again posing for more pics. Bit strange seeing two eh? Well as we looked across the lake there was another. Photographer and happy couple doing photos on the waters edge in a lovely setting. And waiting 30 feet away, another bride! They were everywhere! Brides galore. We felt like we were in some sort of bizarre bad movie. Yet another party awaited us as we escaped the park. She had the brightest dress of all. 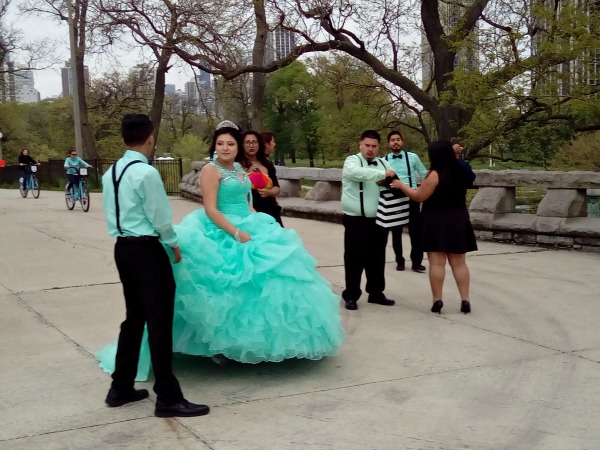 After a more relaxing bride-free walk down Michigan Avenue I persuaded Jo to quickly visit the Chicago Sport Museum at the top of Water Tower Plaza. I’m not sure if it would have been worth a proper tour around as we know nothing about baseball, basketball or American football but the entrance full of framed newspaper headlines and the hundreds of photos all over the foyer and bar were fascinating. I still wish there was more about the White Sox Baseball Scandal of 1919 but unfortunately they seem to play it down a bit, embarrassed a little I suppose. It’s the best sport story in their history I reckon.

So we’re loving Chicago completely. Such a shock that we like it so much but we’re looking forward to every single day out exploring the city and there are so many things to see and do. We could easily have stayed another week and still not seen everything. Looking forward to the next few days if we can manage to stay off the burgers of course! 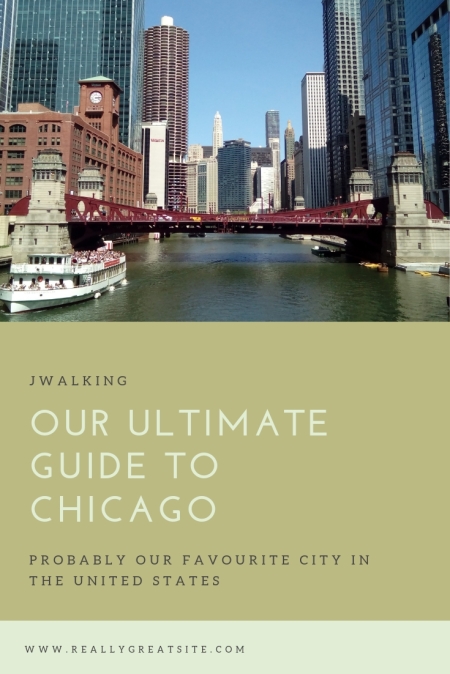