Excursions in Vancity, BC 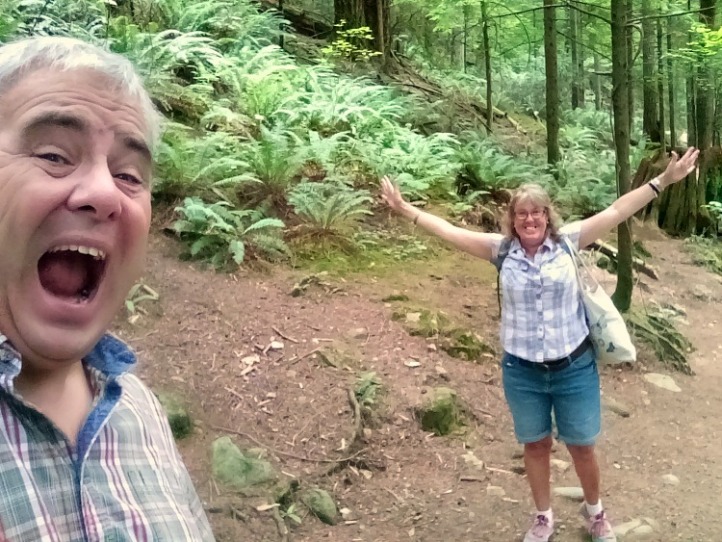 Recovery from the Vancouver Dilemma was swift.  (If you have skipped a few posts you may need to dip into the last one if you want to know what I am talking about – it was written in Jon’s classic “Peril on Flight 433” style.)

It was a dream to be in a proper comfortable Airbnb again and Sedi’s house was a real multi-cultural melting pot of guests in a great location near the Skytrain station to get into central Vancouver.  Sedi is a researcher, come interpreter, come realtor (estate agent to us) and host/landlady with her partner Brian and friendly dog, Shilo.  Sedi left Iran in 1988 and it was interesting to hear her perspective on the middle east, both then and now.  At the last count these were the guests we came across in the large house:

As I said, a real melting pot which worked really well.  We think the majority of the other guests were staying on a short term let basis rather then Airbnb but those we spoke to were all friendly and interested in our adventure.

First stop is always the Tourist Information Office.  The usual process is then to sort the good bits from the “let’s rip you off” attractions.  We had seen lots of leaflets and even a free shuttle bus to the Capilano Suspension Bridge and trails.  This was about a 15 minute drive from central Vancouver and was around CAN$40 each and evidently over-run in the summer months.  It looked good but we came across another location which is a canyon with a smaller suspension bridge, accessible by public transport and FREE! 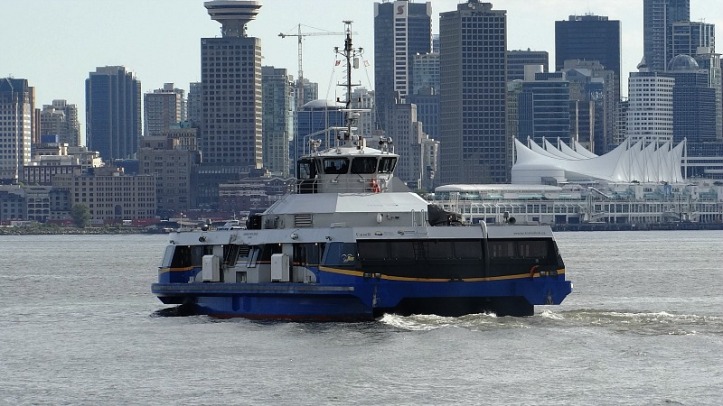 The public transport involved the Skytrain, the Seabus across the harbour and a normal bus.  It took just over an hour.  It was such a picturesque place and really our first glimpses of the beauty of British Columbia.  The suspension bridge is more or less the first thing you come across when entering the park and there were a few people waiting to cross but by no means rammed.  Once we had crossed the canyon we headed down the canyon on a quiet trail and boardwalk towards Twin Falls Bridge so we could do a circular route.  In these summer months the water runs at quite a low level down the canyon but it still tempts the cliff jumpers to try and leap from the side of the canyon into the occasional deep deep pools. There was notice after notice deterring this type of thing and some sobering memorial plaques to people who had lost their lives misjudging the depth, hitting the canyon walls or being carried away under by the lethal currents.  The most recent being in March this year. The plaque that intrigued me most on this occasion was one to a lady called Jacquie who died accidentally whilst sunbathing back in the 80s. Something to research later.

It was only about a 40 minute walk, with lots of stops to admire the views when we ended up back at the cafeteria. We had arrived sans picnic so we indulged in a panini before hitting the trails again. 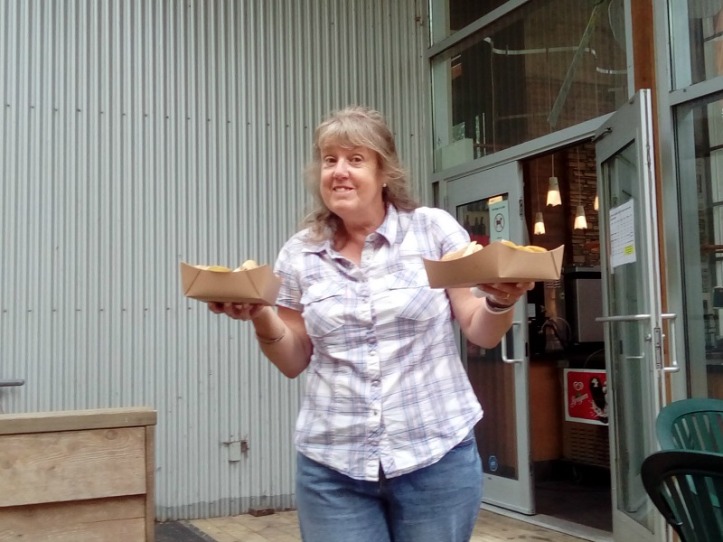 Suitably refreshed we headed out for lap 2.  This time we crossed the suspension bridge and headed up the canyon to the 30ft pools where lots of children and adults where having a great time scrambling on the rocks, swimming and even leaping into the 30 ft pool.  The water, being the snow melt, was around 10 degrees so there were quite a few yelps and screams! We headed further up the canyon and saw hardly anyone.  Our only company were the fir trees towering above us. We hope you can get a flavour of the walk from these photos. 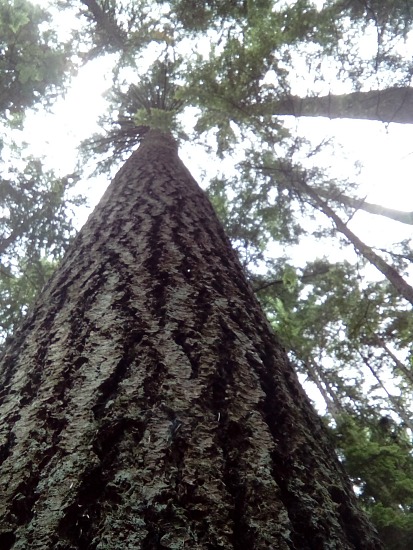 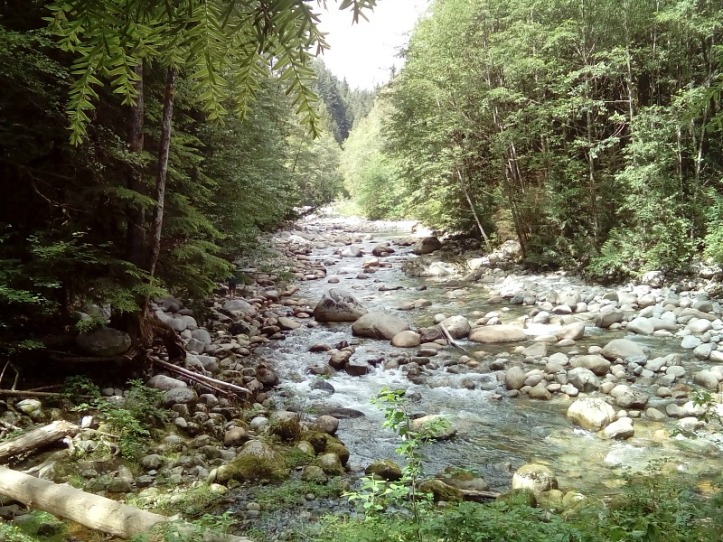 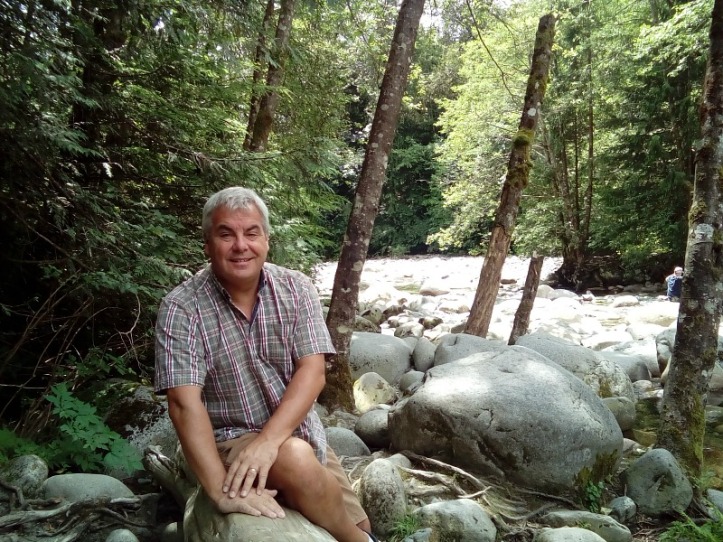 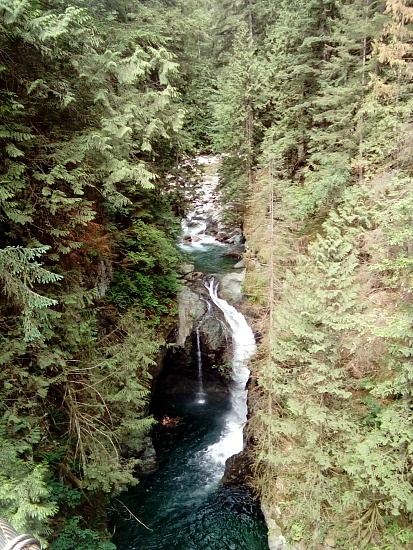 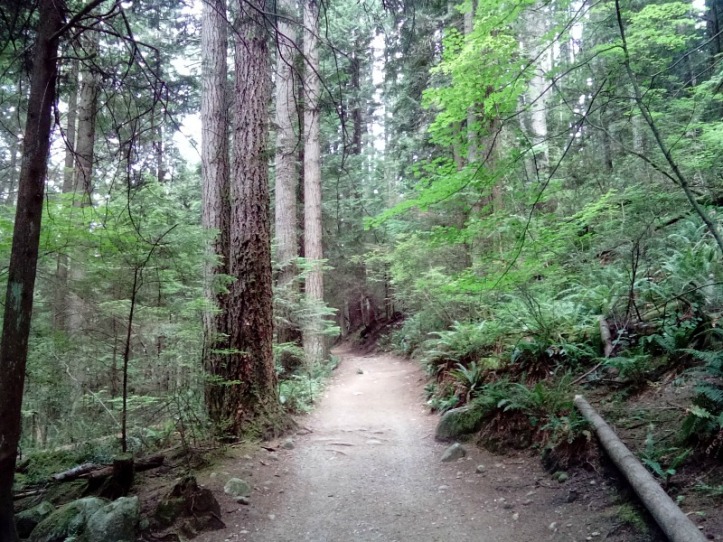 After crossing the Pipeline Bridge, we headed back down the canyon via the Baden Powell Trail which was less well kept but more interesting in some ways. What a brilliant day and still a Seabus back across the harbour to look forward to!

We have been so lucky throughout our travels with the weather but we have had a fair dose of rain here.  On one particularly rainy morning we decided to head for the local park/nature area.  It lies in a valley so after a 15 minute gentle downward street walk we headed down the 312 steps to the park.  The rain kept up most of the way and made the boardwalk around the park slippery.  We did wonder if we would meet the cougar that appeared in lots of notices.  Other local wildlife includes bears, coyotes and beavers but it is very rare to see these.  We hoped it was also rare to see the cougar! 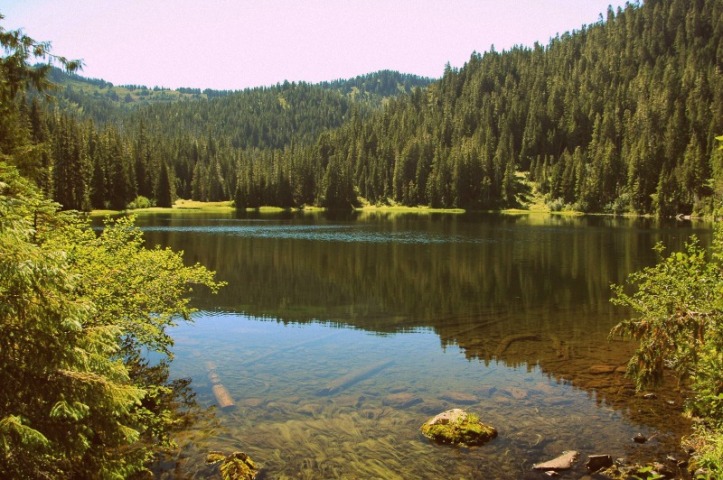 We followed a trail around to the area that is used as an outside concert area.  There is a free concert by the Vancouver Symphony Orchestra in a few days time so hope we can get back to see this under sunnier skies.

We love a Museum, as you know. So headed out of the park to the bordering village museum.  Our aim, initially, was to find a hot drink and we were not disappointed.  There was a welcoming cafe with outside seats with comfy cushions under cover.  One hot chocolate later we were content to sit a while and watch the hoards of visiting summer camp kids taking about 5 minutes to see the whole site.  The hoards were being supervised (we use that term loosely) by teenagers who didn’t seem to have much control of the children.  A bit worrying really.  If the parents could see the set up I don’t think they would sign up their children so readily. 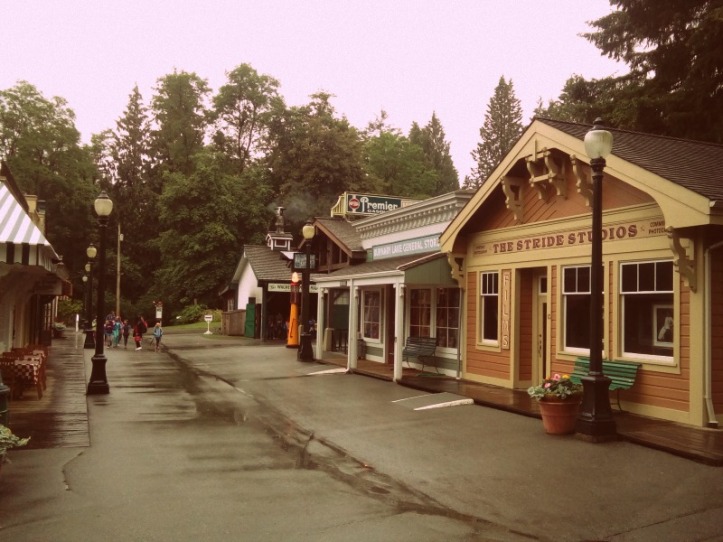 Time to look around all the preserved buildings.  The Museum had done a great job of relocating historic buildings, shops, school houses and even a farm to the site.  They were all decked out with either original or authentic items from the era.  Each building had a volunteer inside dressed in costume explaining a bit about the building and how things worked in those days.  The school teacher was very strict – she even told Jon off for not letting me through the door first. We were with picnic today so dodged the showers and headed for the bandstand to eat. 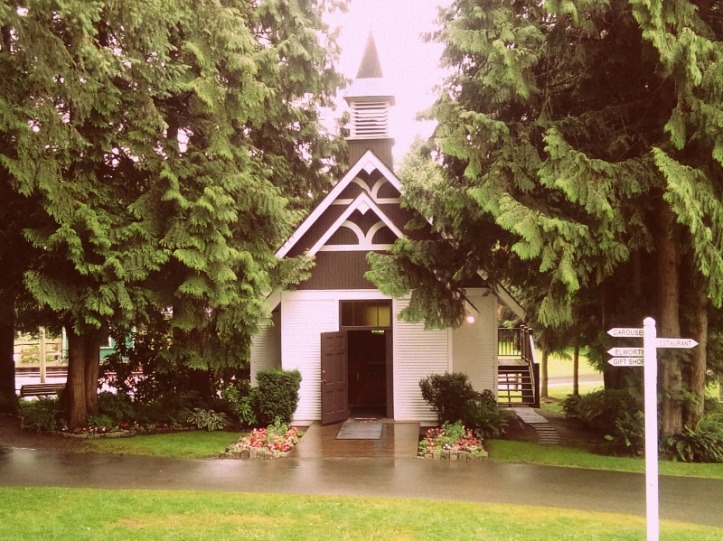 A quick look at the map to plan a look at the last few places:- the barber shop, the post office/print shop, blacksmiths and general store. We headed towards the exit in drier weather and the renovated Carousel in a specially constructed building.  It dated from 1912 and was originally part of a travelling amusement park.  Each horse had been sponsored by a local business or family, named and carefully restored. It was really impressive, especially with the renovated wurlitzer bashing out a tune along side it.  You can’t help but smile as you watch the riders flash by again and again. 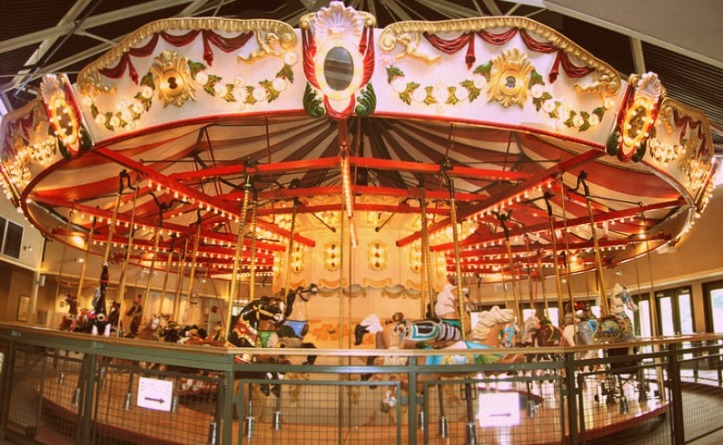 The little corner cafe had been recommended to us.  So after negotiating the 312 steps up we felt we needed a hit.  It was good coffee and only a few steps from our second Burnaby Airbnb.  I didn’t really explain earlier that following the Vancouver Dilemma, due to limited availability, we had to make two bookings in Burnaby. No dilemma here.  We have another ensuite room in an apartment block. We haven’t met any Russians, Iranians or other nationalities yet although the 2 year old son of our Canadian host only speaks Hungarian.  We may frequent Cafe 106 again in our short stay, although I doubt any amount of coffee will help me speak Hungarian.

My final note must be about Jacquie.  You may remember she was the young lady who died accidentally at the Lynn Valley Park whilst sunbathing.  It is tragic.  She was laying asleep sunbathing by one of the pools when a huge chunk of the canyon wall split away, fell and crushed her before it rolled on into the bottom of the canyon. Her friend laying beside her was unhurt and said afterwards that the boulder rolled over her friend but hardly made a mark on her body. Jacquie died more or less instantly of internal injuries.  Sad, especially when you compare this to all the risk takers throwing themselves off the side of the canyon into unknown waters.

My very irritating motto of things happening for a reason has been proved right yet again.  If we hadn’t had the Vancouver Dilemma, we would not have met Sedi and her host of international tenants, walked through cougar territory, burnt off so many calories on those 312 steps, found Cafe 106 or have this list as long as my arm of where we want to go whilst in the area. 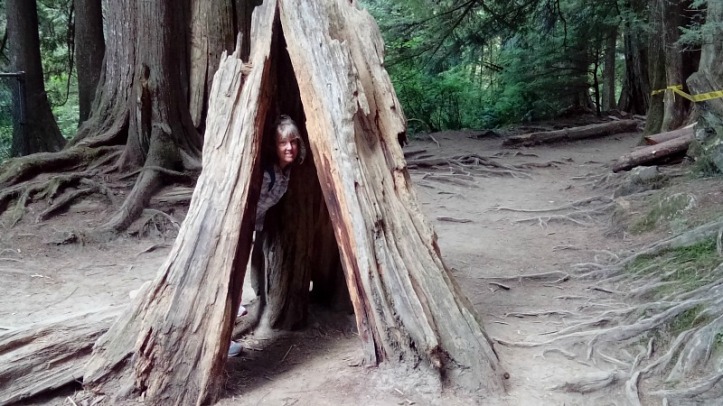 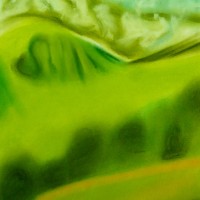 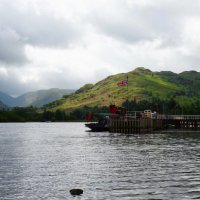 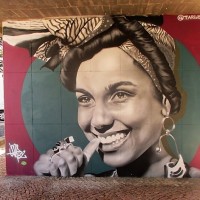 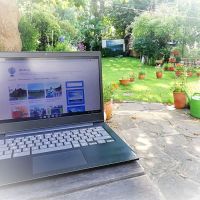 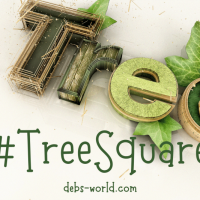 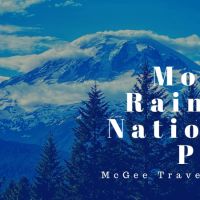 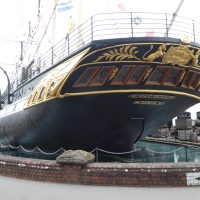