Every place that we visit has a different effect on us. Some we fall for immediately, others we grow to like, and certain ones sneak up and ensnare us when we are least expecting it. Vancouver craftily sneaked up on us.

It’s a city based on maritime industry with docks surrounding the harbour and a lot of container ships constantly arriving and departing. Although the scenery is incredibly beautiful the actual city doesn’t really have an iconic look or feel to it and we found ourselves oddly ambivalent to its charms over the first few days. However, without realising quite what was happening we have both ended up seriously loving the place.

Neither of us are massive shopping lovers but we decided to have another trawl through the souvenir shops next to Waterfront station. We’ve never seen so many different designs of t-shirts and sweatshirts, hundreds of them, and I eventually weakened and bought myself a 100% touristy bright red Canada sweatshirt. Its far too hot to wear but I guess I’ll need it over the coming months so you may catch a glimpse of it later.

Stanley Park and the Lost Lagoon

Right on the Northern edge of the city is Stanley Park. It’s pretty much an island as it’s surrounded by Vancouver Harbour and the English Bay and is virtually covered in thick forest. There are cycle tracks and walking paths criss-crossing the park and we headed west to get to Second Beach. Loads of tourists hire bikes to cycle out to Stanley Park but they mostly seem to get to the edge of it then turn back. We thought about hiring a couple of bikes but decided on some more JWalking as we felt we would see more.

As Jo mentioned last time we’re in our second Airbnb in Burnaby, a suburb of Vancouver, staying with Sophia and her Hungarian-speaking son Frankie. Thought you might like a couple of photos of our 3rd floor apartment.

One of our favourite things about our new life is staying in completely different homes with new interesting people. This one was perfect for getting into the city as the Skytrain was less than 5 minutes away and 10 minutes the other way is the supermarket. Perfect.

Symphony under the Stars

We’d visited Deer Lake Park already and as usual Jo went a bit leaflet-crazy whilst we were there. She just can’t resist a rack of leaflets and we often end up carrying around hundreds of them. Not such a bad obsession though as we wouldn’t have known about so many places without her stash of brochures. Anyway, one of the leaflets mentioned a big classical concert in the park which we decided we just couldn’t miss as it was free. 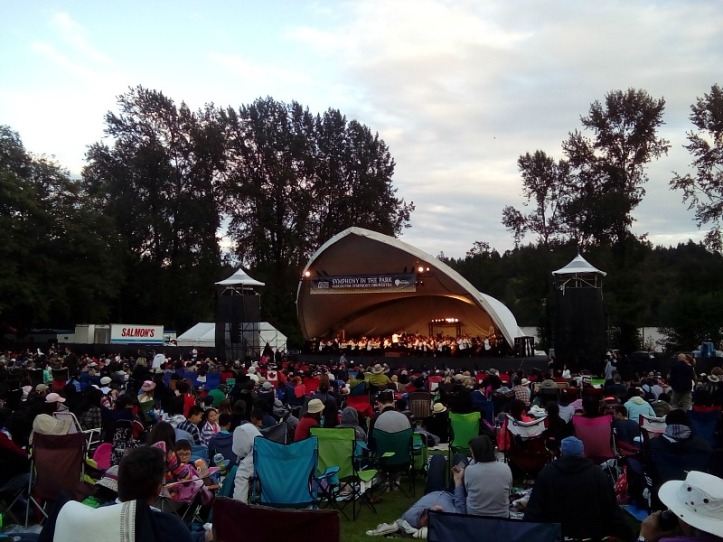 Obviously we were there early and got a reasonable spot not far from the stage but by the time the show began there were close to 10,000 people on camping chairs and picnic blankets filling every inch of the field. We of course had an old towel and some carrier bags to sit on in perfect traveller style.

The Vancouver Symphony Orchestra were absolutely incredible and played a selection of traditional classical music interspersed with a few modern arrangements. Starting with the national anthem ‘O Canada’ (where the crowd rose as one and sang their hearts out) they performed an American in Paris, the crowd-pleasing Radetzky March, orchestral scores of Star Wars Force Awakens and Star Trek, and finished with the 1812 Overture which blew us away. An amazing evening. Plus a 40 minute walk back through Deer Lake Park in the half light to finish the day. 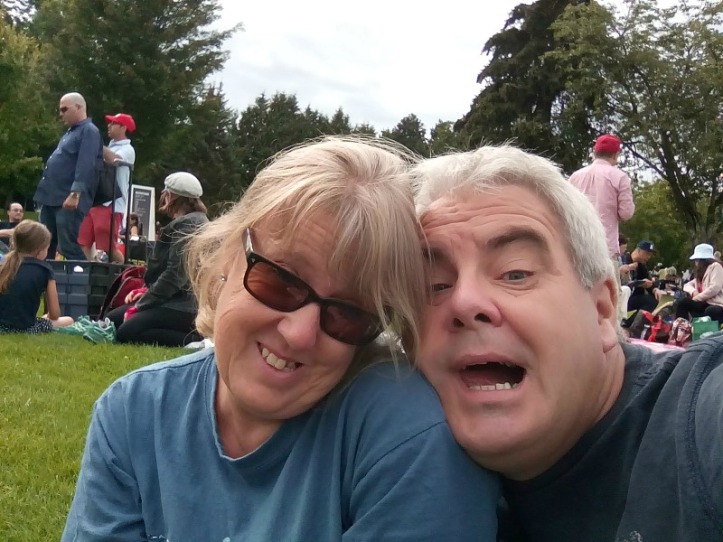 What made the concert even better was some premier people watching. I particularly enjoyed the chinese lady who got completely lost every time she returned from the toilet, the rather rotund teenage boy who tried to sleep all the way through but just couldn’t get comfortable, the two ladies who sat right in front of us but then suddenly left when I put my bare feet on their nice blanket, the lady who couldn’t wash her hands as the action of pumping her foot and rubbing her hands together was too difficult, the three Koreans who laid on their backs on their phones for the entire performance, and the 30 or 40 idiots that left right after Star Wars and before the 1812.

Our walk to the 2nd beach convinced us that we just had to walk the whole of Stanley Park so on Monday we went for it. We’d noticed that the bike track around the perimeter of the park was one-way anti-clockwise so we decided to walk the opposite way! A fairly good start as we began our trek of 10 miles around the park and back to the city centre.

We had managed to beat the masses of tourist cyclists and enjoyed a quiet relaxing few hours walking along the shore edge. Up past the famous Siwash Rock and underneath the Lions Gate Bridge, a sort of green version of the Golden Gate.

Not the sunniest day but overcast is so much better when you’re walking. The weather here in Vancouver is our favourite of the North American trip so far as there is always a breeze and the air is just so clear and fresh. It really feels like a healthy climate.

As well as the scenery we thoroughly enjoyed watching all the really bad cyclists who obviously thought a bike ride would be fun but either haven’t cycled for years or are just rubbish at it. So many near misses and raised voices. Brilliant.

We even avoided taking a selfie as a friendly Canadian lady got chatting and offered to snap us on the edge of the harbour. Still not entirely sure if they all get our sense of humour here as a few little comments and jokes have fallen as flat as a pancake. We won’t give up though.

Lunch at the fantastically named Lumbermans Arch and on to the 9 o’clock Gun, a cannon that is fired every day at …. you guessed it, 9 o’clock. Down to Hallelujah Point and the iconic Totem Poles built by the indigenous Squamish tribe and past Deadmans Island. Plus a few memorials en route to Queen Victoria, Lord Stanley, and Robert Burns. So many plaques and so little time! Jo was all over the place.

The final stretch took us back into the harbour and along to Canada Place. Just over ten miles and we were feeling it as we sat in the sunshine and watched the cruise liners set off on their Alaskan voyages. One of the massive liners was the Disney ship Wonder. Full of overexcited kids and constantly playing ‘When You Wish Upon a Star’ it looked a little intense. I’m sure they’ll have an amazing trip but it looked kind of frantic to us.

The harbour is north of the city but along its southern edge is an inlet called False Creek. Apparently named by the surveyor George Richards in 1856 as it didn’t actually go anywhere, it was a dead end. We had the real walking bug after the previous couple of days and thought we’d walk from Science World at the eastern end right along to Kitsilano Beach.

Past the Olympic Village from the 2010 Winter Olympics and along to Granville Island. Jo just couldn’t help herself repeating her unbelievably bad impression of Arkwright from Open All Hours, over and over and over.

G G G Granville Island is full of indoor markets and cool little cafes, alongside countless arts and crafts shops, street entertainers, galleries, and the most amazing childrens playgrounds. As we stuffed our packed lunch we were entertained by the annoying ‘Byron from England’ with his ‘Come on Everybody’ and ‘I’m Byron, from England’ catchphrases (hopeless). But also by another guy who balanced on a skateboard on top of a suitcase on top of an upturned scaffold pole on top of another luggage case. Crazy. And he was juggling with knives! I love a juggler. He was good.

Another fabulous walk continued along to Kits Point and Kitsilano Beach. 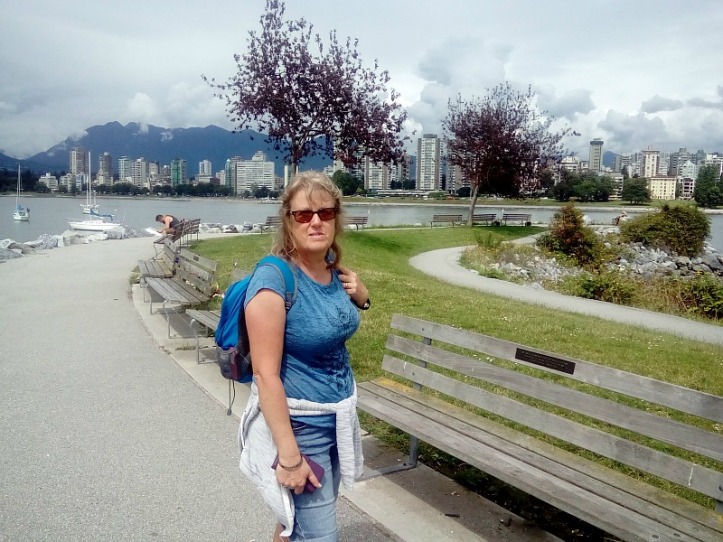 The final leg took us back via the Vancouver Space Museum (would have loved to go in but just didn’t have time) and then across the impressive Burrard Bridge into Yaletown. After another 10 mile walk we felt we deserved to celebrate so got ourselves a table at the Steamworks Brewery and splashed out on a meal and a couple of beers. Then I lost my head completely and ordered a Jamaican Yellowbird Fishbowl. It was all Jo’s fault really as she told me that it included peach schnapps, banana liqueur, pineapple juice and seven-up. Excellent. Oh and rum. 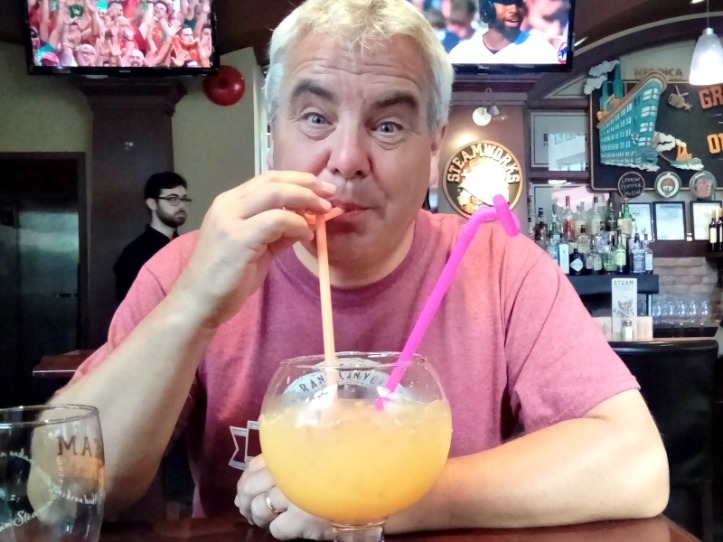 Perfect end to a perfect day.