How the Giant’s Causeway won us over

The Antrim Coast has been a revelation, in fact we are probably enjoying it more than our Wild Atlantic road trip of southern Ireland. Perhaps it’s the fact that the road is right on the coast or maybe that the roads are slightly quieter but we are certainly taken with it a lot more.

The two big tourist attractions in this part of the world are the Giants Causeway and the Carrick-a-Rede rope bridge and even though there are a stream of coaches racing to each location we really didn’t want to miss out. So the plan was an earlyish visit to the Giants Causeway to find out what all the fuss was about and if it was really worth going and a late one to the rope bridge to try and avoid the rush.

Game of Thrones at Ballintoy Harbour

On the way to the causeway we diverted down to the glorious village of Ballintoy and made our way to the even better harbour. The early morning mist rolling across the harbour rocks created an eerie look and feel as we strolled out to the end of the picturesque little dock. Signs explaining how it had featured in Game of Thrones figured prominently but were a bit lost on us as we’ve never ever seen a single minute. Apparently it was used as the village of Lordsport in the second series. Mean anything to you? 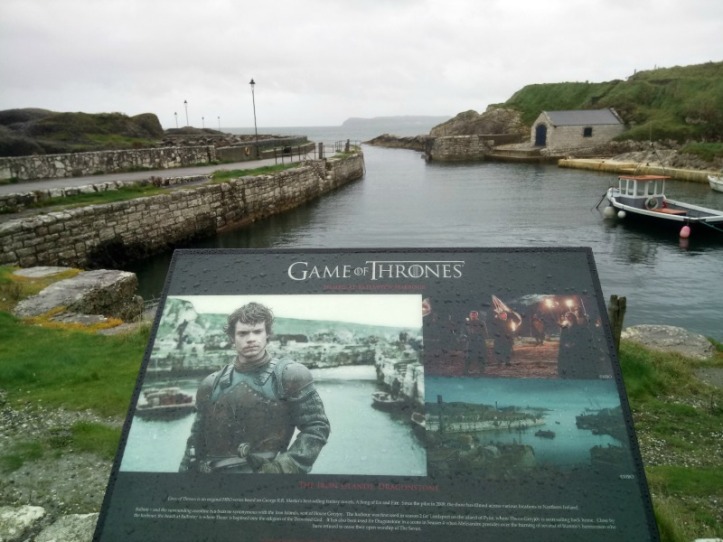 Fisherman loaded their ancient fishing boat and pushed off in front of us as we climbed above the harbour to look down on the Lime Kiln and the O’Rourke cottages as the sun started to push through the clouds just in time for our visit to the causeway.

Everyone has heard of the Giant’s Causeway haven’t they? It’s one of those must-go-to tourist places that regularly features highly on the ‘Top Twenty Places to visit’ lists that you find on Lonely Planet and Trip Advisor. If you don’t know about it then it’s a World Heritage site that features over 40,000 interlocking hexagonal stone columns leading down into the sea. It’s expensive to park and get in the visitors centre but was it worth it?

We decided to walk out along the cliff top on the Red Trail and then down the steep cliff steps and approach the Causeway from the other side to the visitor centre. Walking down towards it we were both surprised at just how small it actually looked. We really imagined an enormous rock formation thrusting out into the water that would stop us in our tracks and take our breath away but unfortunately not. Climbing the 12 foot side onto the top of the columns we walked out to the furthest point wondering what all the fuss was about?

There are actually three rocky outcrops that make up the Giant’s Causeway with the Grand Causeway being the biggest one that stretches furthest into the sea with two smaller outcrops right next to it. One of these features the Wishing Chair which is a natural throne amongst the rocks that until recently was only supposed to be sat in by ladies. We couldn’t find it but did hear a rather loud-mouthed American girl lecturing anyone that would listen. 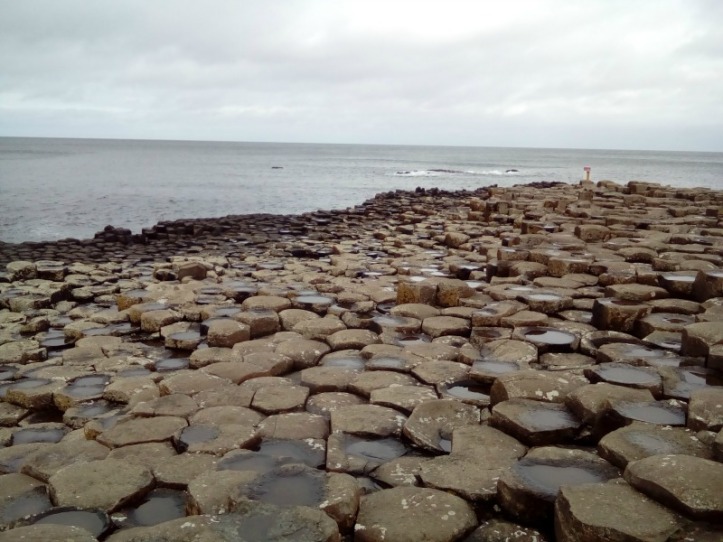 The Legend of the Giant’s Causeway

Apparently, and this is undoubtedly true, the Irish giant Finn MacCool (Fionn mac Cumhaill) was challenged to a fight by the Scottish giant Benandonner. Finn accepted the challenge and built a causeway from Ireland across the Irish Sea North Channel to Scotland so that they could meet. A couple of versions of the story have either Finn winning the fight or hiding from Benandonner disguised as a baby. When the Scot sees the baby he assumes that the father must be huge and fleas back across the causeway destroying it as he goes. Identical columns in Scotland obviously supported this story.

After much climbing and wandering around the three outcrops we found ourselves becoming more and more impressed and fascinated by this incredible natural wonder. The hexagonal stacks defy all logic and just go on and on. By the time we started our walk up the hill we had been won over completely.

A slight issue for many visitors could be the number of people clambering all over the rocks. A French school party completely over-ran whichever area they were climbing across and the hoards of selfie-takers tested our patience on several occasions. And this was early on a quiet day, goodness knows what its like in the summer. But it is definitely one of those unique, special places you just have to visit.

Travelling west from the madness of the Giant’s Causeway we stopped in the delightful town of Portrush for a walk on the beach, some lunch, and a longer wander around the point to see Curran Strand. It’s a fabulous little town that is a serious summer resort for a lot of Irish families in the summer but the big news is that it’s been chosen to host the Open Golf Championships in 2019. Not a golf fan? Neither are we but this a huge deal with a lot of building work already underway and investment everywhere. It will transform the town and be amazing. May be the first Open we watch on TV (maybe). 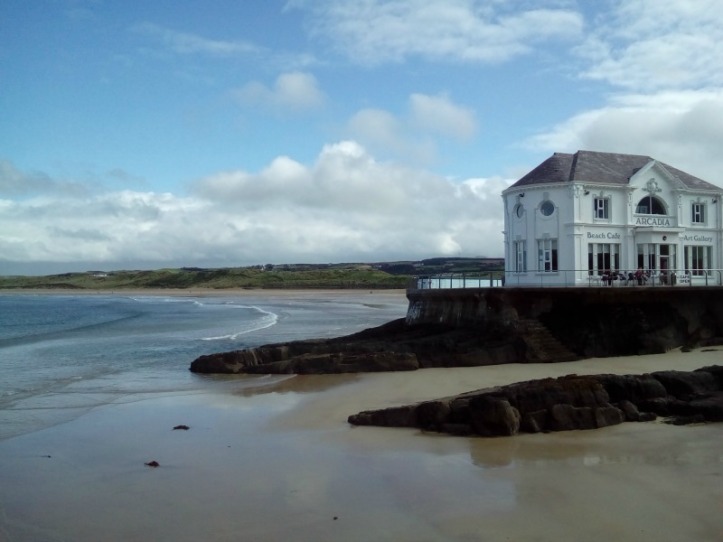 Portrush was as far west as we were going so we headed back east towards Carrick-a-Rede and the famous rope bridge. On the way though there were castles at every turn. So stops at Dunluce Castle and Dunverick Castle were a must. So much history but so little time and it was all I could do to drag Jo away from the countless plaques and information boards!

A quick visit was actually recommended by our housesitting hosts back in Banbridge and that was to go and see the famous Dark Hedges in Country Antrim near Armoy. Apparently it was an amazing avenue of dark and foreboding trees that’s been used in many films and tv series including Game of Thrones. So a minor diversion, parking at the Dark Hedges Hotel, and there we were walking into the midst of the incredible Dark Hedges.

Actually, that’s not quite true. It wasn’t incredible and it wasn’t amazing, it was rubbish. The Dark Hedges are up there with Times Square and The Statue of Liberty as the most disappointing places we have ever, ever visited. Lines of cars parked at the side of the narrow road, coach after coach crawling past those cars, groups of tourists wondering what on earth brought them here! Absolutely terrible.

We did actually make a real effort to get into it by walking the entire length of the road and back but both felt utterly deflated and a little cheesed off that we’d wasted an hour of our lives going there. Don’t go. Game of Thrones has got a lot to answer for.

Our other real touristy destination today was a bit of a challenge. Carrick-a-Rede is actually an island that local fisherman have used for 350 years and which is connected to the mainland by a narrow rope bridge. One hundred feet above the sea and rocks and 70 feet long it is now a National Trust site and attracts a quarter of a million visitors every year. So we thought late in the day would be better to avoid the coaches and hoards and we were right.

The queue was only 4 people long compared to the usual 400 so we walked the half mile steep path down to the rope bridge. Now you all probably know that Jo is not great with heights, she was amazing in Chicago going up the Willis Tower, but she was determined to do the rope bridge. The bad news on arriving was that the bridge had been closed all morning due to high winds but that wasn’t going to stop us. Only two people in front as she stepped out onto the narrow bridge with the sea crashing 100 feet below and the wind gusting heavily.

One slightly worrying thing about this bridge is that there is only one way over so you have to come back the same way. If you don’t like it, tough. Just as we were due back over the NT staff stepped out into the middle of it and started to do a wind speed test! Apparently it was getting dangerously strong. We really needed that didn’t we? Crossing back over was even better though as we had the whole bridge to ourselves and Jo was the bravest of the brave and even posed halfway over.

The Carrick-a-Rede Rope Bridge is really worth a visit so if you’re in the area make sure you don’t miss it but we would advise that you get there very early or very late to avoid the crowds and the coaches. What a day! 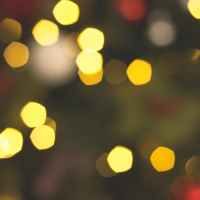 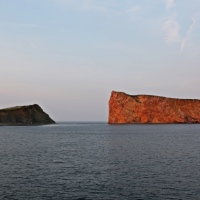