Hari Kirihimete from Kimi Ora. If you need a translation it means Happy Christmas from the Kimi Ora Eco Resort in Kaiteriteri. We are a bit behind with the posts but there is nothing wrong with a belated greeting is there?

Where to spend Christmas Day?

We had decided way back when planning this trip that we needed to be occupied Christmas Day so that homesickness at this special time of year didn’t get the better of us. We also wanted the day to be memorable. So after a fair bit of research 6 months ago, we settled on the Kimi Ora Eco Resort.

It is tucked away in the bush behind Kaiteriteri beach with stunning views. There are only about 20 little studios which are a little like Center Parcs lodges only a bit posher. We had a little studio apartment with a balcony overlooking the bay was a perfect place to relax and give ourselves a bit of a travelling treat. We had two nights booked and arrived on Christmas Eve. 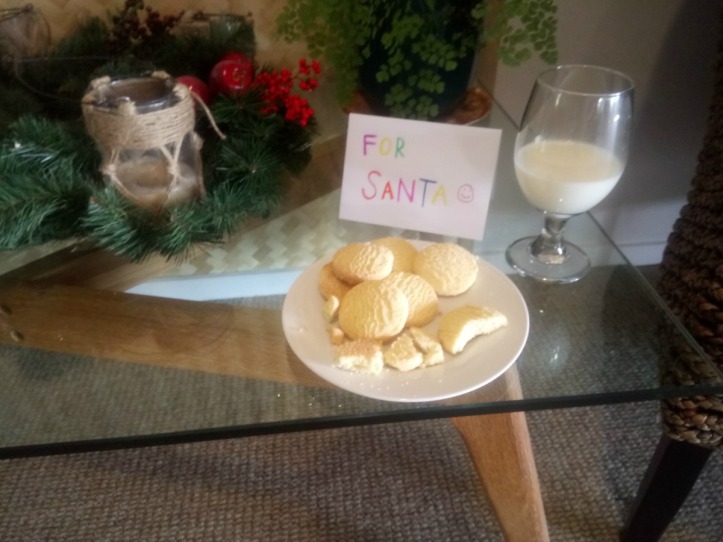 We had breakfast included so after tucking into all sorts of yummy, healthy breakfast treats, we had to start making decisions. Sauna, steam room, outside pool, inside pool, hot tub, spa treatment, bush walk, library, table tennis, pool and so the list goes on.

It must be the true British nature in us that kept drawing us to the beach. We didn’t feel we could settle until we had got down to the beach and had a Christmas swim. It was as if we had to do it because we could. We grabbed the togs, hats and tinsel in about 10 seconds flat and headed for the sea. It was only about 9.30am!

Lots of silly nonsense and photos on the beach followed by a swim in the crystal clear water. As we left families were arriving for a traditional Christmas picnic on the beach – not a brussel sprout in sight! 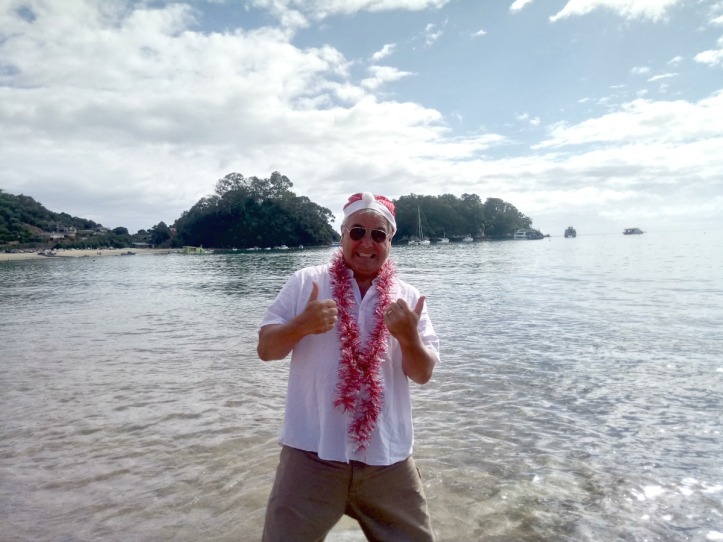 Within an hour we were back at our “resort” and as we were wet already it seemed silly not to go straight to the pool for a dip and lounge around. We were certainly making the most of our surroundings.

A Feast Fit for a King

All these water activities gave us a Christmas appetite. The restaurant was due to be open in the evening but we had looked at the menu and, despite Jon’s recent efforts to eat more green, the vegetarian menu did not suit his Christmas palate. There is only one small general store with a very limited selection of food in Kaiteriteri which was open for a couple of hours on Christmas Day. Am I beginning to get you worried? Never fear, the Christmas elf had planned ahead and we had a feast of chicken wrapped in pancetta and stuffed with garlic and herb philli, broccoli, carrots, sauteed potatoes and gravy.  If I do say so myself, not bad without an oven or microwave and just a two ring hob. There was even pate, cheese, breads, crackers and snacks for supper all to be eaten on our balcony overlooking the Tasman Sea. How elficient!

A few glasses of wine and a few games then it was time to get on the phone. To overcome the 13 hour time difference, calls to the family were on a rota system that evening so that we could wish each of them a happy Christmas on their Christmas Day morning. It was great to speak to them all but it did make us want to be a part of their day, although after seeing our tinsel and hats I don’t think the feeling was reciprocated.

Kimi Ora Eco Resort was such a great find and hit all the buttons for us at the time of year when it is particularly hard for us to be away. The day finished by watching the sunset in the bay and a short walk through the dark bush to see the glow worms. They were like little LED lights twinkling especially bright for this special day.

Next – The Great Kiwi Coastal Highway