Everyone goes on and on about the Great Ocean Road in Australia but the Great Kiwi Coastal Highway on the west coast of the South Island of New Zealand beats it hands down. No competition at all in our opinion. The next part of our JWalking 3 adventure would take us from Kaiteriteri in the Abel Tasman National Park all the way down to the coastal town of Hokitika on the wild west coast.

Boxing Day morning saw us waking up in the marvellous Kimi Ora Resort in Kaiteriteri where we’d spent an incredibly lovely Christmas Day. A final posh breakfast in the restaurant overlooking the beach and it was time to get going. We had a 160 mile cross country drive to the little town of Charleston which we reckoned on doing in 3 to 4 hours depending on traffic. So many people had told us that the roads would get super-busy after Christmas as it was NZ summer holidays and everyone would be hot-footing it south. So we were a bit wary of queues of cars and lots of hold ups.

Pretty quiet start as we headed down into the Motueka Valley going through Ngatimoti and Stanley Brook towards Motupiko with hardly any cars around and we were worried we had gone the wrong way! We assumed that as soon as we joined the main highway 6 east-west road that the hoards of camper-vans and 4×4’s would all appear. It got slightly busier but still ok so we pushed on to Lake Rotoroa in the Nelson Lakes National Park where we’d planned a nice little picnic for lunch. 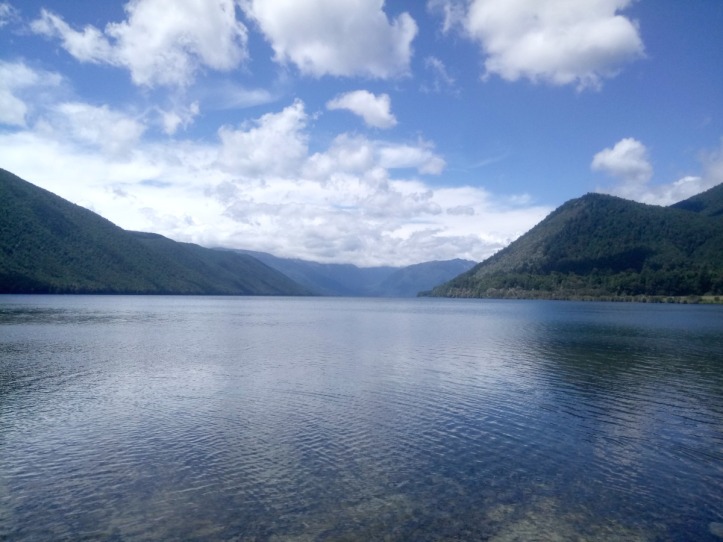 It may look nice but you can’t see the gangs of flies charging around causing havoc can you? A quick wander and we jettisoned the lunch idea and got back on the road. Really not worth the hassle.

Continuing west through the fabulously green Buller Gorge towards Murchison we rescheduled our lunch appointment for a quiet little picnic site in the Buller Valley. No flies and much better. After a quick stop at the Lyell historic site we soon made the coast just south of Westport (where we stayed on our first trip in torrential rain).

Just before Charleston we took a brief diversion to the wonderfully named Cape Foulwind, west of Westport on Buller Bay. Jo loves Cape Foulwind because it gives her so many opportunities to take the mickey. I’m not saying anything at all.

Anyway, it’s called Cape Foulwind because Captain Cook didn’t like it a great deal, perhaps it’s the seal colony at Tauranga Bay and the smells they make. Who knows? Funny name though. A great little stroll along the walkway and then ages watching the seals before we set off for our Airbnb stop that night in Charleston.

A very small little town, in fact it’s almost not a town at all. If it was in England we’d call it a village I think. We were staying with Kay and Chris, their one year old labrador, and their cat. We had a self-contained bedroom and bathroom that was separate from the main house but Kay had kindly invited us to dinner so after a few drinks on the deck we shared a lovely meal and an evening full of chatting and laughter. These occasions are really what travelling is all about. Meeting fabulously friendly people and sharing an evening getting to know each other. What could be better? 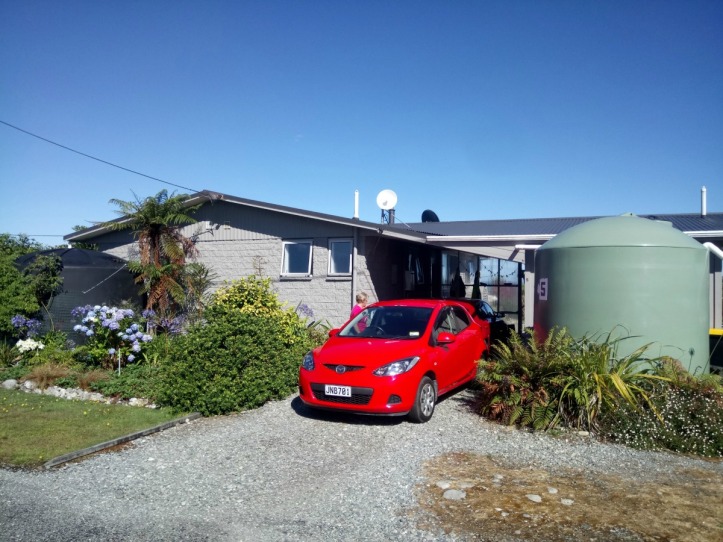 All too soon it was time to head on, we just wished that we had booked to stay another night (or two) with Kay and Chris but unfortunately we hadn’t so after sharing breakfast we said au reviour and got on our way. We didn’t actually get very far as they had suggested we pop down to Constant Bay which was almost at the end of their garden. What a wild and amazing place though. 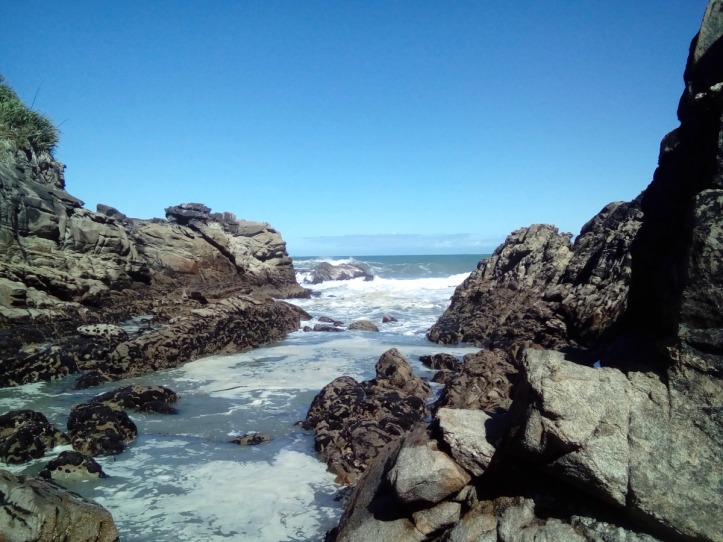 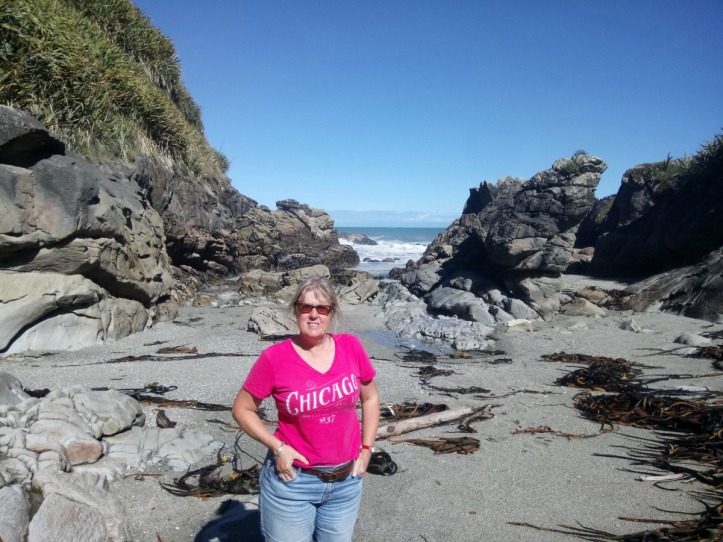 So this is where it all starts, the Kiwi Coastal Highway. Between Westport and Greymouth is one of the most beautiful sections of road that we have ever driven. It hugs the edge of the Southern Alps on one side and skirts the Tasman Sea on the other with incredible views at every turn. The road twists and turns its way down valleys and ravines, back and forth from the sea with sharp bends and one way bridges every few miles.

You need to seriously concentrate if you are driving the Kiwi Coastal Highway as there are many badly driven tourist campers and impatient locals testing you constantly. It is worth it however as the road from Westport to Greymouth is almost beautiful and makes the Aussie Great Ocean Road look extremely bland.

Essential stops at the world famous Pancake Rocks and the strangely eerie Rapahoe Hotel broke up the journey a little but all too soon we’d arrived in Greymouth and the end of the Kiwi Coastal Highway. 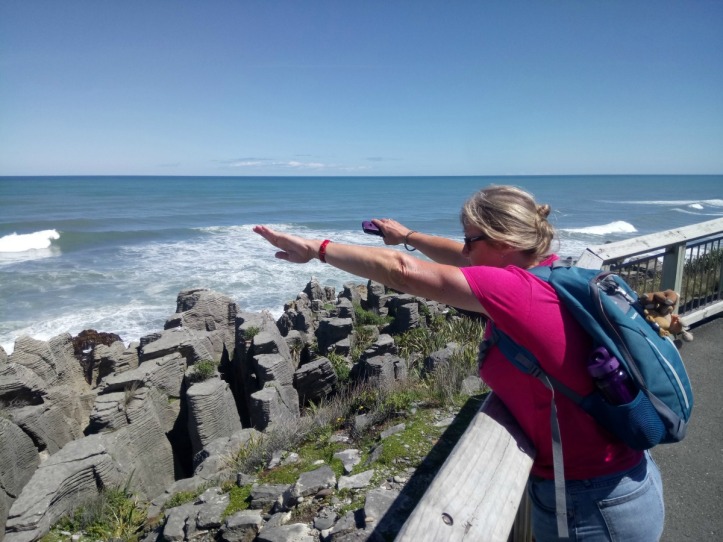 I don’t want to do the town a disservice but it isn’t the prettiest looking place and there aren’t that many interesting things to see. Greymouth is a blue-collar working town that knows it’s roots and doesn’t seem to pander too well to the tourists flooding through. We managed to find Mowhera Quay for a spot of lunch but didn’t stay too long. I’m sure the people of Greymouth are lovely but the town just isn’t.

The final few miles down the coast are not as amazing but still picturesque and we arrived back in one of our favourite Kiwi towns of Hokitika where we were staying for a couple of nights at the 252 Beachside Motel. Jo will tell you more about our stay there next time but our first evening was spent on the beach watching one of the most fabulous sunsets ever. We weren’t alone either as the whole town seemed to have turned out. Stunning.

Next – Lakes and Glaciers of the Southern Alps