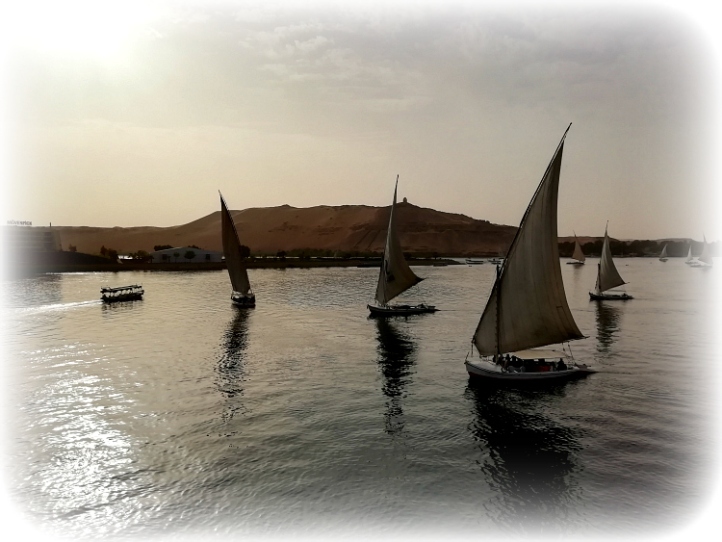 Our trip to Egypt was organised in three separate parts. The initial few days on the Red Sea in a plush hotel and the final four days at the same resort, but it was the middle section that our whole reason for going was based on. A week cruising down the River Nile and exploring some of ancient Egypts most fascinating locations.

A civilized departure time with opportunity for a final slap-up buffet and we were on the coach destined for the town of Luxor where our boat awaited. As Makadi Bay is right on the Red Sea coast it was a four hour drive across the desolate Eastern Desert. There were only twelve passengers onboard so we had plenty of room to stretch out and although many of our fellow travellers slept we couldn’t help but be absolutely fascinated by the desert landscape and the other-worldly views. 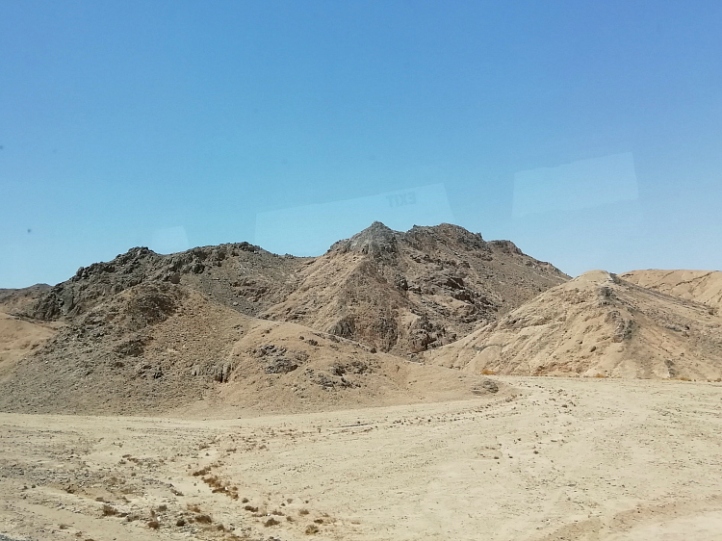 The Eastern Desert is actually part of the Sahara Desert and only named that way as it’s east of the Nile River. Apparently it is also called the Red Sea Hills and the mysterious-sounding Arabian Desert depending on which locals you speak to. Our route took us south to Safaga and then west along highway 60 to Qena and then south to Luxor. There were no towns or houses en-route to Qena but there were plenty of military checkpoints manned by teenagers dressed as soldiers with rusty rifles that would probably do them more harm if used than the enemy. It’s so strange to drive through deserted mountains and across barren valleys and then be confronted by a badly constructed checkpoint manned by ten bored, well-armed, pre-pubescent soldiers. What on earth were they guarding? 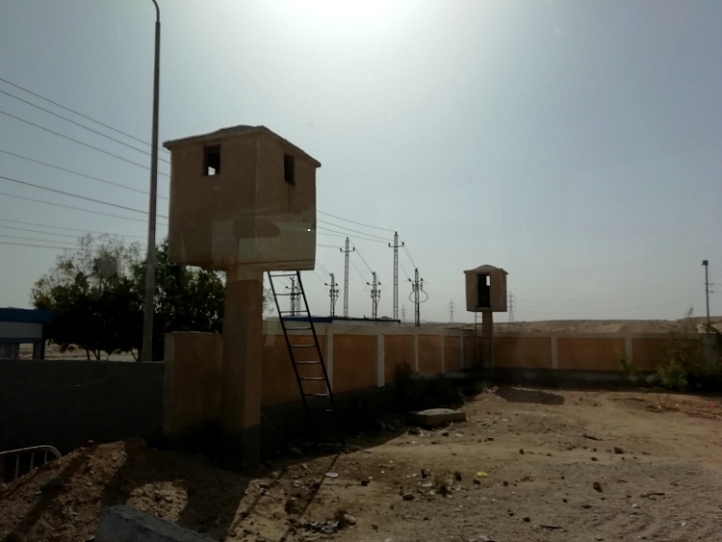 Halfway across the desert we veered off towards a mirage in the distance which turned out to be a brief comfort stop. Completely in the middle of nowhere we left the coach to a mini-market full of Egyptian shopkeepers trying to sell us everything under the sun. There were toilets and a small cafeteria but they seemed to be a distraction as the main reason for us being there was as potential customers! Did we want a rug? Or a scarf? A dress perhaps? Some authentic pottery? Surely we needed a hat? 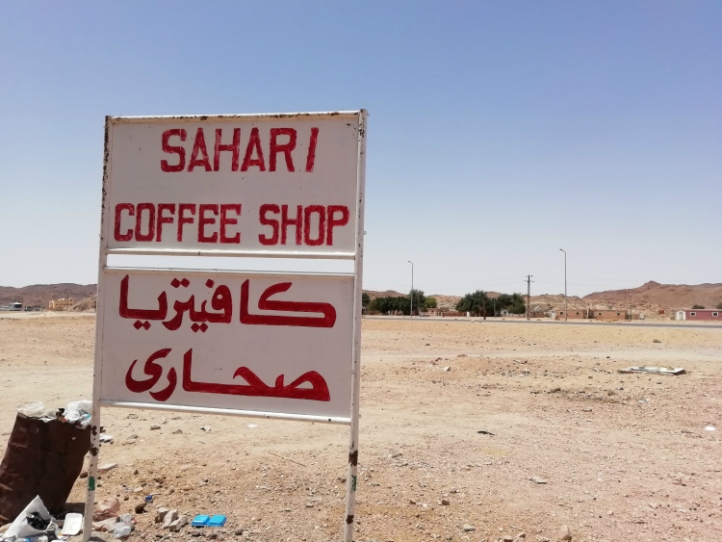 We ran the gauntlet and as advised by our holiday rep on the coach, tried to avoid eye-contact and dashed for the toilets. No problem. It was a shame though as we would have quite liked to have looked around the stalls and what they had to offer but any sign of interest was just taken as a sign of weakness and they were on you! We both stood strong but as we got back on the coach one of our party appeared to have been ambushed.

Our fellow traveller Simon had made the mistake of looking at the shirts and then engaging in conversation with the stall-holder. Rookie error! Before he knew it he had the local fella’s life story including how difficult it was for him to make ends meet and he was walking away actually wearing a new shirt! As it was early days his bartering skills were untested and he left being well and truly stitched up. Simon then proceeded to make it worse by telling everyone what happened thus becoming the butt of a whole host of jokes and mickey-taking for the entire week. I think I would have kept it quiet personally. 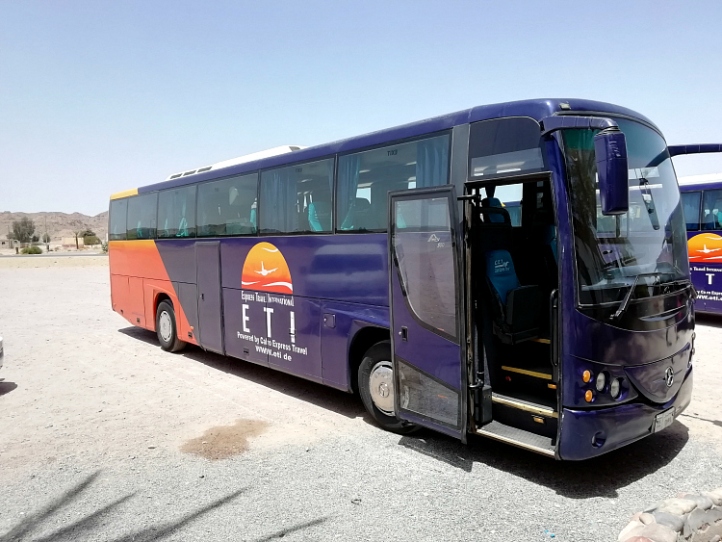 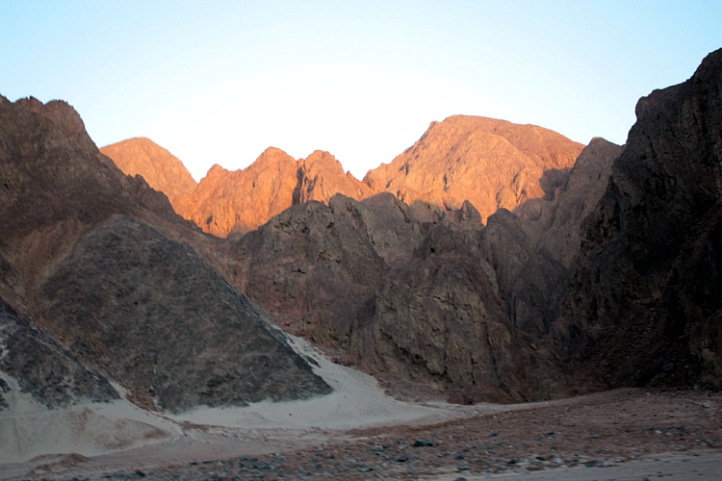 The second half of the drive started fairly similar to the first crossing yet more desert. What must it be like to actually have to cross the Sahara by foot? The Eastern Desert seemed big enough so we couldn’t begin to imagine how big the Sahara must bee. Mind-blowing. We eventually hit civilization in the old city of Qena and turned south for the last few miles to Luxor. This final section proved to be a real eye-opener as we drove down route 75(or 02 depending on what sign you believed) alongside a small river through countless small villages. 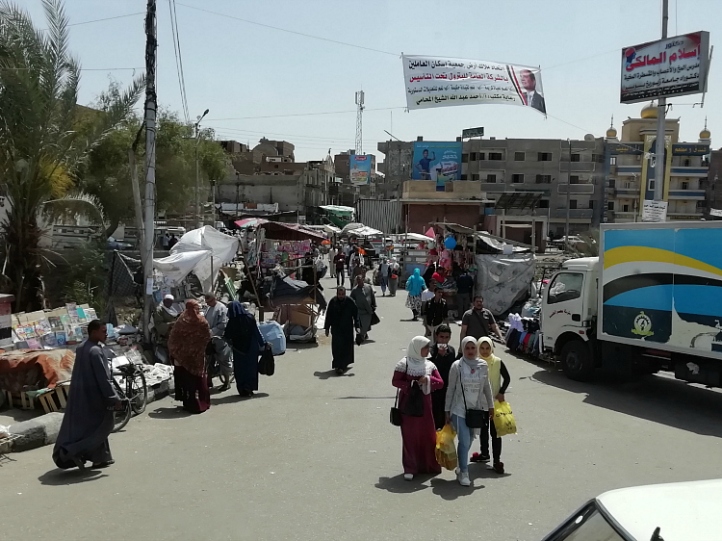 Every single bridge we passed, which must have been 50 plus, was guarded by armed soldiers or police and the number of semi-collapsed checkpoints was just astounding. So much security where the majority of the people appeared to be locals pulling donkeys or just sitting in the shade. The houses and vehicles we passed were so interesting and we finally felt that we were seeing the real Egypt. 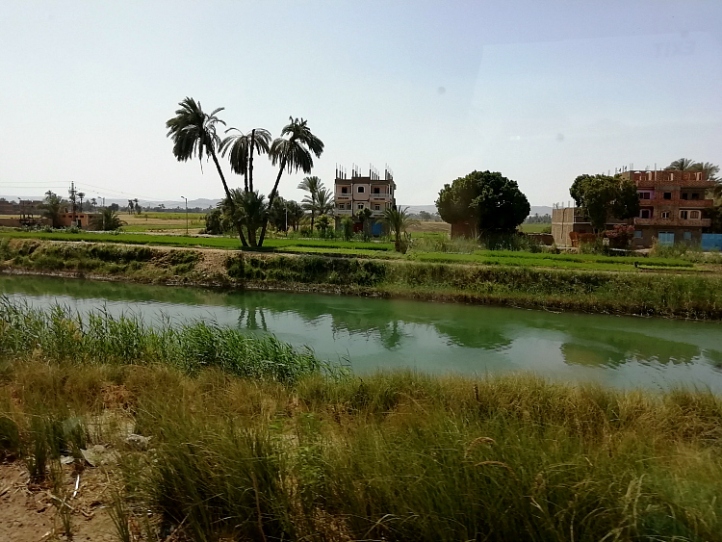 Passing through Qift, Shanhur, and Al Madamum we arrived in Luxor and got our first view of what would be our home for the next seven nights. The MS Grand Rose was a 5 deck, 60 cabin medium-sized boat that had been taking travellers down the River Nile for over 20 years. We were welcomed aboard into the very grand lobby and shown to our cabins with the minimum of fuss and left to explore before meeting the new rep after dinner.

With an onboard buffet restaurant, Lounge and Panorama bars, a sundeck, a swimming pool, and other facilities it really impressed us as we wandered from deck to deck to get our bearings. The lovely spacious cabin with a river view and big comfortable bed looked absolutely spot-on. This could be a good week. The MS Grand Rose felt like real luxury to us. 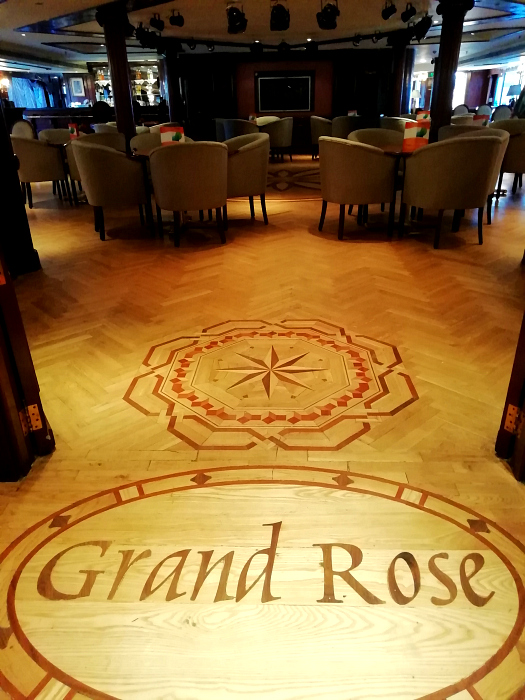 Now we have often looked at cruise brochures and watched cruise ships leaving ports all over the world and always wondered if we would like it or not. We always had the worry that being stuck onboard and on a strict timetable for shore-leave would make us feel uncomfortable plus the fact that you don’t know what sort of people you could be living alongside. Always played on our minds and made us so unsure of the whole cruise thing. So this mini-cruise down the River Nile was both a bit of a gamble and a taster of what a big ocean-going-ship might be like. 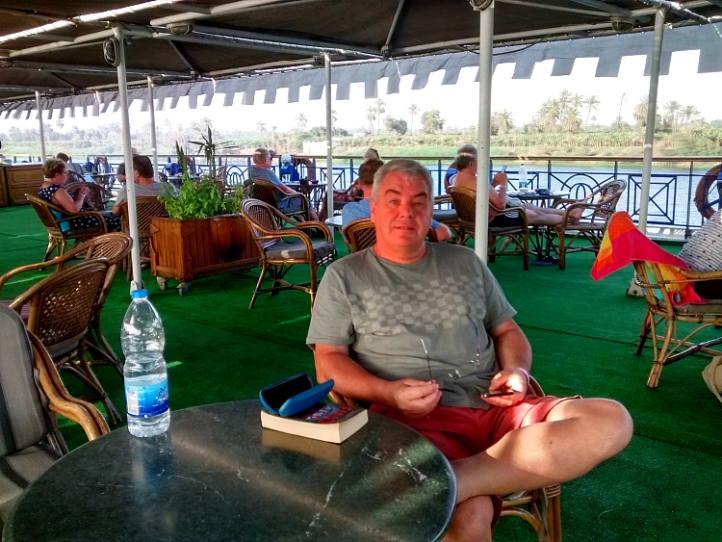 Before we get into the actual cruise it may be best to run through the other runners and riders that were our fellow passengers on this little jaunt. As I said earlier there were 12 of us that were coached from the Red Sea. A few nods and smiles plus a brief ‘this looks nice doesn’t it’ and ‘what times dinner’ broke the ice as we were all seated together for our initial dinner. We shared a small table with a couple of old-time, experienced Egypt-visitors called Ken and Elaine from Sheffield. On the next table sat Simon the shirt-buyer and his gilrfriend Natalie, Mark and Katrina from Rugby, a short stocky scouser called Trevor and his wife Sarah, and finally the smiley smiley June and her very pompous husband. Seemed like a nice crowd. More would be joining the next day. 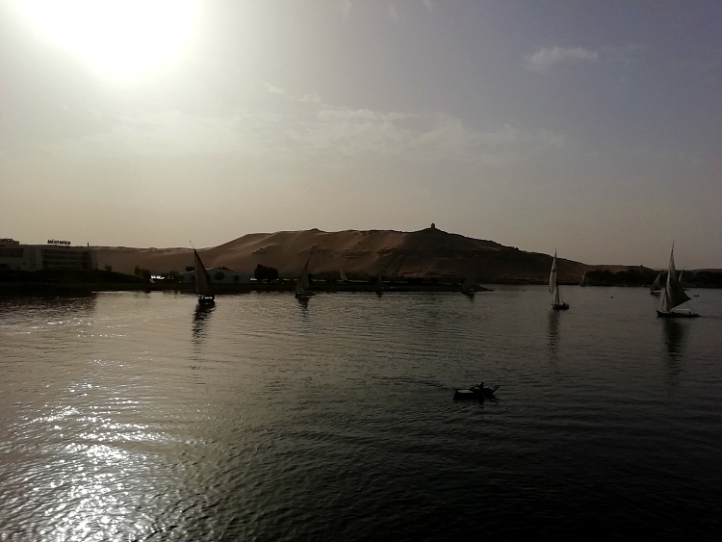 One Night in Luxor

Our first night was spent berthed in Luxor just relaxing on the boat, having a wonderful buffet dinner, and enjoying a couple of drinks on the sundeck as the sun set over the west bank of the River Nile. A busy week ahead touring temples and tombs awaited us but tonight was for us. 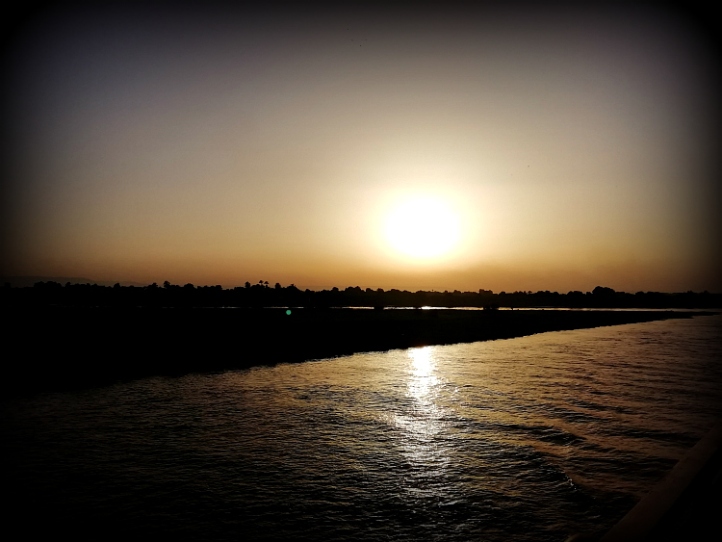 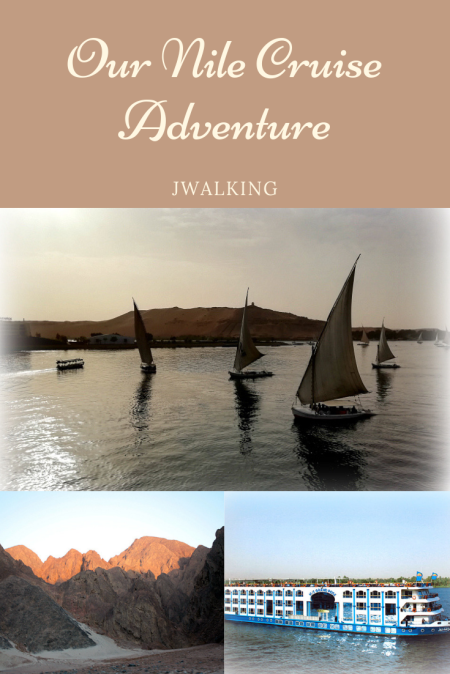