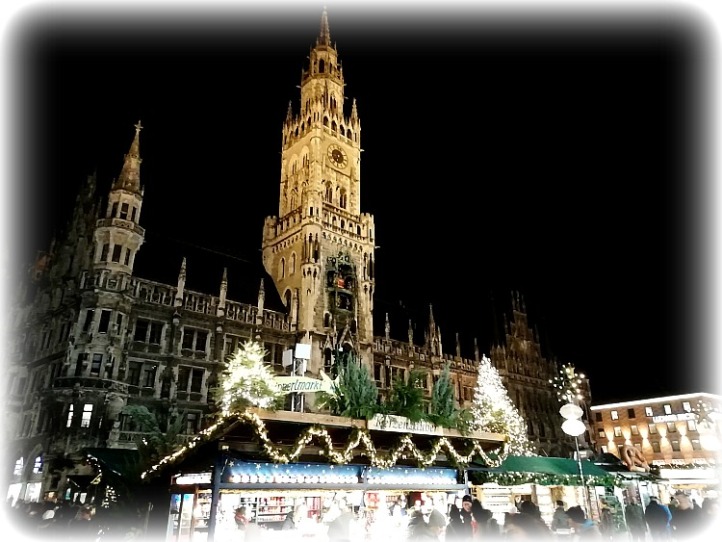 During one of the hottest days of this summer, we planned our winter visit to a Christmas market. Lots of places were researched – most of which were in Germany – a place very close to our hearts, so it was no surprise that it ended up being München. The English love to change name places so it is better know to most as Munich. Apart from being the setting for each of our son’s 21st birthday celebrations, Jonno’s 40th, our eldest son’s stag party two years ago and many a sing song at the Oktoberfest, we have enjoyed a couple of summer family holidays there. We have visited this area so many times and even lived there for 3 months back in 2015 but never been in the winter months.

Easyjet for an Easy Journey

Using the tried and tested budget airline Easyjet for a super early flight meant we were at the railway station in the centre of München by around 10.30am and sipping our first glühwein by 11.00 am by the skating rink at Karlsplatz. It tasted so good. My theory is that the cold weather, the beautifully decorated log cabins it is served from and the individually branded ceramic, pottery or glass tankards it is served in that makes it such an evocative experience. 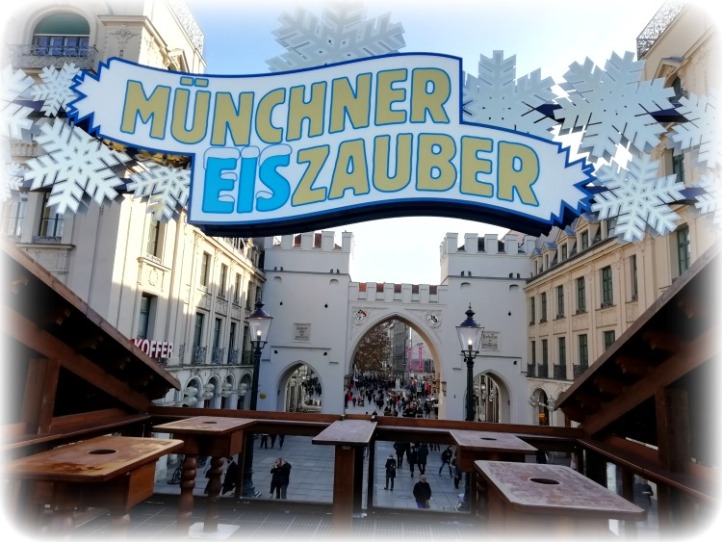 I advise adding a schluss (shot) of rum to make it really hit the spot. The choice is quite vast and most stalls offer white glühwein, hot beer, cherry glühwein and even the crazy alcohol free glühwein (why?). There is one drink that for me that surpasses all the glühwein on offer but you will have to wait for the next post for me reveal the details.  Got to hook you in somehow!! 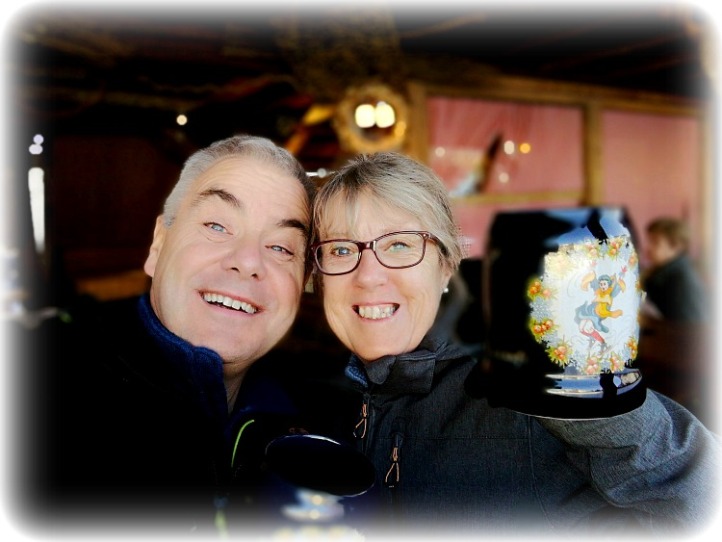 Feeling suitably warmed up we wandered down to Marienplatz where the largest number of stalls are squeezed in under the shadow of the amazing Rathaus (Town Hall) with it’s Glockenspiel. The two tiers of 43 bells and 32 life size figures play out the story of a royal marriage back in 1568 on the hours of 11am and 12pm. The 12 to 15 minute spectacle includes knights jousting and a golden rooster chirping three times to signify the end. It really draws in the crowds and there were a sea of people just staring upwards. A good time to browse the stalls if you have seen it all before. 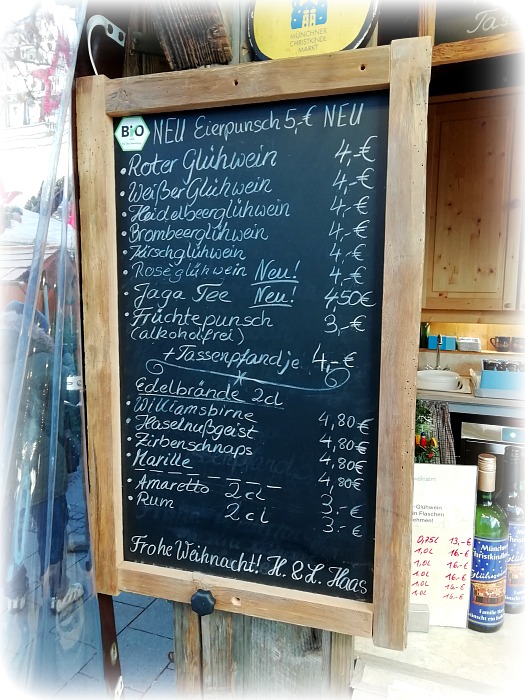 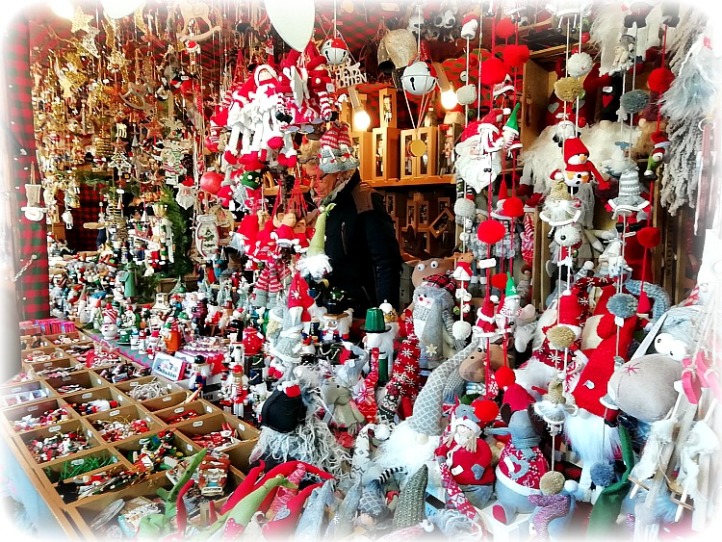 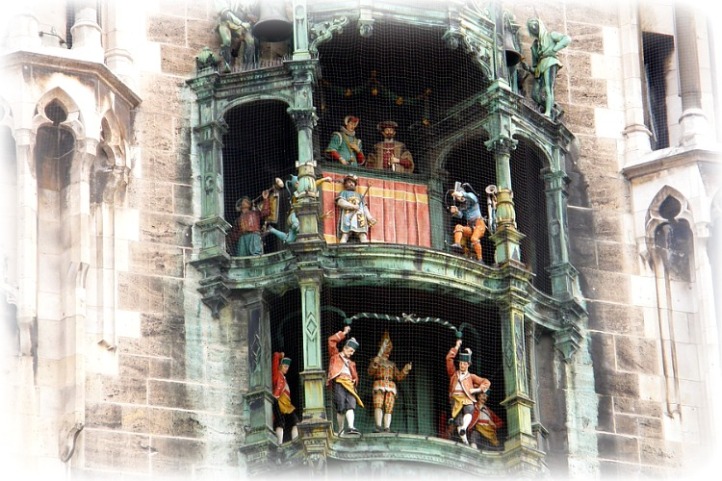 Through the glühwein infused air we caught the distinctive waft of sausage! Feeling somewhat peckish after our 3.15am alarm call we surprised ourselves by diverting from the grilling brätwurst towards the reibekuchen. Reibekuchen are potato pancakes although called by other names in different parts of Germany. Three pancakes with apple sauce, sour cream or Nutella for 4 euros. We tried to avert our eyes from the boxes of “blockfett“, basically lard, stacked high at the  back of the stall. Surely some fat is needed to stave off the winter chill?? The pancakes were being cooked and drained fresh for each order and they were a delicious starter. 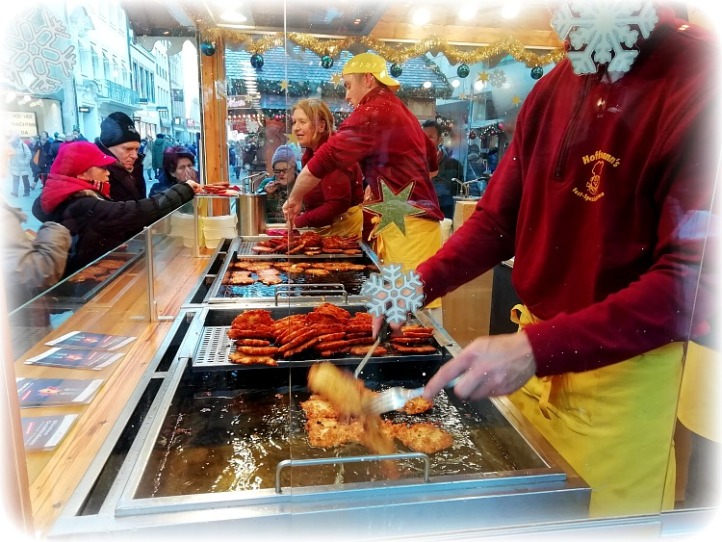 Second course was one of Jonno’s favourite, a frikadelle. These are like a giant meatball flattened to look like a burger served in a crusty roll. Not a lot of veg going on for these two courses but we had had quite a lot of fruit in the glühwein surely. 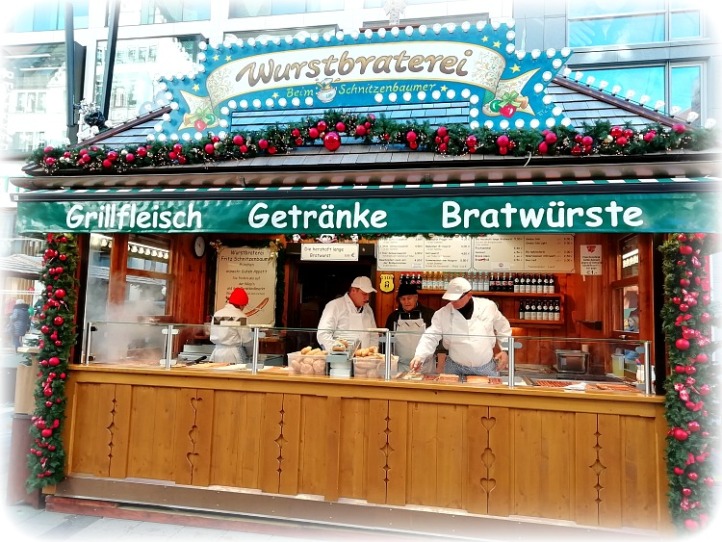 Mad Men at the Englischer Garten

The Englischer Garten is a very large public park in the centre of München. It is bigger than both Hyde Park in London and Central Park in New York. It has particularly fond memories for us as we have spent many an hour lounging around on endless summer days (with the odd game of football and frisbee thrown in obviously). So walking through the park we both had smiles on our faces despite the chill in the air and the remnants of a snowfall on the ground. 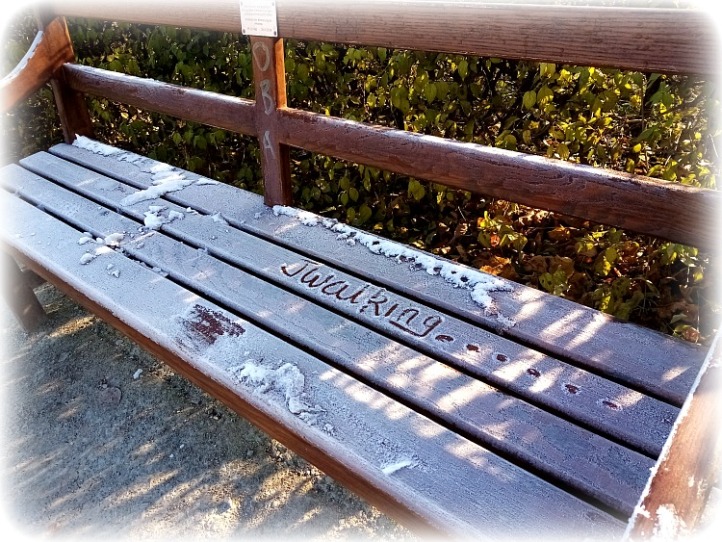 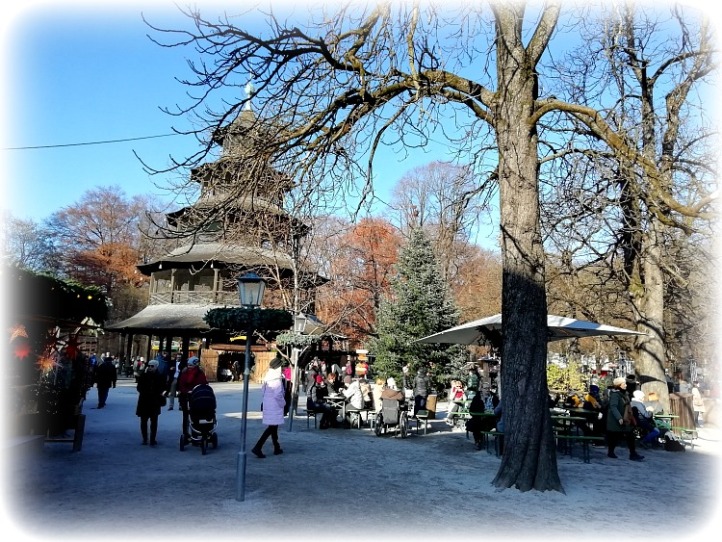 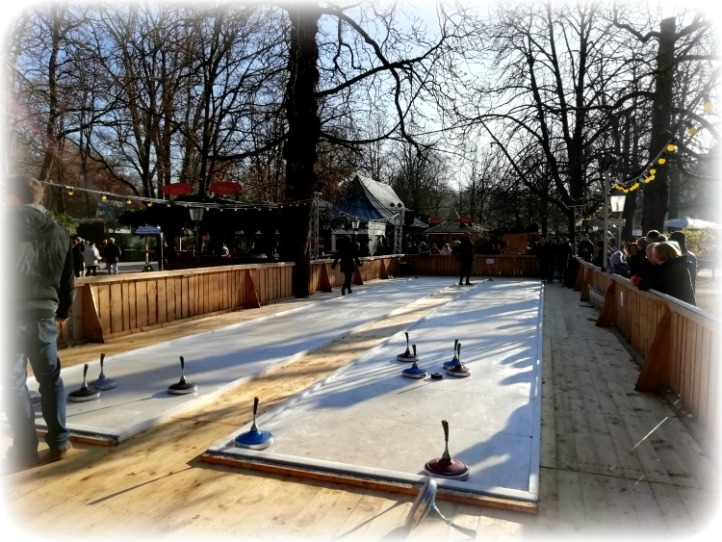 We walked through to the Chinesischer Turm which is a large pagoda style tower in the middle of a beer garden with seating for around 7,000. For our first winter visit it was great to see curling lanes and a small selection of Christmas stalls. It was bitterly cold but partaking in another glühwein built us up for the walk back through the park.

Our walk took us past another favourite location of ours – a man-made river called the Eisbach (aptly the translation is Ice Brook) passes under a bridge and creates conditions that in summer sees surfers queuing up to brave a short blast on the rapids. We were amazed to see three or four figures in the distance totally covered from head to toe in their wet suits hugging their surf boards to brave the rapids. And there was I feeling cold!! 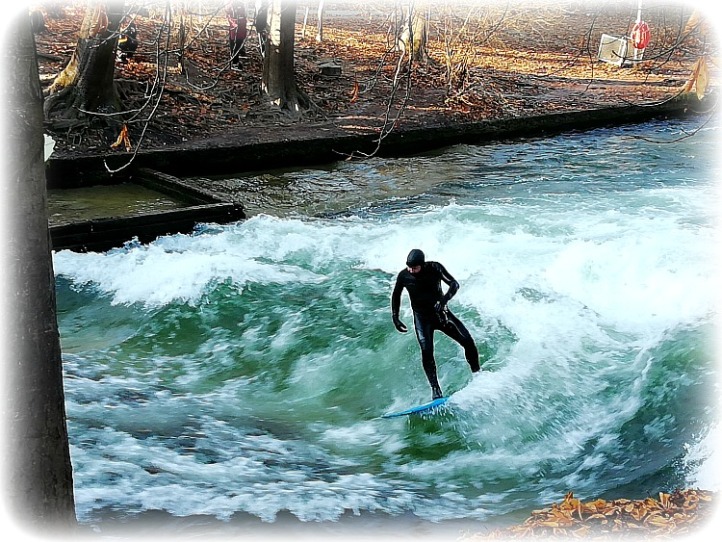 No trip to München would be complete without a visit to a few of our favourite beer halls. The social atmosphere in the halls are infectious and it is never long before you are chatting to either a local or fellow tourist. The Augustiner Bierhall and famous Hofbrauhaus were much the same as the summer but what we call the Augustiner Garten which has a huge outdoor area for benches in the summer had a few curling lanes and warming open fire pits for those hardy patrons who wanted to get the true winter experience. It made for a very photogenic sight. 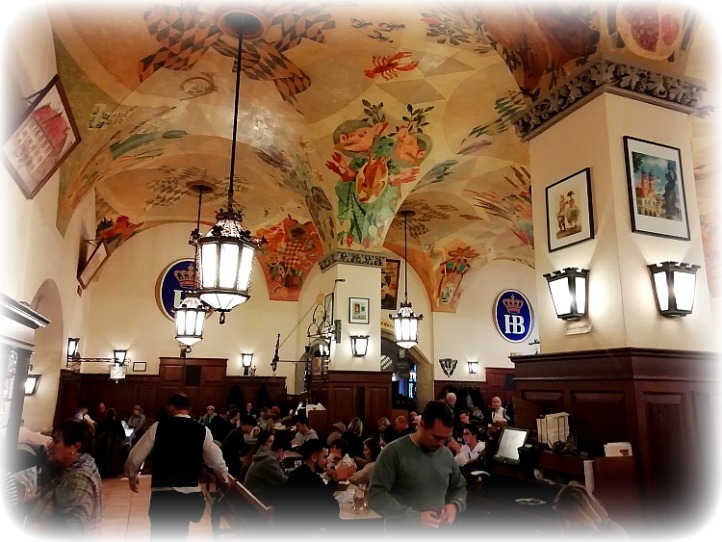 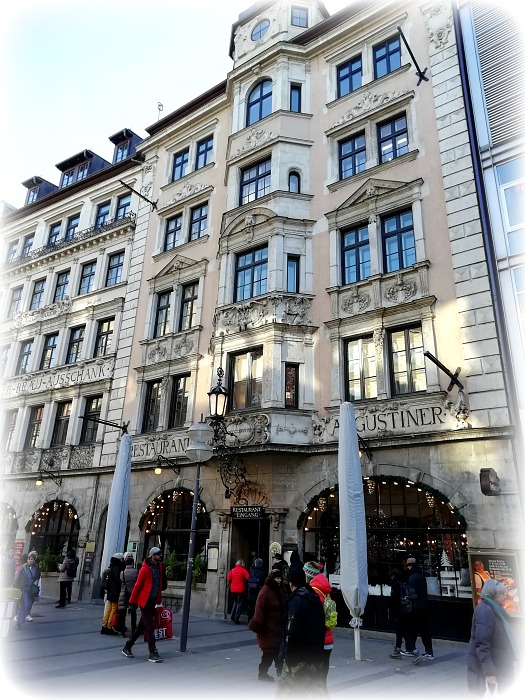 For the first time we were offered to share a bench and table in the Lagerkeller. Access is via a very steep stone spiral staircase that seems to go down, down and down some more. Originally used to store beer and keep it cool in summer the chambers under the vaulted ceiling in the cellar were filled with ice but now it is a huge underground beer hall. It felt more full of locals than other beer halls but we did end up sharing our bench with Banks and Lauren from Atlanta, Georgia, USA. We had one of those beer fuelled rambling conversations about their trip to Europe, wish list travel locations and generally put the world right. 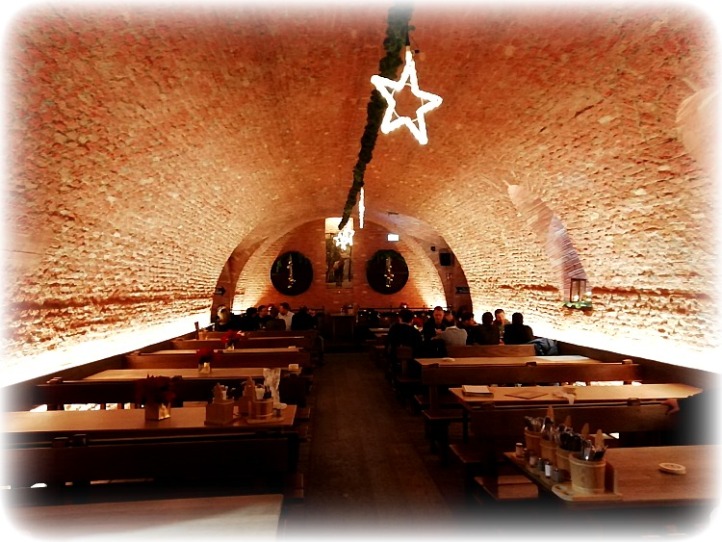 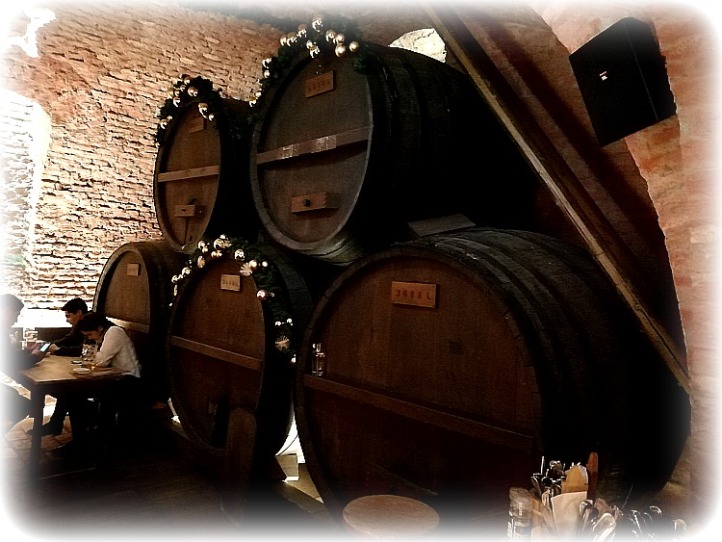 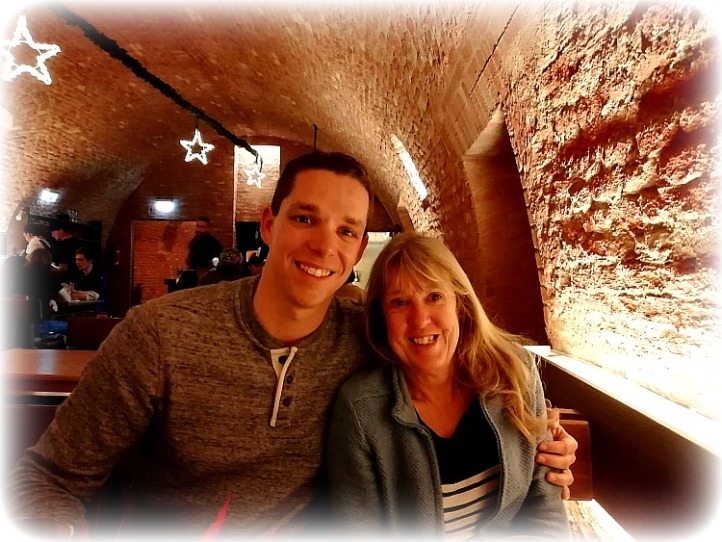 With a late flight booked back to the UK and rumours of air traffic disruption due to French transport strikes we decided that a hearty meal was needed and there was nowhere better that we could think of than the restaurant in the Ratskeller (Town Hall cellar). The entrances under the Town Hall are not obvious from the street but they are there if you know what you are looking for. We first dashed inside here during a terrific thunderstorm back in 2004, primarily to shelter from the rain and what a fortunate find it was. We would well recommend a visit in winter for it’s cosiness and in summer for it’s cool vaulted areas. 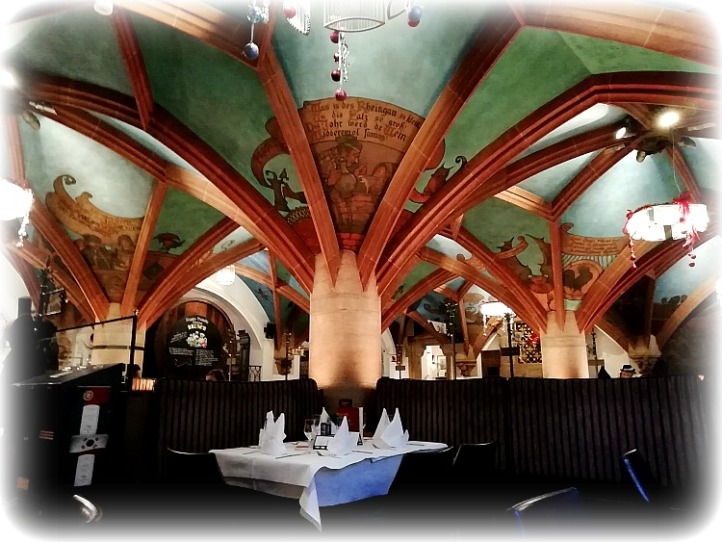 It all started long ago when opened it’s doors in 1874 and since then has been it has been hosting up to 1,100 covers in the various rooms, vaults and function rooms. The ceilings are a mass of painted scenes and depending on where you are sitting you get a totally different scene.  The food and service is excellent and not overpriced. We had two hearty main meals, two half litres of beer and a coffee for under 30 Euros.

This post seems to have been more about eating and drinking your way around the city which, to be fair, is quite prevalent at all times of year but never fear the next post will include more about the markets themselves. Our trip was 4 days (3 nights) but 3 days (2 nights) would easily be enough depending on your flight times. Some people on our flight were even doing 2 days (1 night), a bit full on with so much to see in this vibrant city.

We have already discussed plans for 2020 and have a few ideas. Unless anyone out there can whet our appetite with something else we are thinking Riga in Latvia.  Your thoughts please………… 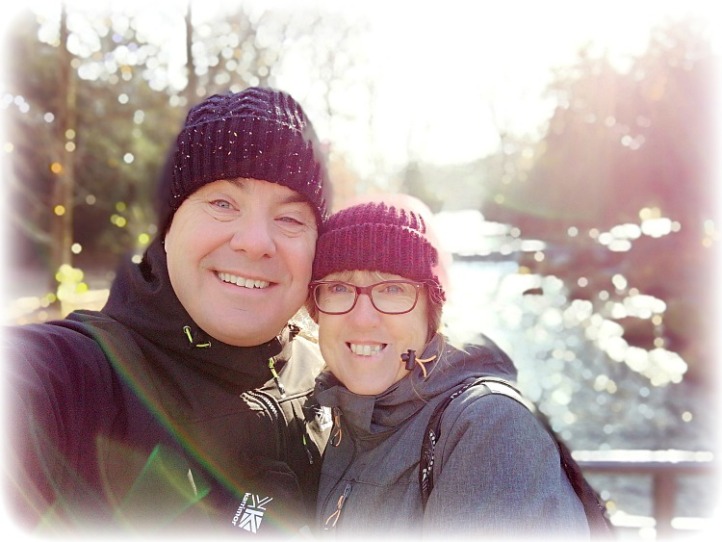 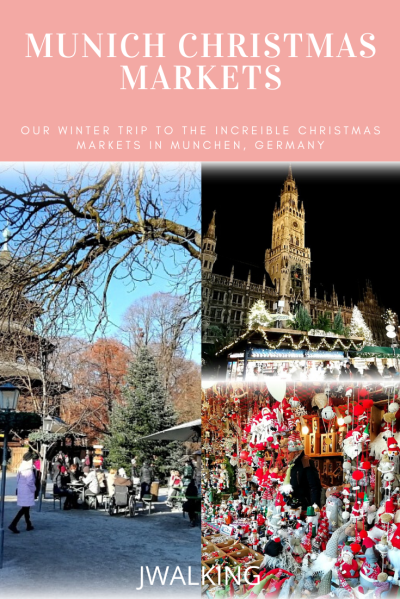