Bavarian Tales of the Chiemsee and the Hofbraukeller

Apologies for starting with a deep and meaningful thought but I’ve just read a quote by Mark Twain that perfectly sums up why Jo and I are doing this little trip. When we first started discussing the future and considering what we were going to do with our lives we both came to the same conclusion that there must be more to life now than merely waiting for retirement and being ‘sensible’. That initial decision that we really were going to ‘do it’ was confirmed by Mr Twains words.

“Twenty years from now you will be more disappointed by the things you didn’t do than by the ones you did do”.

This seems to be becoming our philosophy. We are determined now to not regret anything and seem to have talked each other into saying Yes to pretty much anything. Could be dodgy sometimes I know but we’re really going for it. One of the things I keep saying Yes to is ‘Do you wanna cook tonight?’. Not sure if it’s a set up but I’m doing my best’. More about the latest in Jonno’s Cooking Diary later (email for full recipes, three course suggestions, and all other culinary advice).

Our Day Out at the Chiemsee

After our beautiful day out to the Starnberger See we decided that we fancied another trip to a German seaside resort. Well, not actually a seaside resort as they don’t have any seasides down here but a lake resort that they’ve made to resemble a seaside. Got it? There is a lovely lake to the East of Zorneding called the Chiemsee that we decided to visit. It’s not far from Salzburg so was around 90 minutes via a couple of trains. So easy to do though as the German railway is so efficient and on time that the journey feels relaxing.

We travelled to a town called Prien am Chiemsee that is right on the lake, or so we thought. On leaving the station it turned out to be a fair walk which we were happy to undertake but realised very quickly that most people got there in the little steam train. They waved as they went by too! No way were we walking back later on even though it was a pleasant walk.

The Chiemsee, or the Bavarian Sea, is apparently the largest lake in Bavaria and is stunning. With the Alps rising at one end and the island of Herrenchemsee in the middle it has the classic fairytale look of much of southern Germany. Once again Jo’s favourite historical figure Ludwig II was involved as he built a huge palace on the island and developed part of the promenade. Everything in Bavaria seems to have Ludwigs influence on it somehow.

The weather wasn’t as roasting hot as previous days, we actually had a few clouds, so it was bliss to just walk along the shore watching the paddle steamer and passenger ships coming and going. Bit of a picnic and a paddle and some serious people-watching and we were happy as could be.

Lovely ride back on the steam train with a bunch of crazy German teenagers before the obligatory ice cream and home. Such a lovely day.

So I mentioned cooking earlier for some reason. No idea really. I keep having some sort of seizure and offering to cook dinner. Jo seems to love it even though I’m seriously hopeless and childlike in my methods, or is that why she loves it? Anyway, this week it was my new dish ‘Wolfgangs German Goulash‘. The ingredients were a load of stuff cut up and dumped in various pans, mixed up a bit, and then thrown onto a plate. I stressed, Jo calmed, and the food turned out ‘sehr gut‘.

One of the things that we both really love about Munich is the beer gardens. Now before all you ladies start moaning about beer drinking and getting drunk etc, it really isn’t about the beer at all. We absolutely adore the laid back, friendly atmosphere and the cross section of people that you see there. Yesterday we visited the famous Hofbraukeller on the banks of the River Isar. It’s not the touristy Hofbrauhaus that everyone visits but an older more local restaurant and garden that is a real favourite of all the locals. The absolute genius of the place is that you can have a posh meal with tablecloth, waited on by ledorhosen-wearing waiters. Or you can just sit at wooden tables again waited on. Or you can go self service at the beer and food counters and sit on long benches. 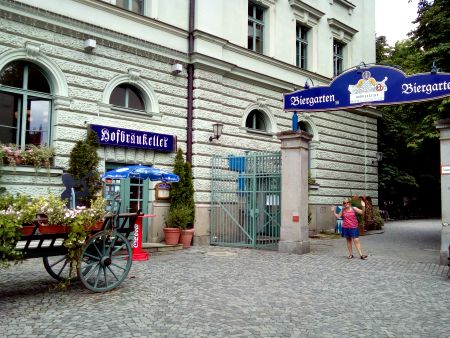 There were big family groups, young couples, a hen party, couples with young children, groups of old guys ……….. all sitting together enjoying the sunshine and the garden. It’s so sociable and friendly and we could both honestly sit there all day long. Munich’s beer gardens are an absolute wonder that everyone should experience. We can never ever get enough of them.

On the way to the Hofbraukeller though we diverted to visit somewhere that I had always wanted to go. I’ve always been interested in football history as most of you will know and have always been fascinated and touched by the Munich Air Disaster. For those that don’t know, apologies if you do, there was a plane crash in February 1958 in Munich involving the Manchester United Football Club. At the time United were arguably the best side in England and trying to win the European Cup.

Their side was known as the ‘Busby Babes’ because the manager was Matt Busby and so many of the team were under the age of 22. They had just played a semi-final in Belgrade in Yugoslavia and on the way back stopped to refuel in Munich. After two aborted take-offs the pilot went for a third attempt. Unfortunately a combination of slush on the runway and ice on the wings prevented the aircraft taking off and it crashed though the airport fences and hit farm buildings before exploding. Twenty three people were killed including journalists, club staff, civilians and players. The crash ripped the heart out of the Manchester United team.

I have always had a great emotional interest and we managed to visit the memorial to the tragedy. It’s very understated and small but it meant a lot to me just to see it and be there. Jo was so patient too as I rambled on and on about the history and the players. She’s so good (and now she knows all about it, in excruciating detail). 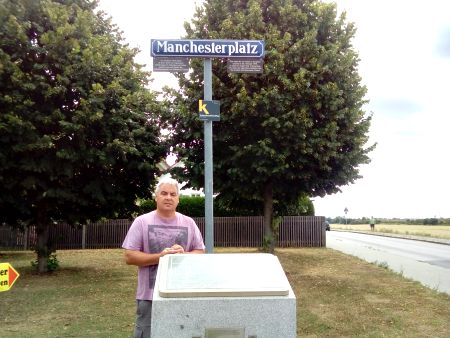 So from the memorial it was a lovely long walk through parks and gardens until we found ourselves having yet another beer (yes another one) on the banks of the lake in the English Garden. Once again watching the world go by in the Bavarian sunshine with a Paulaner beer and a pretzel (everyone, and I mean everyone, eats pretzels here). A beautiful end to a beautiful day.

We haven’t got too long to go now before we pack up and move on, next Saturday sees us training it across to Graz in Austria for the next stage of the little trip. We love Munich so much but are excited about another adventure and meeting some new people. Plus, only a few weeks now until Sam and Tabitha’s big day so we’re looking forward to seeing all of the boys for a long weekend. Not sure about the drive from Graz to Bled in Slovenia but as we keep saying, it’s an adventure. 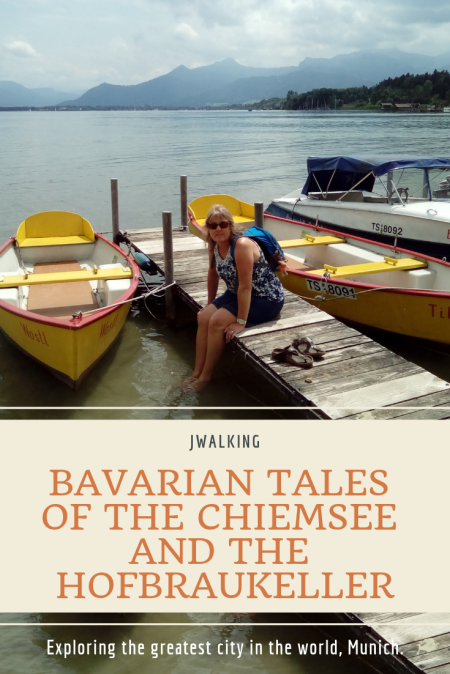