In the footsteps of a King

We felt it was time for a few trips to “get some culture and history”.  The first trip was to Schl0ß Nymphenberg.  Not so much a castle but more of a palace.  Formerly, it was the favourite summer residence of the rulers of Bavaria. Although there was originally a small hunting lodge in that location, the main palace was commissioned in 1664 by the ruling couple to celebrate the arrival of their son, Maximilian II Emanuel.  They had a 10 year wait for the arrival of a child so it was something to celebrate.   Two hundred years later, in 1845 another famous king of Bavaria was born there, King Ludwig II – he of the romantic castles.  (The most famous is Schloß Neuschwanstein (“New Swan-on-the-Rock castle”) the dramatic fortress with soaring fairy-tale towers.   Memorable also as the home to Baron Bomburst, the ruler of Vulgaria in the film Chitty Chitty Bang Bang – is there no end to my supply of quiz question answers?).  Unfortunately, King Ludwig never got to see the completion of his project at Scholß Neuschwanstein. See what became of that old romantic Ludwig in a while….

The castle has been expanded and transformed over the ensuing years. We took some long shady walks in the gardens first and then lounged with a picnic.  There were a few school parties that passed through but apart from that it was quiet and tranquil.  There was even one gondola tempting us for a trip along the lake towards the waterfall.  It was €15 each which wasn’t too extortionate considering the location and, even though it was tempting, somehow not quite right in Germany.  If you look closely you will see it moored up on the lake in the picture below.

The outside of the Palace is fairly understated really but inside it is very ornate with lots of elaborate architectural features and frescoes.  Perhaps we are cultural heathens or maybe it was just the weather, but we preferred the gardens and the long boulevard that led down to a waterfall.  Then, the highlight for me.  A folly.  I love a folly – they are so meaningless in some ways but so meaningful to their creator.  I enjoy trying to guess why it was built, why in that design and a number of other unanswerable questions.

After all this culture in boiling temperatures, guess what we needed? Yes you got it, some cool beer.  Can you believe that there is a beer garden in München which, despite his many trips, has until now has eluded Jon?  It is called the Hirschgarten and is not far from the Palace so off we trekked.  It can seat 8,000 people and, despite this staggering figure, it still has a community feel.  There is the choice of waiter or self service for both drinks and food.  There is a large animal park adjacent to some of the seating so you can watch the deer meander around but no smells or flies, thankfully.  There was also a visiting fun fair and market stalls on the day we were there which was quiet but no doubt busy evening and weekends, especially as the children seem to have finished for the summer now. 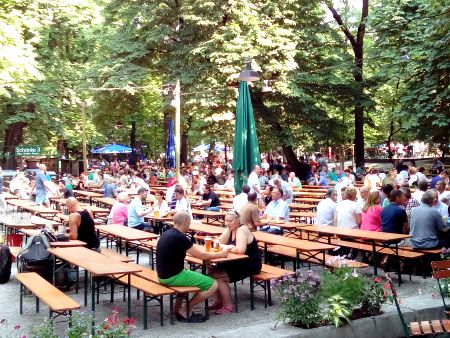 Our next planned adventure was to Starnbergersee.  We were given a few ideas of places to see by our host, Monika, and we figured out that we could get to this lake on our S Bahn track.  The S Bahn is part overground and part underground, basically the same as the London underground I suppose.  We realised if we travelled the whole length of the S6 line we could get to Starnberg which is right on the edge of the lake.  It took about 75 minutes and the group ticket return for us both was €14.80 (£10), so a bit of bargain compared to UK trains. The train literally arrived at the edge of the lake and this first photo was basically what you saw when you stepped off the platform. There was quite a lot of heat haze but the backdrop is the alps.

It is the fifth largest lake in Germany and Starnberg sits at the very northern edge.  We went on a Monday so it was relatively quiet but you could see that it was all set up as the equivalent to a seaside resort.  Motor and rowing boats were on hire, boat trips across the lake and plenty of people swimming.  We walked around the lake and came across a Moët and Chandon Champagne Bar on a pontoon in the lake.  There were luxurious white sofas and all looked like something from St Tropez. They had even shipped in their own sand and deck chairs.  I think even a bottle of water was beyond our budget.

Anyway, we found an equally stunning location to sit and admire the swimmers, pedloes, paddle boarders and Löwenbrau is sure to quench your thirst more than a silly glass of bubbly.   Whilst there four cyclists arrived, they were from Austria and were obviously doing a similar cycling tour to the one Jon and I completed in 2013 around Lake Constanz.  We had bit of cycling holiday envy, I think it was because of the location.  There must be something about the combination of a bike and a lake.

Later we had a bit of a paddle but have vowed to return with swimming gear and to partake in a M&C with two straws.

Nearly forgot the continuing saga of King Ludwig II.   The King never married although there was an engagement at one stage that was called off.  Although Ludwig, only used royal funds for his projects, he was not very astute at keeping Bavaria’s finances in order and by 1885 the country was billions of Deutsche Marks in debt.  He wanted his ministers to ask other European royals for loans (sound familiar – I wondered if he considered asking Greece?) but the government wanted to depose him.  His successor only agreed to rule if it was proved that Ludwig was insane so a serious of reports were put together which included things such as, eating outdoors in the cold, wearing heavy clothes in summer, childish table manners – the first two of which we Brits do all the time.  A number of bribes took place to gather more evidence and it was decided, by doctors who had never met him, that he had paranoia and was unfit to rule and was deposed. He was sent into captivity with his doctor to Berg Castle on Starnbergersee.  This is where it gets weird.  The day after he was deposed King Ludwig and his doctor were both found dead in the Starnbergersee in waist-high water.  The doctor had injuries to his head and shoulders and it was claimed that Ludwig drowned, although he had no water in his lungs. This raises a number of very serious historical questions: 1) Was he murdered?  2) What would his medical diagnosis have been today? 3) Was his deposition legal? 4) Did he hit the Moët bar too hard?

That brings us to the end of this historical murder mystery and how we had unwittingly followed the King from birth to sad demise……….. and to lift the mood, there is no apology for finishing on a selfie (no stick used!)