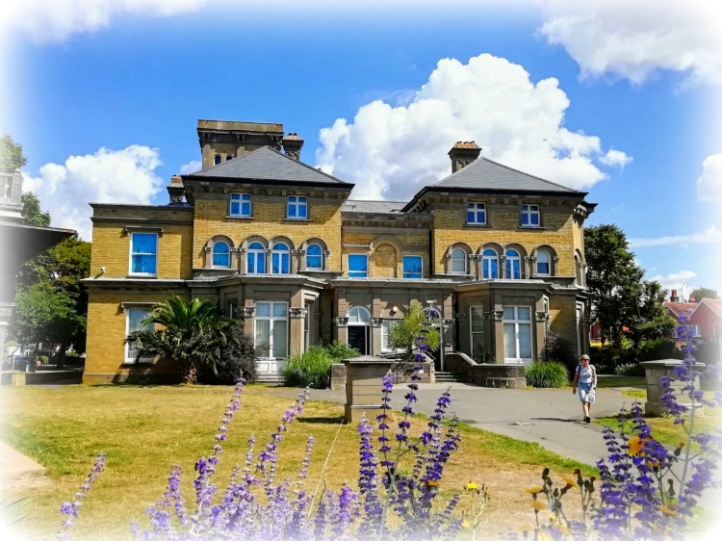 “Hove, actually”  is supposedly the common response you get if you ask someone from Hove if they are from Brighton. I suppose it is a humorous way to distinguish themselves from their close neighbours. Famous Brighton resident and “lovie“, Laurence Olivier, may have been the instigator of this phrase but it was so frequently used that in the 1990s Hove actually (forgive the pun) used the phrase to promote tourism. We haven’t heard this said ourselves yet but we will be keeping our ears peeled and may even use it ourselves. We are, after all, temporary residents.

When arriving at a new house sit or location we spend the first few days getting to grips with the house, pets, plants and generally where things are kept. This is swiftly followed by a stock take of anything that needs using up on the fresh food front before locating and heading for the local supermarket. Here in Hove we have a large Tesco about 15-20 minutes away and a Waitrose about a similar distance in the opposite direction. We are probably more in the Tesco category of shopper but it is nice to have a scout around a Waitrose occasionally but I think the trick is to be selective.

Once we have all that under our belt it is time to explore or, as Jon always teases me, “get our bearings“. Nothing wrong with a good old nautical phrase from the 1600s especially as we are by the sea or “strolling along the prom, prom, prom….“. I have no end of these little phrases that probably drive Jonno mad!!

Jon worked out about a 7 mile route to take us around some of the sights to the west of Hove. We started by arriving at the impressive building, but temporarily closed, Hove Museum. The notice said it would be closed until 2021 so don’t plan a visit anytime too soon.

This grand villa was built back in the 1870s and the owner did a lot of grand entertaining here as well as opening the grounds for charity events. The Oliver family lived here until the first world war when it was used to house German prisons of war (in style!) The council took it over in 1926 and the museum was opened in 1927.

Even though we couldn’t get inside, the impressive Jaipur Gate stands in the gardens at the front of the museum. This huge gate was commissioned for a colonial and Indian themed exhibition in London in 1886. Designed by two English military officers, the Maharajah of Jaipur paid for it and it was carved and assembled by Indian craftsmen. The gate was donated to Hove Museum for its opening and has been restored over the years. It is in great condition considering it’s age and that it is exposed to the elements.

The next part of our walk took us down towards the sea front and through an area known as the Western Esplanade and Lawns. It was perfect weather and there were sunbathers, swimmers, runners and others having a coffee at the few open beach cafe’s. We loved their innovative names. 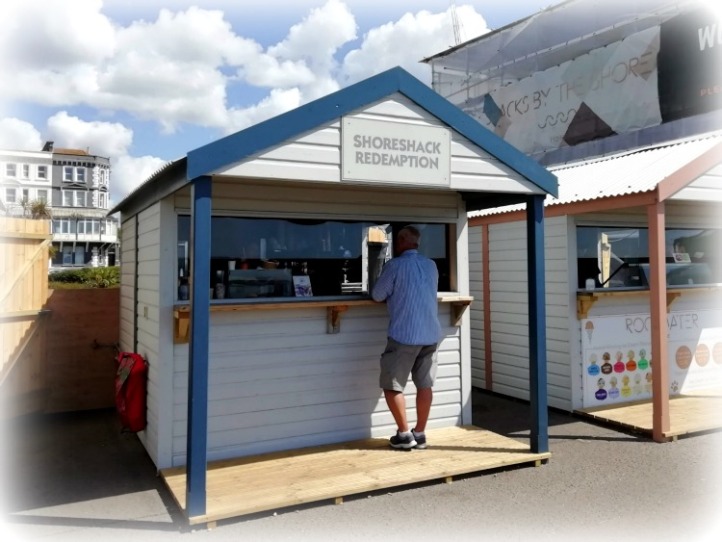 Further along the esplanade my beady little eye spied a plaque at the base of a fire beacon. This is a replica of one of the many that stood over 400 years ago along the south coast from Cornwall to London as a “call to arms” system warning of the arrival of an invading army. Let me set the scene.

In 1588, the Spanish Armada approached England hoping to overthrow Queen Elizabeth I. Beacons were lit and Sir Francis Drake and his men had time to prepare defences and set sail to engage them. Today, with the views out to sea and people enjoying the sunshine catching our attention, it would be so easy to walk past and not even notice this nod to history. Without this early warning system, English history would have to be re-written.

Evidently back in 1988 all the replica beacons along the coast were lit for the 400th anniversary of the defeat of the Armada – I bet that was an impressive sight. 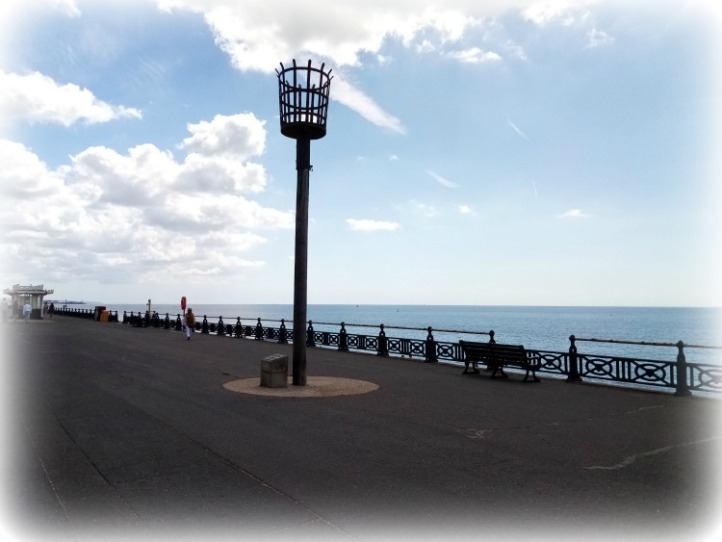 More or less opposite the beacon is Hove Lagoon. So many activities going on it was difficult to know where to look first. At one end there is a cafe, a few children’s rides and a shallow lagoon with a pirate theme and pedalos. In the adjacent larger lagoon supervised activities and team building exercises were going on for predominantly teenagers. Paddleboarding, windsurfing, wake boarding, sailing, raft building. It looked such a great place for young people to learn new skills and have fun especially after having been couped up in lockdown for a few months. 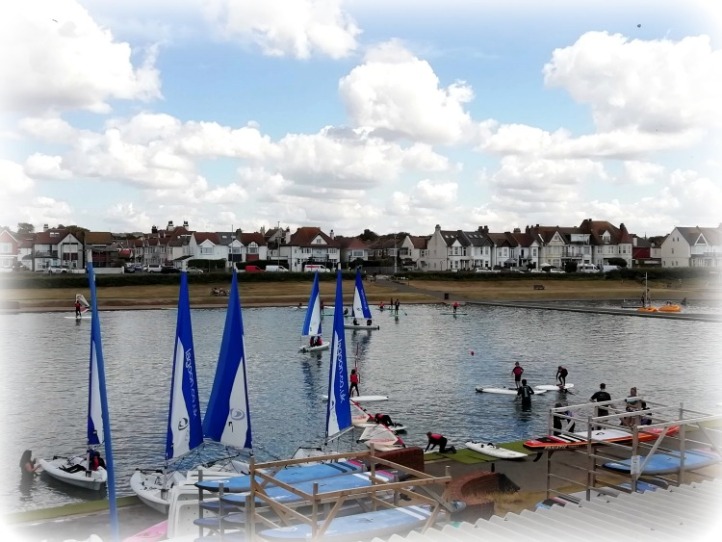 Who would want to visit a cemetery? Me! I find them peaceful, interesting places that encapsulate a town/village. Reading a few names out loud of those long gone with overgrown neglected headstones makes me feel that they are being remembered in a small way.

My positive thoughts probably come from taking my Grandma Ann to tidy up and lay holly on my Grandad and Great Grandparents graves during the 1970s and my own return visits now to do the same. I know not everybody feels the same way and Jon has gone from humouring me to heading off to read a few headstones of his own.

Something I had never seen before is gateway memorials and there were one of two of these. Perhaps a local stonemason speciality?

Apart from Arlington Cemetery in Washington DC or our own National Aboretum, I don’t think I have ever been to such a large cemetery. It is over 50 acres but only opened in 1882 which is young by English cemetery standards. The older memorials seem to be to the south of the Old Shoreham Road where there is a Victorian chapel whereas the site to the north of the road have sections for all faiths. A reflection of the diverse multi faith community that is now “Hove, actually“. 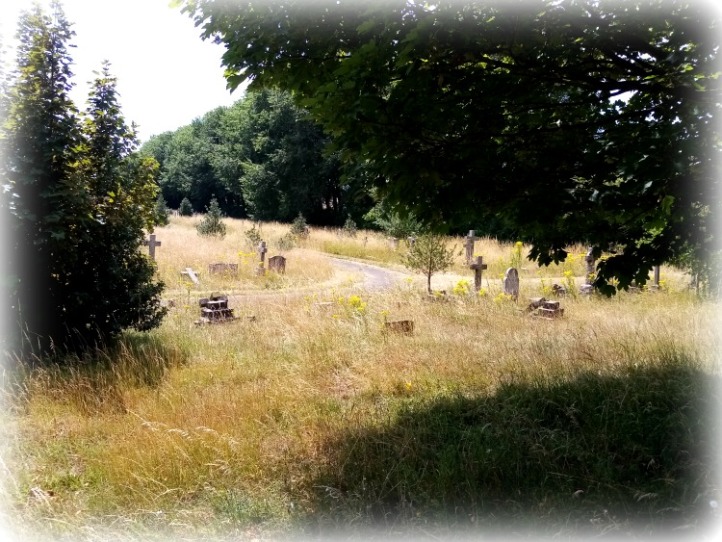 The Goldstone and Hove Park

Hove Park is not far from where we are staying and we have walked around it a few times already but on this final leg of today’s walk we found the “Goldstone“. Sports fans will know that this was the name of Brighton & Hove Albion FC ground for over 90 years (up until 1997) but how the ground got that name is another matter.

The large boulder called the Goldstone was found on farmland outside Hove and there is a legend that the Devil had thrown it there. During the early 19th century it was adopted as a sacred stone by the Druids which led to large numbers of visitors tramping over the fields, damaging crops to get to it. So the farmer promptly buried the stone to protect his land. The stone lay buried until 1900 when it was rediscovered, unearthed and put on display in Hove Park where it is to this day. 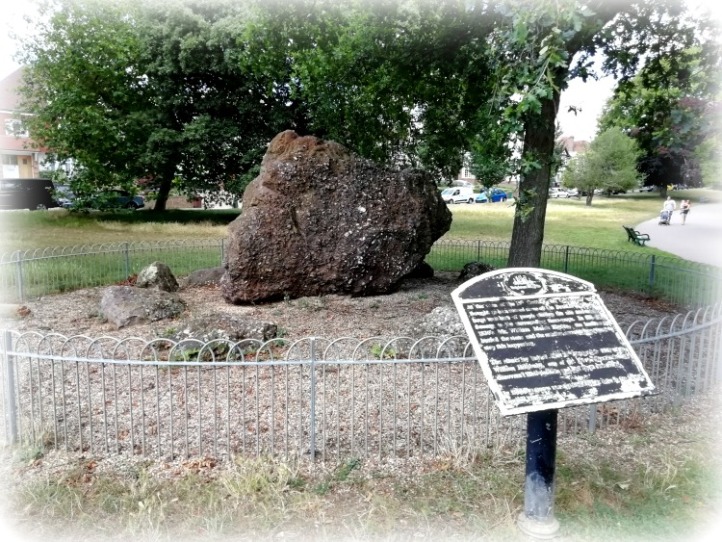 The park is a hive of activity from dawn to dusk on most days. Tennis, football, personal training, bootcamps, a miniature train (currently closed) and even a cafe. The resident Mr Whippy ice-cream van was doing a roaring trade too.

Just a short walk from the park and we were home. I can safely say, thanks to Jon’s route, that I have “my bearings” and despite this being a lovely initiation to Hove, a visit from our youngest son, Ryan topped the bill this week in every way. One happy Mum and Dad!! 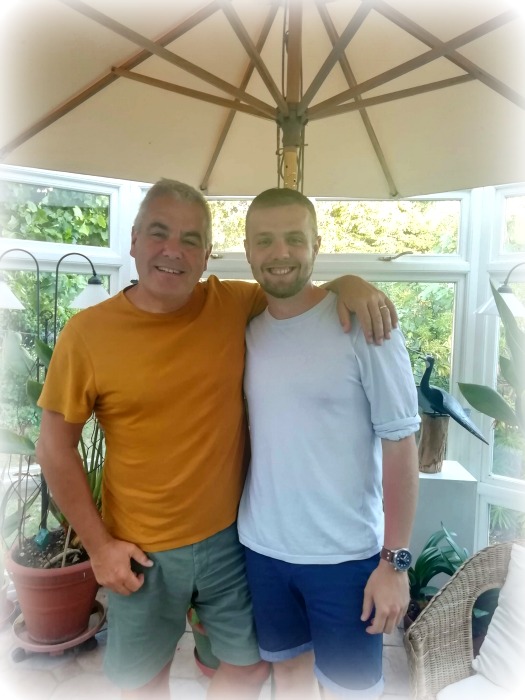 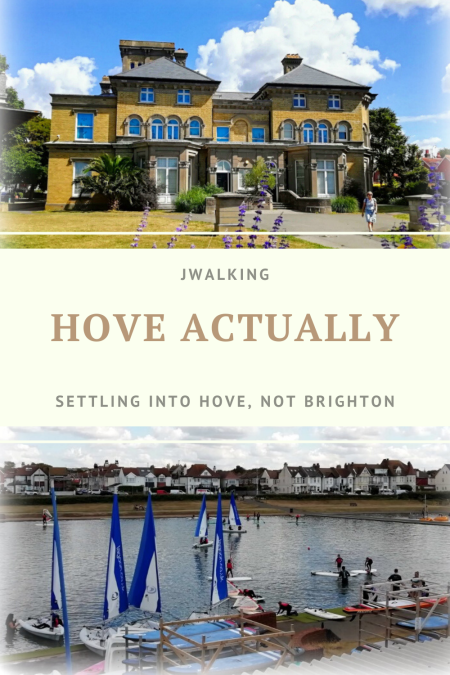