Is this chap scaring away visitors to the Quarantine Station?

We continue to be overwhelmed by Manly.  The Scenic Walk that we completed in two stints was fantastic but, having now visited the Quarantine Station (Q Station) and Quarantine Beach, we may have to adjust our “5 best things in Sydney” advice. By the way, the photo is of a blue tongued lizard – more on that later.

Phil, our host, had mentioned this place a few times and, once he had added that it is his wife’s favourite walk in Manly, we just had to give it a go.  Phil offered to join us and what could be better than having the local knowledge and the chance to natter about Manly on the way. Our own private tour guide.  Cheers Phil!

The obvious part was that it was a quarantine station used to screen the early immigrants for all sorts of nasty European diseases, smallpox, influenza and the like but, as always, there was so much more to the place.  Despite being open to the public, there was hardly a soul to be seen in this breathtaking location.

From around 1830 to the early 1970s  immigrants and the cargo where off loaded at Quarantine Bay at the entrance to Sydney Harbour and, for safety, at what seemed to be a reasonable distance from the city to contain any nasty imported infections. What was not so obvious was that the Station has also been used in more recent times to house evacuees from a cyclone in Darwin in  1974 and in 1975 Operation Babylift in which orphans from Vietnam were airlifted to Australia.

Originally, the accommodation and food was provided to reflect the immigrants class of passage, First Class through to Third Class and the average length of stay was around 40 days.

There are over 1500 rock carvings detailing the arrival of ships and the fate of their crew and passengers.  I could have spent a couple of days reading them all and a couple of days more reading the ships’ logs in the museum.  The medical and quarantine staff braved the risk of infection to live in more or less total seclusion from society to assess and care for these new arrivals. 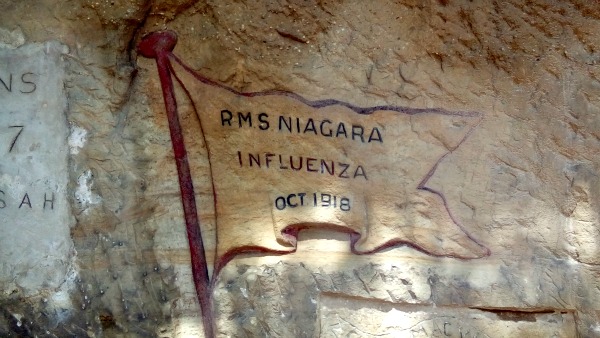 Of course, some of the new arrivals were carrying disease and did not live to settle in Australia.  Perhaps the line of empty coffins on their arrival at the wharf did little to aid their recovery!

The whole place was completely deserted.  I think we only saw two other visitors despite the site now being used for conferences, dining in the beach side restaurant and, most perfect of all, as a retreat to recharge you batteries for a weekend. The views of Sydney Harbour were beyond description.

After a lap around the museum, we sat for a coffee which is when Phil noticed what he initially thought was a snake but ended up being a blue tongued lizard.  The head looks just like a snake but on closer inspection there are little legs.  Up until this point we had only met water dragons so this was a new encounter for us so we were pleased to have him to hide behind, sorry I mean his local knowledge.

No booking at the retreat for us to recharge our batteries just an afternoon on Collins Beach where Jon undertook a dam project in the sand.  Where were you Shaun, Sam and Ryan when we needed you!!

Nearly time to pack up and move on  …. to where we hear you ask but you will have to wait and see.