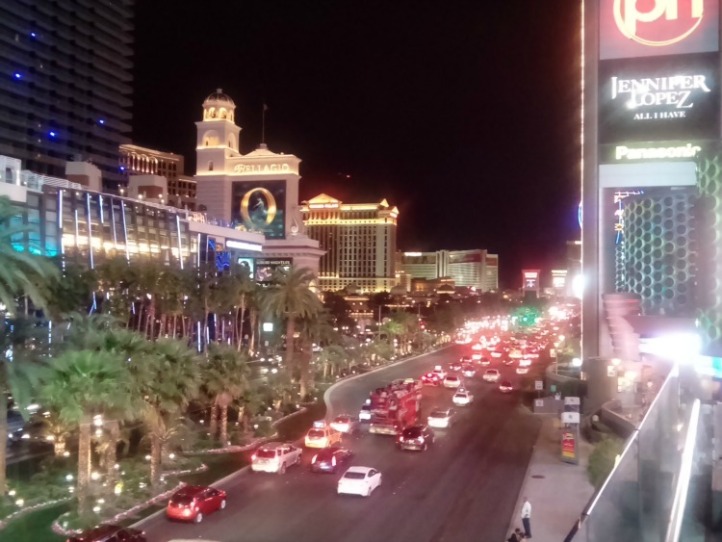 Three days of Las Vegas and could it be like Marmite, either loving or hating it? For us there is probably something in-between. We definitely can’t say we love it as it is not really a land-sailing JWalking type of place but it has to be seen to be believed.

Feeling the need for a walk away from the Bright Light City, we decided to head away from The Strip to the famous Welcome to Las Vegas sign.  On our way there a couple of intersections were closed off and there was a heavy police presence. We found out that the Vice-President, Joe Biden, had just arrived in Air Force Two to perform with Lady GaGa.  An odd pairing you may think to do a gig in Las Vegas but they were here to talk to students at the University of Nevada about taking a stand against sexual assault and domestic violence.  A few steps further on and we saw Air Force Two parked up like a taxi on the side of the runway at McCarran Airport – beats a hummer limo I suppose. Twenty minutes walk further on brought us to the right place and strangely we saw the queue of tourists eager for a selfie even before we saw the sign.  We dutifully took our place in the queue of about 15 people and immediately got chatting to a group of ladies who were from Minnesota. It looked like a hen party of Mums, Aunts and younger girls but it turned out that they followed a family tradition of a girls only trip to Las Vegas every year. A couple of the younger  members of the party had the customary yard of cocktail round their necks.  Well it was 9.30am after all and quite warm.  They kindly offered to take a few photos of us rather than us try and do the impossible selfie.

Then we returned the compliment and continued to do so for the 20 minute walk back.  At every photo opportunity spotted by the Minnesota Maidens we were handed a variety of cell phones and cameras to record their antics.  It was fun and we said our farewells outside the Little Church of the West Wedding Chapel as they headed off to The Strip to replenish their dwindling liquid refreshment supplies.

It was our last full day in town so we decided to go to a few venues we had missed.  The first of which was the Mandalay Bay Hotel.  A taxi-driver had told us that the Foundation Lounge on the top floor gave a good view of The Strip by night so we wanted to do a recce and maybe return in the evening. Suffice to say there was a dress code not to our liking (or wardrobe supplies) so we had to give that one a miss. It was not a wasted trip though because while Jon was trying to get a sneaky peek at the sports channels in one of the bars in the casino I met possibly the most interesting person in our US travels so far. His name was Jim. With a distinct lack of plaques to read in this crazy place, I just started to look for anything of interest that didn’t have a flashing light on it and lo and behold tucked away at the side of the casino was a very traditional three seat shoe shine stall manned by Jim. I politely asked if I could take a photo and we got chatting. He was a very spritely 92 years old and started shoe shining in New York in 1932.  Yes 1932!!! He was also a veteran of Normandy and had so many experiences to recount. I only wish I had shoes that he could shine so I could listen to more of his stories of life past and present in New York and Las Vegas, plus the many in between. After a rummage in his drawers – don’t mind if I do – to show me the tools of his trade I left him sitting on his stool with a faraway look.  Maybe he was back in New York or on a troop carrier in the channel, who knows? 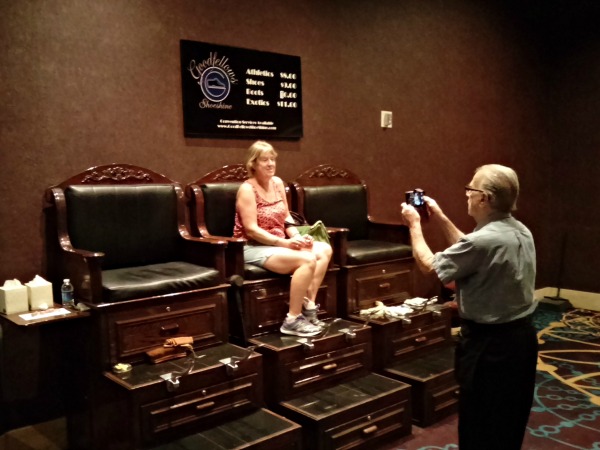 Jon and I so far had resisted the temptation to play the tables.  Partly through lack of knowledge, partly through fear of blowing the budget and partly through a certain apathy to it all.  It was now or never so we started stalking the roulette tables to get a feel for the game.  At most tables there is an electronic display of what numbers and colours have come up for the last 20 or so spins so if you want to assess the probability, etc it might help establish a pattern. Jon, however, has a very sound theory which is that the majority of the games played, ie roulette, craps, big six and even black jack to a degree depend purely on luck and no amount of calculating and probability will help to secure a win.  While we were watching the run of play at the roulette wheel, one of the supervisors saw that we were looking very closely at the game and piles of chips and asked if he could help.  The supervisors look after about 6 tables each and just monitor what is going on with the croupiers and players on each table.  His name was Ronnie and he had been in the casino game for over 30 years.  He was really helpful explaining the run of play and odds but revealed that he had never in his life placed a bet.  (Unlike one of the croupiers we overheard telling a colleague that he was finishing his shift early to meet with his bankruptcy attorney.)  Did we play?  What do you think?  What are the odds that we did against those that we didn’t? Can you see either of us in the picture? 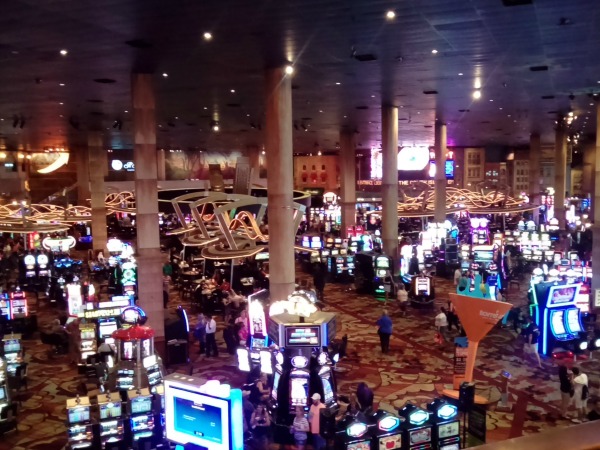 After all this socialising it was time to get one last view of the lights on The Strip.  So it was off to the musically co-ordinated Bellagio fountains for a few tunes and then back to fairy-tale Camelot (aka Excalibur) for some sleep before heading east the next day. 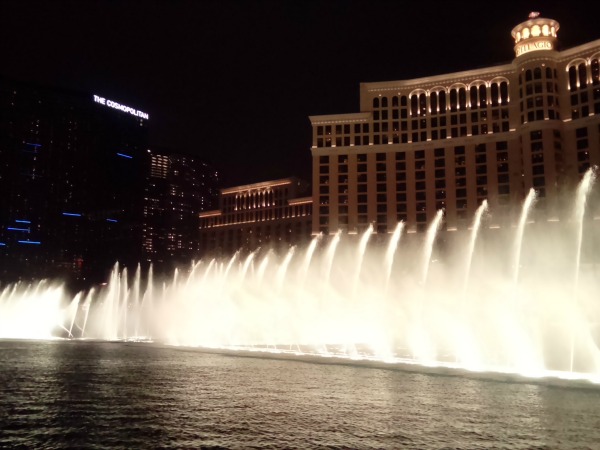 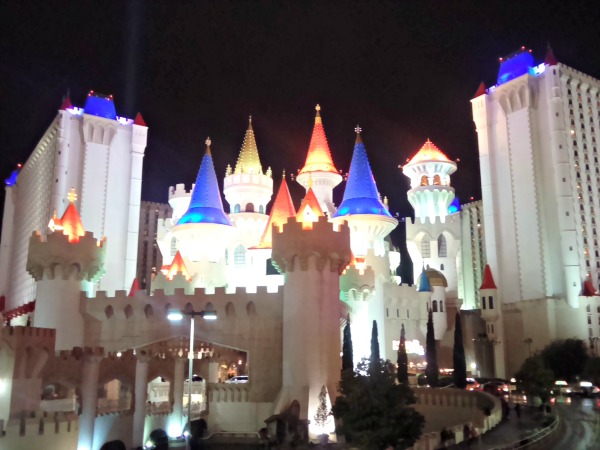 To sum up the Bright Light City, for me, is that the visit has confirmed a long held opinion that I would hate to come to America and only see Las Vegas as it doesn’t seem like a real place, just like a massive OTT amusement arcade with each gaming machine, hotel and show trying to out do the next.  The flip side is that millions of people come each year for the pure escapism, such as our Minnesota Maidens, and feel the better for it.  Maybe I will leave the last word to a couple of girls who were in front of us when we were walking back to our hotel.  Having passed some very fit guys one of the girls grabbing one of the guys for a kiss before walking on. We heard them say to each other, “OMG did you see how sexy that guy was?” To which her friend screamed, “WHOAAA  LAS VEGAS – I LOVE IT!”.