A few days ago, I got one of my proverbial “bees in my bonnet”.  I kept thinking that here we are on the California coast but the only sighting of the sea was the massive harbour.  After a bit of research, ie, reading an article in the San Diegan magazine, the Coaster looked like the trip for us.  The double-decker train runs about once an hour up the coast from the Santa Fe Depot in San Diego to Oceanside.  On certain parts of the trip, the rails hug a bank high above the Pacific and if you could open the door you could jump straight down into the sea.  Sounded like just the trip for us and would truly rid my bonnet of bees.

Santa Fe Depot (Warning: Do not call it an Amtrak Station)

We hitched a ride downtown with our host, Jean, and then headed for Santa Fe Depot – aka Coaster departure point.

The station itself is classed as an Historic American Building and sadly it sits in the shadows of a large number of high rise tower blocks.  Built in 1915 for the Panama-California International Exposition which celebrated the completion of the Panama Canal.  There are 16 bronze and glass chandeliers and the oak benches in the waiting room are also an original feature. The chandeliers have the Santa Fe Cross on each one even though this line was never linked to Santa Fe in New Mexico due to the impassable terrain. The whole Depot felt like a reminder of a bygone era of steam trains and streetcars. We loved it.

Half an hour later our Coaster arrived and we chose top deck seats on the ocean side of the train.  The train was spotless, comfortable and more or less empty.  The first half an hour or so took us up through the outskirts of the city and Mission Bay (where Jon spent some time aged 15 on a school exchange).  Then we arrived at our first beach stop of Solana Beach which is where it becomes more of a coast hugging journey.  Slightly worrying that this massive loco and 6 or 7 carriages were on the top of a sand bank with the Pacific Ocean lapping at it’s foundations. Best tactic – look out to sea. It was at this point that Jon reminded me that only a few months ago we were swimming on the other side of this vast Ocean.  I think we must have come the long way round!

The Coaster arrived dead on time at the last stop, Oceanside.  From here there are connections to Los Angeles and right up the west coast but for us this was the end of the line.

The Pier was only a 5 minute walk away – so we strolled along the prom prom prom and watched the few surfers and few more fishermen.  The pier is the fifth version to try and withhold the sea and still (I think) the longest on the west coast.

On the beach the waves made the water look less clear but at the end of the pier the ocean was clearest blue and very tempting just to jump off the edge.  Many signs advised against this but the Tsunami Evacuation chart probably took most prominence on the noticeboard.

Tummies were starting to rumble so we headed north up the beach towards the harbour.  My trusty leaflet said that there was a Cape Cod style harbour further along.  We paddled in the strong currents and people watched for a while before taking a short cut through a beautiful holiday resort to the harbour.  We must have hit the resort totally out of season.  There were so many lifeguard viewing platforms along the beach but only two were manned.  It must be a pretty busy place come the summer months.

The harbour was picturesque with lots of little restaurants, bars a shops.  We started to look at menus but our minds were made up with we saw fish and chips.  It just had to be (although Joe’s Crab Shack was a close runner up). Jon ordered while I located a shady table away from the very hungry looking, very huge gulls that had also obviously arrived for lunch.  Jon found the ordering a bit surreal.  He ordered a medium fish and chip basket for himself and a small one for me.  It was then that he was asked if he wanted salad or fries with that.  Call us stupid Brits but aren’t chips fries? Or are chips crisps? Whatever it was called it was all delicious and, following our pathetic illnesses, our appetite returned at just the right time.

We took a long stroll back to the beach for more gazing out to sea before heading back for the last train (and a walnut ice-cream which we managed to squeeze in on top of the fish and chips, fries, crisps, whatever……) 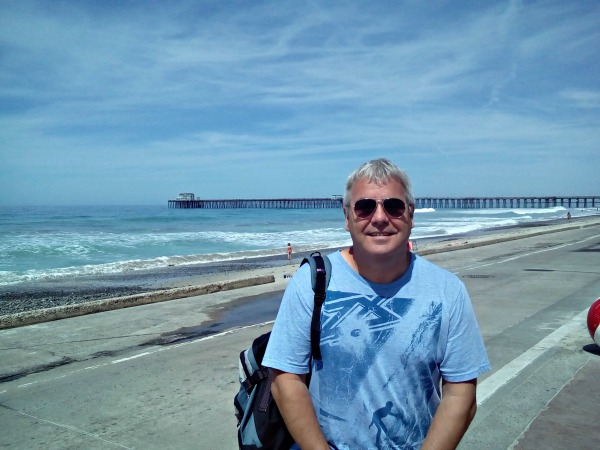 It is true to say that the simple things in life make us jwalkers happiest. It was the simplest of days in the grand scheme of things. No canyons, amazing drives, cocktails, crazy people but we both just had that warm glow of a perfect day out together. Time to hit the garden chairs, close our eyes and store those California sunshine coast memories.  Not a bee or bonnet in sight.