“On the Town” in New York

One much appreciated lift to the Metra Station in Wheaton from Ray before he had to take up tram driving duties at Cantigny.  Thanks Chris and Ray for a brilliant stay.  We felt rested and ready to hit the Big Apple.

Where did this name come from you may wonder?  It has nothing to do with New York state being the 2nd largest apple/fruit producer in the USA it has more to do with horseracing.  In the 20s, African-American stable hands from New Orleans said they were going to “the big apple” because the tracks were big-time venues.  In a weird twist, in 1673 long before New York was named the Big Apple it was know briefly as New Orange.  The Dutch captured New York from the English and called it New Orange in honour of their King William III of Orange.  When the city was taken back by the English it went back to it’s original name.  Not a lot of people know that but now you do.

Whilst waiting patiently at our gate at O’Hare Airport to board a tiny United Airline plane (so tiny in fact that the seat cushions converted to life jackets), we were amazed by the wheeling and dealing that goes on at the gate.  Most flights appear to be overbooked so the staff are happy to buy tickets back and put you on the next flight.  The lady we saw got $75 for doing this.  The only catch is that she was on standby for the next flight not a guaranteed seat.  If time is not an issue, it seems a good way to travel and make money! We were tempted but wanted to travel through New York in daylight to find our next Airbnb so stuck with our 1pm departure.  Our flight path to La Guardia took us over the Upper Bay at the southern end of Manhattan. Our first glimpse of NYC.

A short busy bus ride and a 10 minute walk was all it took to arrive at Arun and Amy’s 2nd floor apartment.  We had a huge room at the rear of the property so it was nice and quiet.  Astoria is a great area with lots of cafes, delis, restaurants and an abundance of dangerous bagel shops. After a quick shopping trip and some delicious pizza, it was time to study the map, get a rough route for the next day’s sightseeing and get some sleep.  We had a vague idea of what we wanted to see but needed to sort out logistics.  Some tourists would be horrified at what we excluded from the list but this is land sailing JWalking style.

Top of the list!  It is such an iconic place and it was the first stop our subway passed.  We entered at the south east corner and there was a charity run taking place so we met lots of hot sweaty men and women finishing (at 9am!).  If only we had know! The park dilates up and down through archways (a nod to Home Alone and the pigeon lady) and has a lot of large boulders to climb on which surprised us.

The paths are endless and twist and turn so you lose all sense of direction quite quickly.  We meandered north and walked through an avenue of traditional statues of literary greats.  Among them were Robbie Burns, Walter Scott and Shakespeare.  As we neared the boating lake the statues changed to more informal less posed ones of Hans Christian Andersen and Lewis Carol’s Alice in Wonderland. 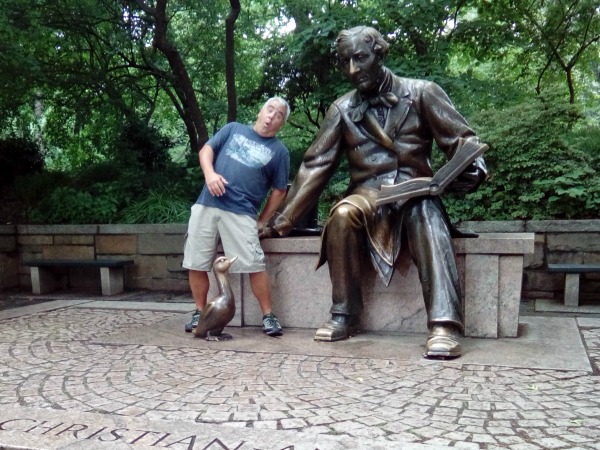 Heavy rain had been forecast so while it was dry and the park was relatively quiet we stopped for a coffee at the boathouse. Good job we did because half an hour later the rain started and it was serious rain.  The city looked really eerie in the rain.  Most of the tower blocks surrounding the park looked like they had had the middle chopped out. 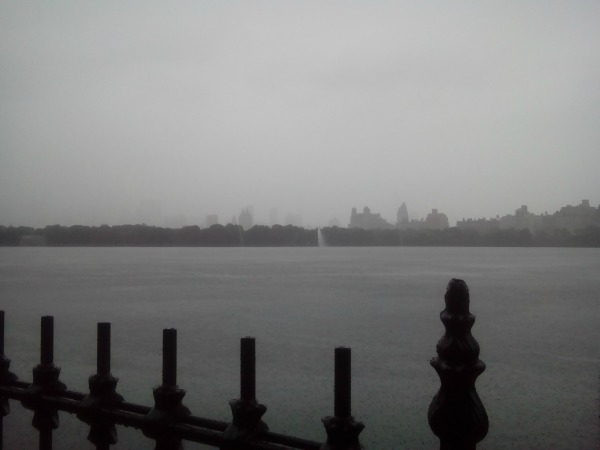 We had macs and a brolly but they were no measure for the onslaught.  We hid under a tree of a while then made a dash for the tennis courts where it looked like there was an old pavilion.  It was great. It was a very old building that desperately needed some TLC but it had a terrace facing the, now flooded, tennis courts and, even better, it was dry!

We perched on a bench to eat the damp sandwiches and had the place to ourselves apart from Norman Djokovic. Now Norman was dressed head to toe in top notch expensive tennis gear which included a helmet for some reason (similar to one for cycling). Tennis head injury perhaps? He put 5 rackets on the table and started vigorously doing mock serves, backhands and smashes with them.  Not a ball, tennis court or bottle of Robinsons squash in the vicinity.

He continued for about 20 minutes or so and told us his evaluation of each racket.  He seemed willing to spend a shed load of money on the back of his mock game.  We were so spellbound we hadn’t noticed the rain had eased up.  As soon as we realised it had, we escaped and continued to head north past North Meadow, Belvedere Castle, The Great Hill and finally to the Lasker Rink and Pool.

It is such a great park for the people of New York.  We walked the full 5 miles from the southern entrance to the north but sadly we didn’t get to see the famous skating rink featured in both Love Story and Serendipity.  Our winding path wounded us the wrong way and a 5 mile return loop with the threat of rain meant that we moved onto number 2 on our list.

A short subway ride and walk past the Post Office took us to the High Line Walkway.  The Post Office was not just a desk in the corner shop! 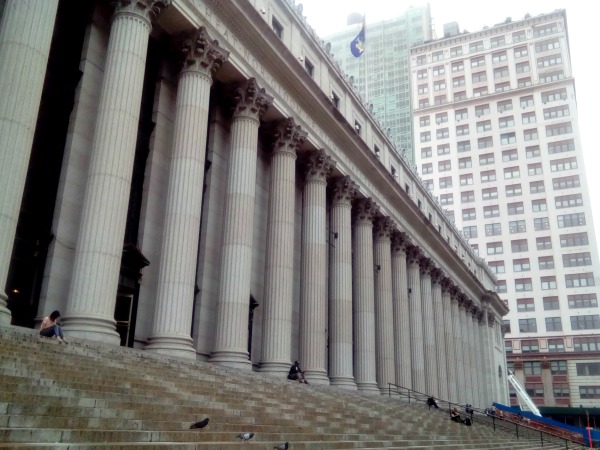 Jon had read about this walkway.  Originally it was an elevated freight train route from lower Manhattan meatpacking area that opened in 1934.  After years of service, in 1980 the line was closed and it fell into disrepair and was due to be torn down but two local residents got together a petition to save the structure.  It is now a 1.5 mile walkway that has been planted with trees, shrubs and flowers among the original tracks. 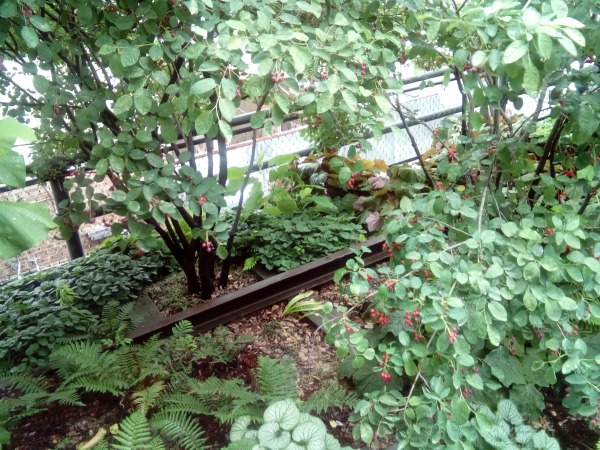 To walk above the streets through all this greenery was great and even better there were no STOP DON’T WALK signs to wait at every block.  There were a few art displays and sculptures along the way and luckily the rain held off.

We decided that our return route should be up the edge of the Hudson River so walked back the length of the High Line but this time at ground level on the river’s edge.  It seems that in this part of New York the piers have seen better days but it was interesting to look back through the skyscrapers to try and catch a glimpse of the walkway we had been on.

As we neared 42nd street we saw a large Norwegian Cruises liner departing.  All the passengers were on deck for the big departure.  We also had our “On the Town” moment when we saw the USS Intrepid aircraft carrier  which is now a museum.  Despite ever blackening skies – still no rain!

We were on a roll! About 6 blocks up 42nd street away from the river is Times Square which we thought would look bright under the dark skies.  The neon lights started within about 2 blocks of the actual square and we were a bit bedazzled by it all. Every show in Christendom seemed to be advertised as well as every product you could ever need (or not need). 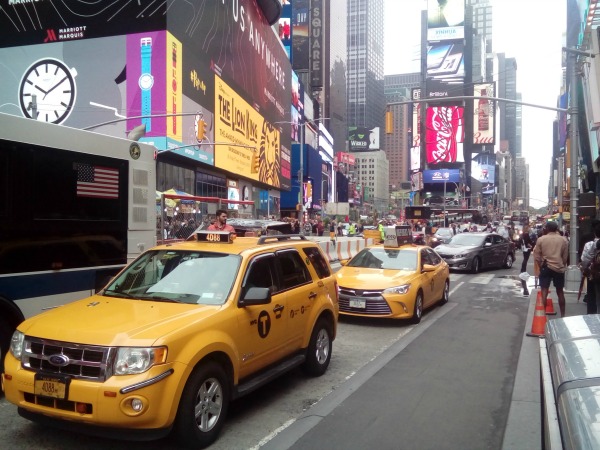 I spied an interesting building with no neon on a side street and headed for that.  I did take some photos but was side-tracked by a Back to the Future Delorean replica parked by the kerb.  A guy had bought it and pimped it to get tips for being able to take a photo.  A bit of subtle photography got a free shot or two!

There was no stopping us now! We were within reach of Grand Central Station so decided to push our luck one last time with the weather and make one last stop.  We passed through Bryant Park, a street market and New York Public Library.  All of which were very picturesque and full of people enjoying the weekend.

WOW! It make Chicago and Denver look like a Mickey Mouse affair.  I will let the pictures do the talking 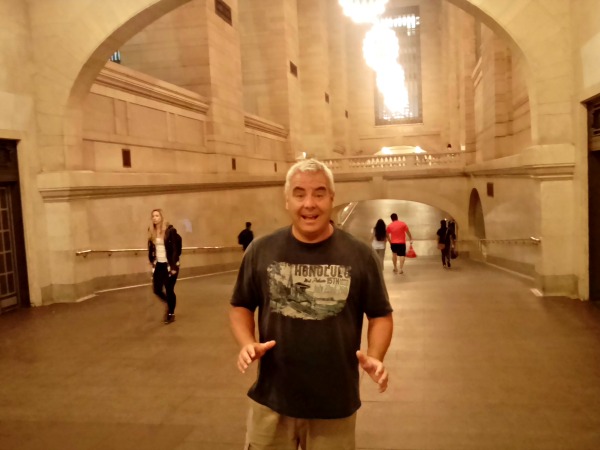 The legs were beginning to let us know it was time to head home.  We emerged from the subway to torrential rain but we didn’t care much as we were on the home straight and felt so lucky to have had the majority of the day rain free. Jon calculated our route at around 11 miles and we felt smug about how much we saw to get a real flavour of the city. All I can say is that our vagabond shoes were longing to stray right through the very heart of it, NEW YORK NEW YORK!