Sorry but I lied about my last post being the Last Tango in Halifax.  The weather was incredibly kind to us so we managed a couple of last minute outings before being homeward  bound. More on that below. Because of the general vastness of the Provinces in Canada, we hadn’t realised that the first leg of our three stage journey back to the UK would involve flying over four Canadian provinces (Nova Scotia, New Foundland, Quebec and Ontario) and two US States (Maine and New York).  For fear of sounding incredibly sad, I am a little reluctant to admit that I follow the little aircraft icon on the in-flight screen. The route seemed to jig around a bit or maybe our lovely Air Canada pilot was taking the scenic route. Who knows? The flight plan map is my alternative to finding a film that I hardly have time to watch. Jon, however, spends the last ten minutes of most flights just hoping that they don’t make any announcements that block the screen so he can see the end of his film. Add in the pressure of actually finding a film you like and it makes the little aircraft icon cruising along seem a much calmer alternative. Relaxing or weird? I will let you decide.

End of a journey

From our visits to various museums in the area, we knew that Halifax in the early 1900s had a fairly tragic place in history.  Firstly with the ominous task of searching for victims of the Titanic sinking in 1912, followed only five years later by the Halifax Explosion. So we decided to head a little further inland towards the large basin, Bedford Basin.

The plan was to have a long jwalk and visit the memorial to the Halifax Explosion which was in Fort Needham Memorial Park which was close to the Fairview Lawn Cemetery and The Hydrostone area of the city.  The cemetery is non-denominational and over 100 of the victims recovered from the Titanic are buried. It all sounds very macabre but the story, even before “The” film has always fascinated me.  The possible conspiracy theories of it being the sister ship Olympic that really sank as part of an insurance scam, the tragic sequence and combination of events and miscommunication that resulted in so many being lost, the injustices of the class system of the time that sealed the fate of so many and so on.  Unwittingly in our travels over the years, we have in the past visited the museum in Southampton where Titanic started her voyage and seen the former White Star Line offices, visited the pier in New York where the survivors disembarked and seen where the ships departed and returned in Halifax to recover victims. It somehow seemed like a good way of leaving the rest to history by visiting the graves.

Tellingly, over a third of the headstones had just the date of the sinking and the body number, others had both of these plus a name, if known.

Finally, there were some with more ornate headstones with ages of the victim and messages from families. But overall, we were relieved to see, that the area is very understated and respectful. The final headstone we saw was the one for the little two year old whose leather shoes we had seen in the Museum a few days before. 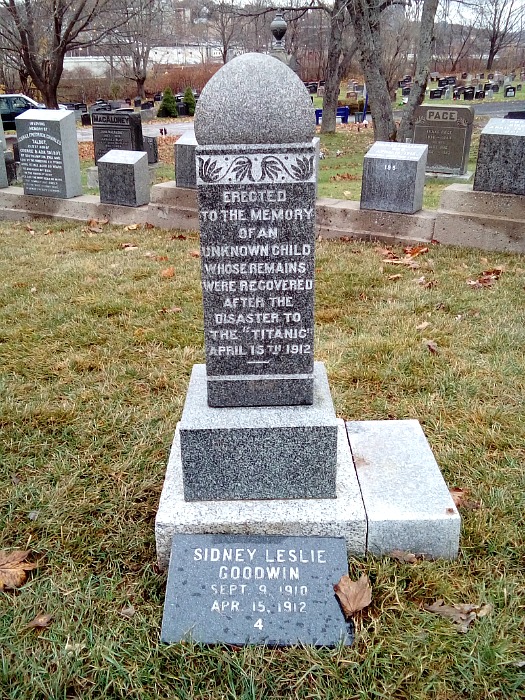 For Titanic film trivia buffs, there is a grave marked “J Dawson” which many film-goers have left flowers at over the years. Recent research has revealed that the grave belongs to a Joseph Dawson who worked in the boiler room. The film’s director has also said since that the character in the film was not inspired or connected in any way to him.

On our way through the footpaths in the cemetery there were a large number of graves from the Halifax Explosion. In fact, sadly, whole families together.  There was even a large memorial to the crew members of a British cargo ship that was at an adjacent pier when the explosion happened. There were no survivors. 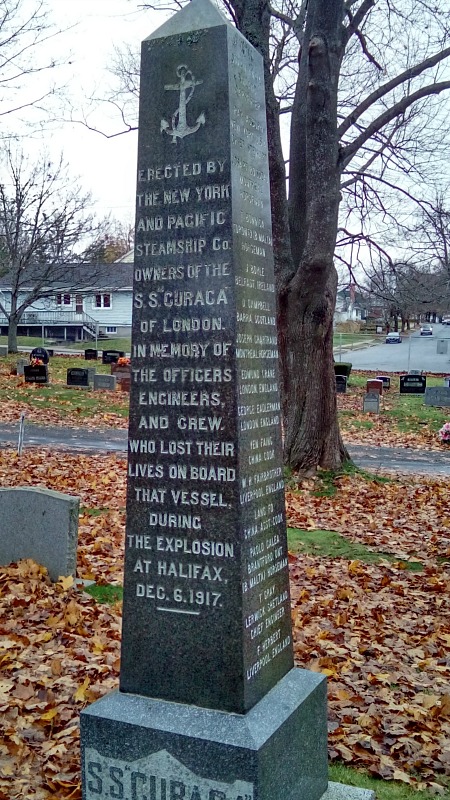 On our way back we passed through this neighbourhood of ten short parallel streets at the north end of the Halifax peninsula which was rebuilt after the explosion.

A number of names were put forward as to what to call the newly built area and The Hydrostone was decided upon. It is the name of the non-combustible concrete blocks that were used to build the houses.  They look a bit like breeze blocks and after the fate of the former wooden houses it was seen as a safer option.  Some of the houses have now been converted into chic shops and cafes and the area has a nice feel with it’s broad tree lined boulevards. 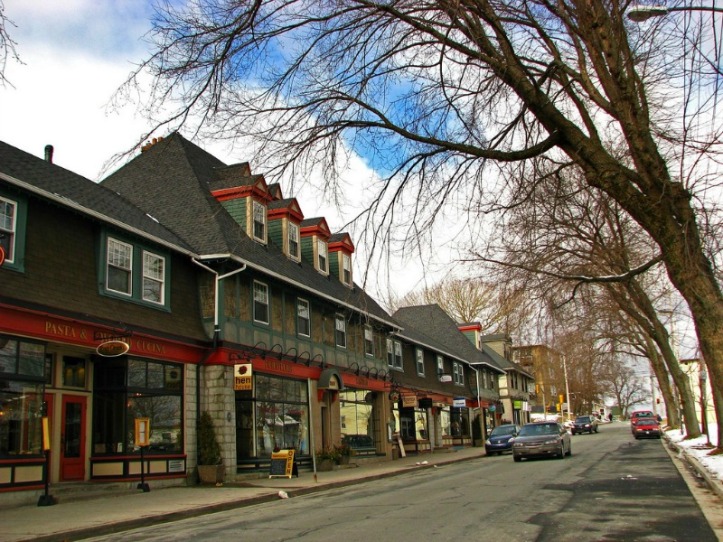 The memorial which is a bell tower in Fort Needham Memorial Park was a bit bleak looking.  It looks as if it has been made of the similar concrete blocks to the houses but without the normal windows and doors to personalise it, it looks very cold and bare.

After one more sentimental trip on the ferry, the purchase of some Nova Scotia t-shirts and a slap up meal, it was time to head to the airport, or I should say the field with a terminal which occasionally has planes arrive.

Jon and I are already feeling very sentimental about leaving Canada and keep saying things like, “This is our last internal flight”, “This time next week we will be back in the UK” and the one never far from Jon’s lips, “Last chance to buy a ……. T shirt”.

The bus, plane, train and subway journey all went well and we are in Toronto for a couple of days before heading back for a long awaited reunion with our very understanding family. Maybe by then we will be having hypothetical chats such as, “I wonder how much property is in Nova Scotia”. If the Virgin Atlantic flight next Tuesday is missing two passengers you know why! Of course it could also be because of this headline we saw. We can’t cope – Brexit, a new Prime Minister and now this!