King Richard and the Lady Jacqueline

Whilst in Leicestershire, our friends planned for us to visit Leicester city centre to take in a bit of history. Since we lived in that county around 22 years ago, the city has found fame and glory through the discovery of the remains of King Richard III. First question…… Was Richard III a visionary or an ambitious murdering tyrant? Second question……. Who is the Lady Jacqueline? Third question ……..Was he really found in a car park?  But I am jumping ahead a bit, so before I get on my historical high horse, I should start at the beginning

After a hearty cooked breakfast at the Evans residence, we headed for the centre of Leicester. The plan being to walk through to the Richard III Visitor Centre. Apart from a massive shopping mall, there seemed to have been a lot of sympathetic restoration taking place in and around the historic buildings in the High Cross area. First stop was the Guildhall. Some parts of this building date back to 1390 and it is said that William Shakespeare performed in front of Queen Elizabeth I in the building. It has a varied history but is now a museum and event venue with the added bonus of a coffee shop and friendly ghosts. You could easily walk by and not even realise it was open. It was free to enter and wander round with a voluntary donation box at the exit. 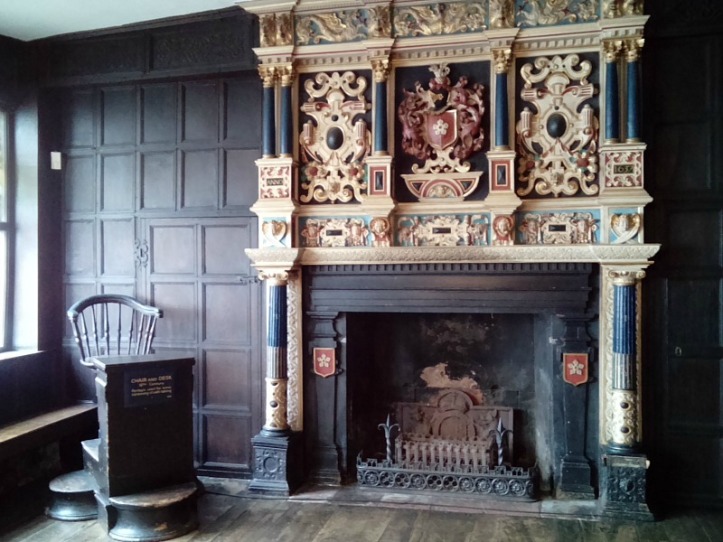 Right next to the Guildhall is the Cathedral Church of St Martin, but usually know as Leicester Cathedral. There has been a church on this site for over 1000 years and we happened to have one of the bell ringers in midst. Our friend Trevor was a bit of a campanologist in the day!

The reinterment of Richard IIIs remains in the Cathedral in 2015 required some alterations to the layout of the choir stalls and pews. It was refreshing to see that the mix of modern and traditional decor seemed to work. Mobile choir stalls and chairs rather than pews which could be rearranged for various uses all made it feel a usable community space. We weren’t too sure about the very modern Bishop’s chair though!

There were a few display cabinets with items used for the reinterment ceremony, all of which looked fit for a King.

The tomb itself is quite plain and simple on a black plinth bearing his name and coat of arms. Loving a fact as I do. My one about the tomb is that the English oak coffin that Richard III has been laid to rest in was crafted by Michael Ibsen. The same Michael Ibsen whose DNA was used to identify the remains. He is a direct descendant of Anne of York (Richard IIIs sister).

The Visitor Centre is only a few metres from the Cathedral and at a cost of £8.95 each is very good value, especially as the ticket is valid for 12 months. The Visitor Centre does a very good job of putting together the facts and leaving you to make up your own mind about this controversial King. History and authors have portrayed him as an evil hunchback caricature. He did have curvature of the spine which was helpful in identify the remains prior to the more accurate DNA analysis. But did he have a hand a the murder of the Princes’ in the Tower? Did he help the poor? Did he murder his wife, Anne Neville? Did he outlaw crooked members of the clergy? We will never know but one thing is not disputed and that is that he fought bravely in his final battle in Bosworth, even when he realised he had been betrayed by some of his supporters. My own opinion is that whether he was good, bad or just a reflection of unstable times, a once King of England’s remains should be buried in keeping with their royalty. That has now been done.

Question 2 – Who was the Lady Jacqueline?

This mystery lady is not one of Richard IIIs mistresses but it is our lovely friend Jackie. She would be the Jackie who planned the day, printed out extensive literature on our excursion and brought us to an almost fever pitch of excitement in the dressing up corner! 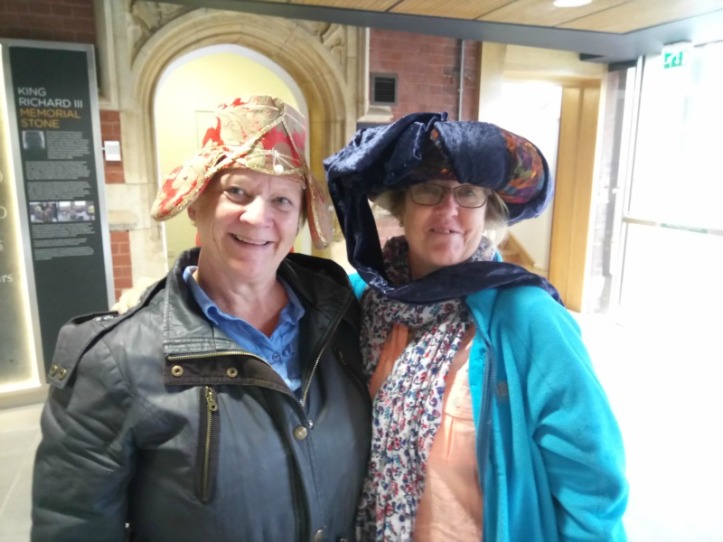 Question 3 – Was Richard found under a car park?

This part of the whole discovery story makes me angry. The media have had a bit of a field day with this one. Shame on you! The facts are that after losing the Battle of Bosworth in 1485 Richard’s corpse was brought to a church in Leicester and then he was laid to rest by the Grey Friars in their Friary. In 1538, Henry VIII dissolved the monasteries and the Friary, along with Richard’s remains were flattened. Over the years various buildings were built around this site leaving a small quadrangle in the centre, adjacent to a school, which was used for the parking of a few cars. In 2012, to coincide with the 527th anniversary of his death a dig began to find the remains and, as they say, the rest is history. My gripe is that the media made it sound like the council had knowingly built a multi storey car park on the site and had somehow been disrespectful. Why not say the remains were found in an archaeological dig of Grey Friars Friary? Rant over!

We all agreed that the Visitor Centre was well laid out and an impressive building itself, being a former grammar school dating back to 1784. As you exit the last gallery is a very low key stone gallery with a glass floor over the actual dig site where the remains were found.

A bit of a Walk

Just to round off our day out we completed part of the Richard III Walking Trail. It took in sights such as the Newarke, an early borough of Leicester, the castle and some of the city walls. We were all a bit on information overload so it was a good job we had one of Lady Jackie’s printed maps.

What a great day out! Thank you so much Lady Jackie and Sir Trevor for sharing your weekend with us and helping us get to know a little more about Richard III. Although you could have spared me the rhyming slang bit!