Most people would be horrified at getting a 5.30am wake-up call on their holiday but, for us, it meant the welcome start to another day exploring in this fascinating country. The itinerary for today was a mixture of ancient Egypt, modern technology, a dubious perfumery, a visit to the bustling market in Aswan and finished off with some Nubian dancing. What’s not to like?

When we originally saw this on the list of visits we didn’t really know the details. Was it an obelisk that had unfinished inscriptions? In fact it was far more interesting. The coach dropped us off at a quarry not far from the Nile in Aswan.  A lot of the stone for the temples of Egypt came from quarries in this area. From ground level it was hard to get a concept of where the obelisk was but after following a path up towards the top of the quarry we could see a huge, and when I say huge I mean HUGE, obelisk cut from the bedrock laying as if the stonemasons had just walked away from it. It is the largest known ancient obelisk in Egypt and was cut for the second female pharaoh called Hatshepsut (1508-1458 BC) to commemorate her 16th year as Pharaoh.

Once finished it would have measured around 42 metres and weighed nearly 1200 tons but during its preparation cracks began to appear in the granite and the project was abandoned. It is still attached to the bedrock with the marks of the workmen’s tools clearly visible. What I cannot believe is how they managed to move one lump of stone this huge.

Despite our guide, Nabil going to lengths to tell me how it would have been loaded onto a barge in the dry season and then moved when the flood season arrived. Really? It is too much for my small brain to comprehend. It was great to visit this location bright and early because there was no shade and by the time we were leaving 8.30am ish most people were hunting out any shady corners. 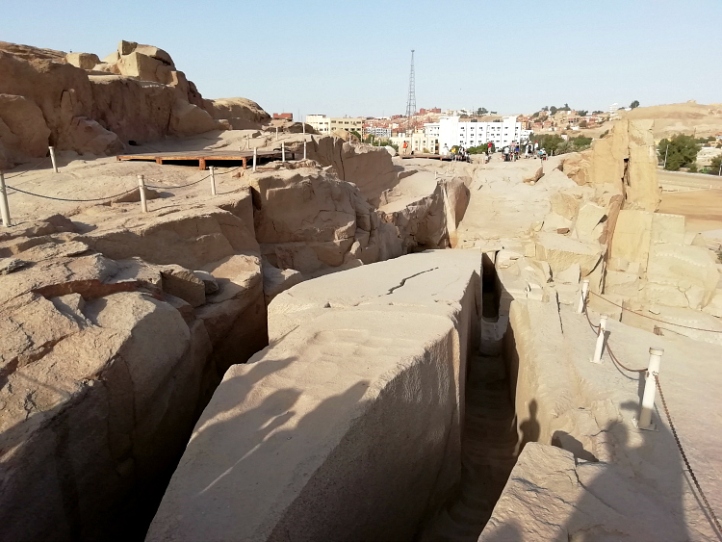 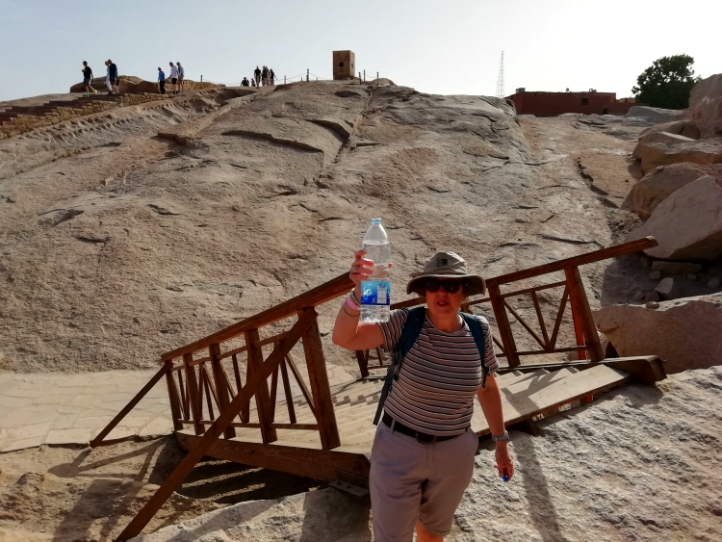 A short drive past the ever present armoured vehicles and checkpoints brought us to the Aswan High Dam. We had already seen the much older Lower Dam when we had visited the Philae Temple but this one was built in the 50s/60s and is somewhat controversial for a couple of reasons. There were question marks over whether it was environmentally friendly. Changing the flow of the Nile badly affected the silt levels and wildlife.

Then there was the slight problem of resettling 120,000 people. Unfortunately they were relocated in poorly built houses, miles away from their historic homeland. Perhaps the most complicated was avoiding the loss of 22 monuments threatened by flooding from Lake Nasser. A massive UNESCO project saved the temples by dismantling them stone by stone and rebuilding them on higher ground. These included the Abu Simbel Temple and Philae Temples which were on our tour.

The High Dam itself was fairly underwhelming. It serves it’s purpose for hydro electricity no doubt but I am afraid it was dull in comparison to the historic locations we had seen. The only fact I remember after the visit is that there are crocodiles in the Nile south of the dam but not north – that is unless someone who lives north of the dam lets a pet one that gets too big go.

No day out would be complete without a hard sell to make you spend some cash. Today’s trip was no different. This time it was to a perfumery. We entered the large premises and were invited to watch a man in a little cubicle doing some glass blowing to make the perfume bottles. The poor guy seemed to be locked in his little booth like a performing monkey. As soon as the tourists turn up, hey presto on goes the Bunsen burner and it’s showtime. 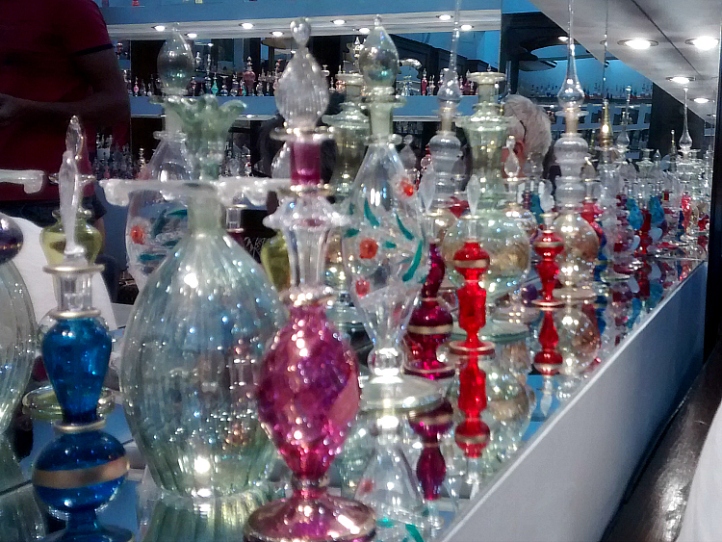 No such thing as protective goggles, apron or gloves. On closer inspection his eyes looked glazed over – I even had the crazy notion that he was blind but that would be impossible. Once we had all duly clapped his performance we were taken to a large lounge area for a welcome drink and given various bottles to smell. All of which were alleged to be essences used as the basis for all the top brands of perfume. The guy asked people to shout out their favourite brands and he duly arrived with “the essence” of that perfume or aftershave that miraculously smelt identical but with the promise that it would not fade in strength over x amount of years.

After he had overloaded our senses with smells, those wishing to buy headed off to discuss and finalise purchases. If you bought 4 small bottles you only paid for 3 but they came in at around £30 per 100ml. Granted this is much cheaper than the actual brands but alarm bells rang in my head when they said that they shrink wrap both the bottles and the presentation box they come in for easy, safe transportation back to the UK in suitcases. Several members of our party did buy bottles as gifts and a pretty penny changed hands.

The next day, however, I did hear one of our group complaining to our guide that she opened the bottles and they didn’t smell of anything at all. Not a whiff of strong essence in any one of them. So what did they put in the bottles? It seems many a tourist has added reviews on Trip Advisor about this place so “buyer beware“. I suppose their theory is that by the time you open the bottles in the UK they will be laughing all the way to the Egyptian bank.

Day three of our Nile Cruise was finished off with a visit from a group of Nubian dancers. Like me you may not have heard of Nubians before.  They are descendants of an ancient African civilization who ruled Egypt. Their historical homeland, often referred to a Nubia, stretches along the Nile through southern Egypt and northern Sudan most of which was submerged following the building of the High Dam.

The Nubians speak a variety of Nubian languages depending on their location. Apart from those living near the Nile there are several groups of Hill Nubians living in the Nuba mountains in Sudan. We are not sure which Nubians we had on our boat for the evening but they had some sort of pantomime horse with them and a whirling dervish. It seemed like mayhem but very entertaining. A few brave souls joined in the dancing but that horse had a strange look in his eye so we kept our distance. You can never trust a Nubian dressed as a horse! 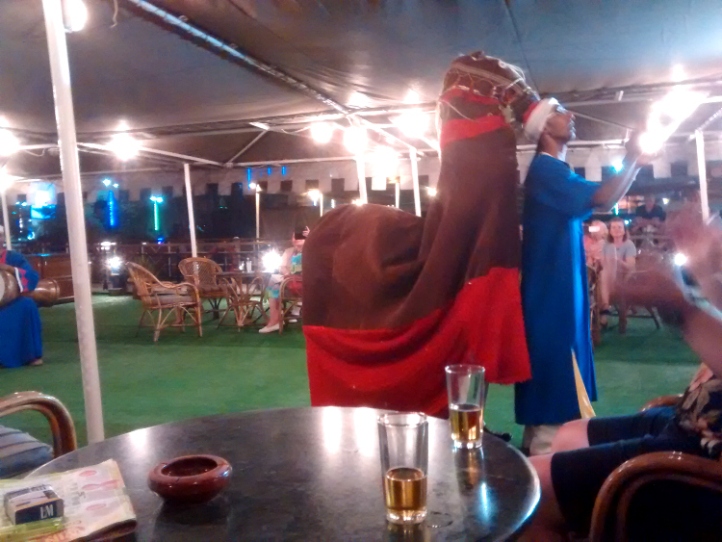