Over The Swellies to “Mam Cymru” 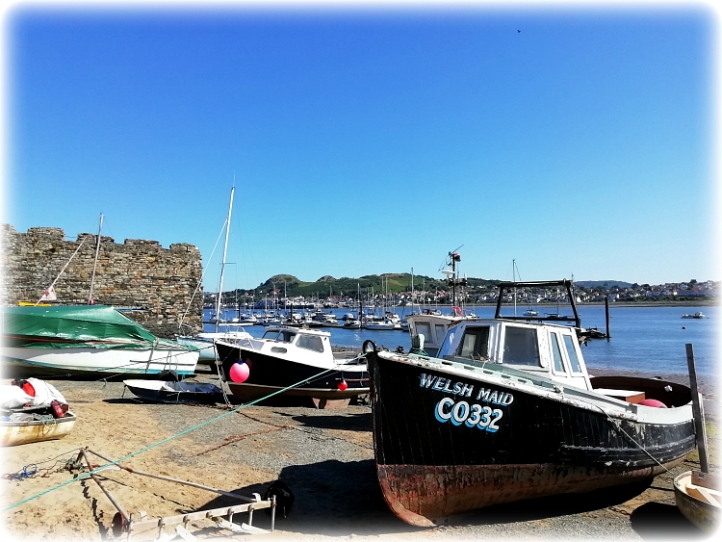 Bit of an explanation needed I think. You will have to read on for The Swellies bit but Mam Cymru (Mother of Wales) is how Anglesey was known in the middle ages. So far on our trip we had not overheard any Welsh language speakers but we were hoping that would change as we drove further from the English border. The other title option was “Three Islands, Two Castles, Two Bridges, A Causeway, A Sunny Beach,The Longest Village Name and a Tiny House“. Simply rolls off the tongue! Today was to be our first taste of Welsh castles. We had seen our fair share of English ones on our recent Northumberland road trip but there were plenty more in store for us on this side of the country.

Within minutes of leaving our lovely “Garden Room” Airbnb in Llandudno Junction we had a fantastic view from Deganwy across the River Conwy to the castle. Built by Edward I late in the 13th century it makes an impressive sight as you approach over the bridge spanning the estuary. Edward was the consummate castle builder in Wales and we would be visiting as many as we could during our short time in North Wales. 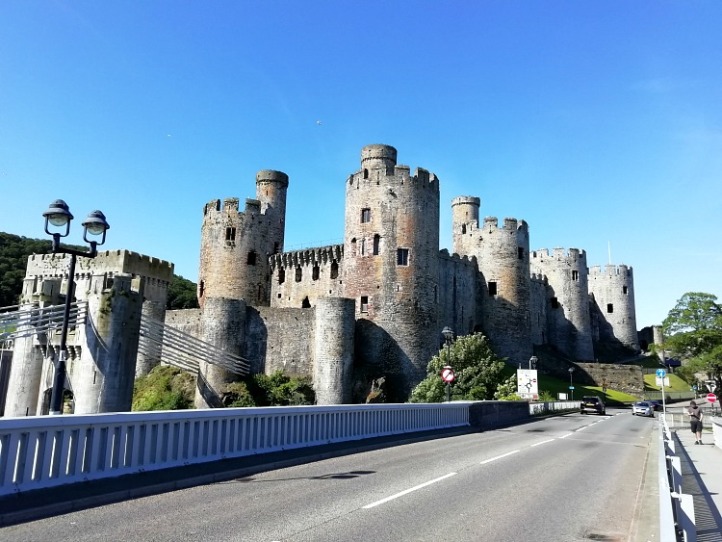 Before arriving we knew we wanted to walk the walls of the town. We found some free parking and walked along the harbour front before finding the nearest access point to the walls. On the way we passed the smallest house in Great Britain. Owned for and lived in for over 200 years by the Jones family, it only has two rooms and is just 6ft wide. You can now have a guided tour of the house which doesn’t take long!! 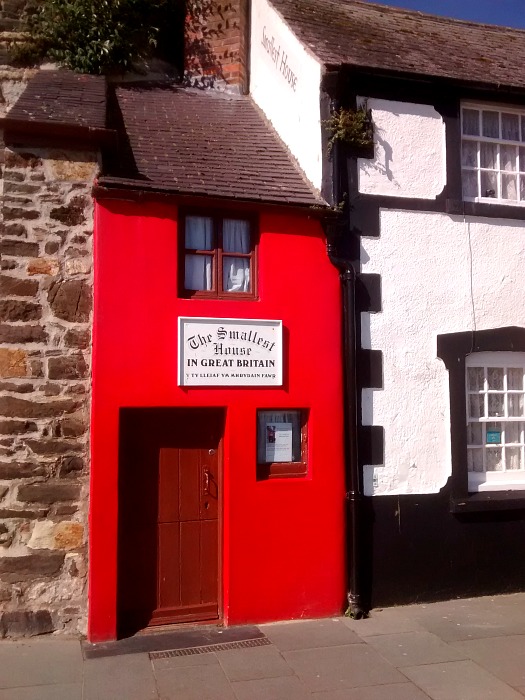 A little further on we found steps up to the wall. The walls are 1.3 km long and have 21 towers and three gatehouses. It is possible to complete the full circuit apart from one or two places where it is structurally unsafe to do so and it was refreshing to see that they are open to the public despite a few places where use of the handrails was a good option as we were above the rooftops of the town. It is remarkable that they are in such good condition and give a fantastic view back across the river to Deganwy and of the walled town below. There were a good few places to take refreshment along the route and a great new visitor centre for the castle. 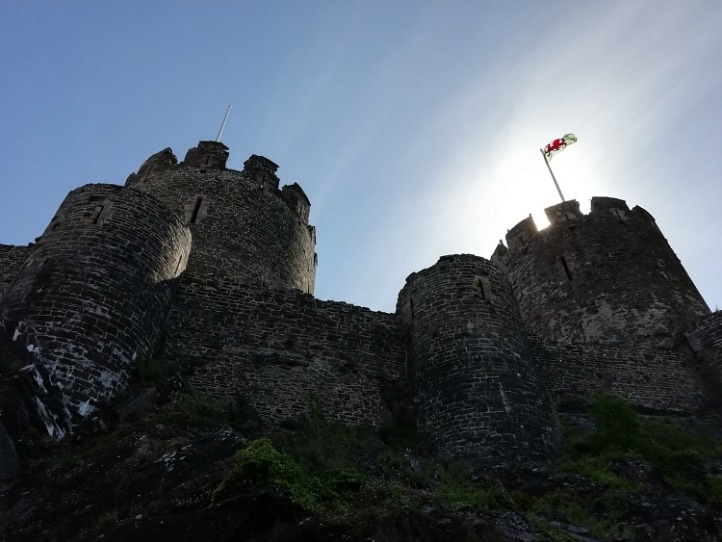 Our next hop, skip and jump would be over to Anglesey. This island off the north coast of Wales is linked to the main land by the Menai Suspension Bridge and the more recent Britannia Bridge. Jonno being ex-RAF we always associate Anglesey with RAF Valley, a fast jet training and air search and rescue base. Most famously where Prince William was based for part of his military career. Our plan was to drive for the hour or so up to Holy Island, so called because of the number of standing stones and religious sites on the island. It is joined to Anglesey by a causeway on the main A road, the Stanley Embankment, and a bridge, Four Mile Bridge on the older B road. The A road has been majorly upgraded for easy access to the port of Holyhead which is the main ferry terminal to Ireland for passengers and freight, although we saw very little traffic.

Anglesey also has a very well know claim to fame. It has the village with the longest place name in Britain: Llanfairpwllgwyngyllgogerychwyrndrobwllllantysiliogogogoch. The name, when translated into English, means “The church of St. Mary in a hollow of white hazel near a rapid whirlpool and near St. Tysilio’s church by the red cave” but locally is known as Llanfairpwll or Llanfair P.G.

This would be our third island in one day. First Anglesey, then Holy Island and now South Stack. The tiny island is really just a rock for the South Stack lighthouse. It is a very dramatic setting and for the first 17 years of it’s operation was only accessed by a basket on a hemp cable. Not for the fainthearted. Nowadays you can walk down almost 400 steps and cross on a bridge to the lighthouse. 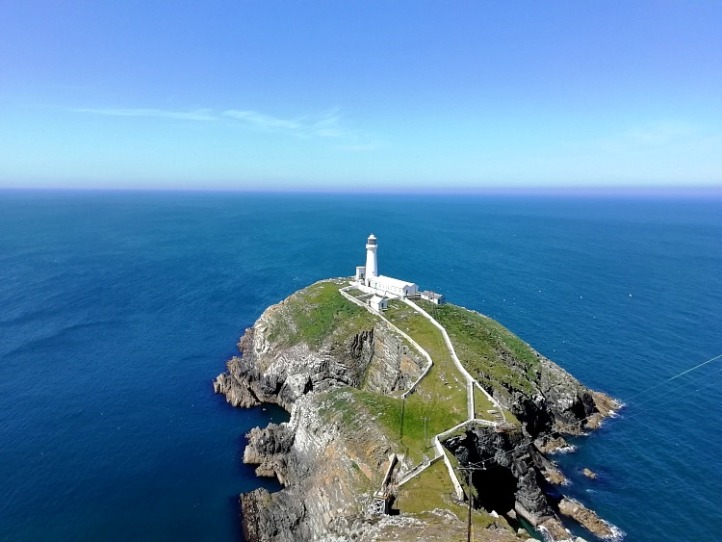 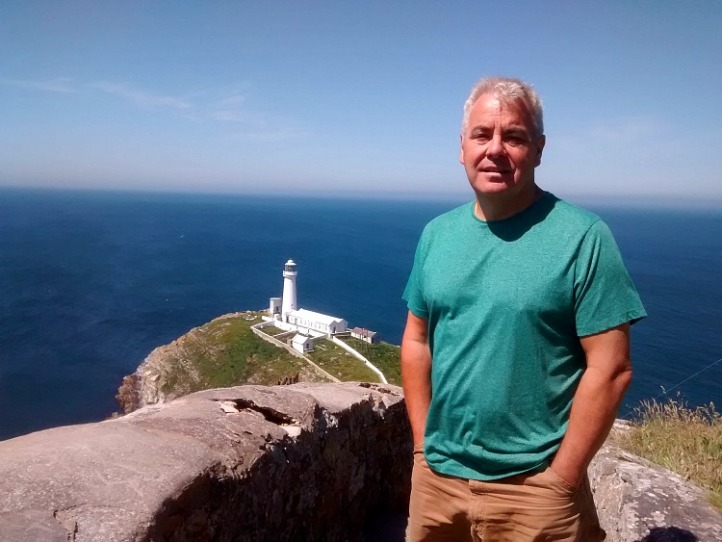 Thousands flock every year to see the nesting seabirds all along the cliff towards Elin’s Tower, formerly a summerhouse for a local family it is now an RSPB Information Centre, shop and cafe. The weather was fabulous so we had a long walk along the cliffs just gazing out to sea and marvelling at what a great coastline we have in Britain. 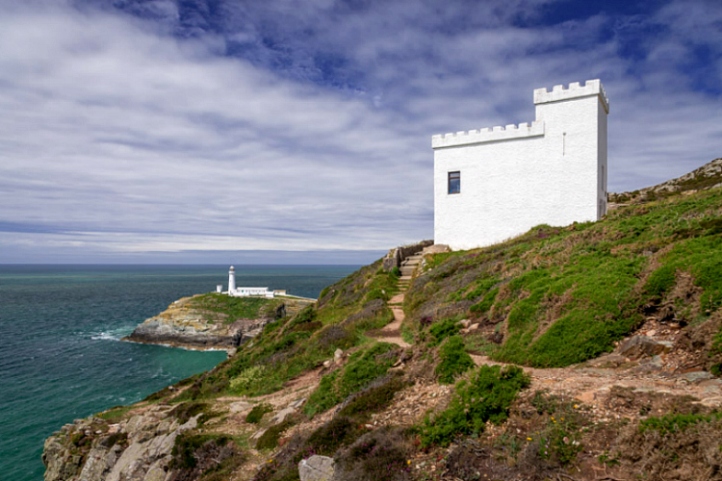 With so many good things to see, we forgot that we had a picnic warming up nicely in the car so the next stop was just the place to tuck in. A beautiful little bay called Trearrddur Bay which is still on Holy Island. Golden sand and shallow blue water must make it a hot spot for families in the summer. We sat and munched while people watching and deciding who had the best sandcastles. A perfect spot. 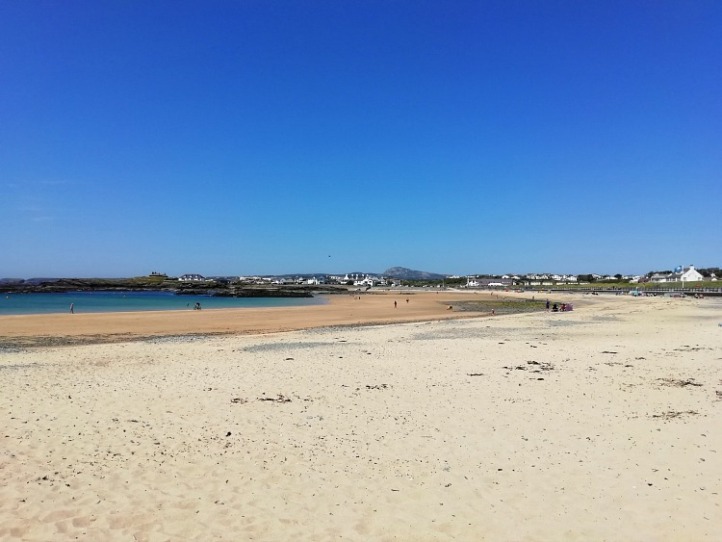 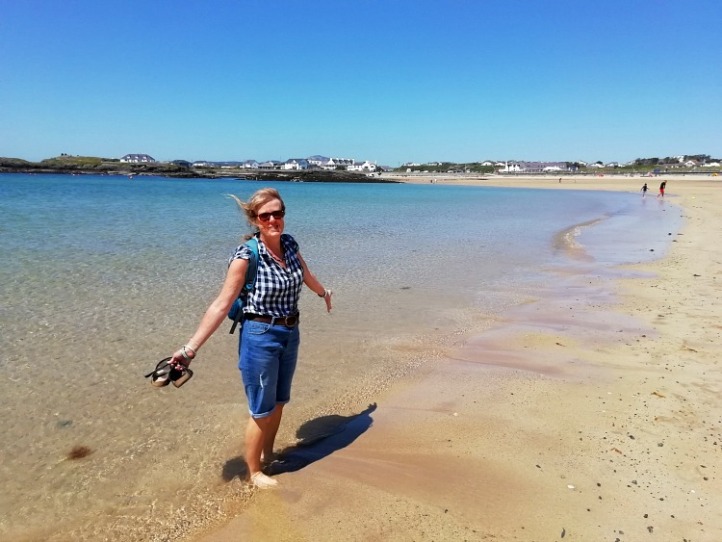 There was so much more to Anglesey that we had thought and probably should have planned longer than a day exploring but we couldn’t leave without visiting another of Edward I’s impressive castles. This time it was Beaumaris.

Beaumaris was originally the main town on Anglesey and had a big shipbuilding industry, now long gone. It sits across the narrow tidal channel between mainland Wales and Anglesey and there are good views back to the moody mountains of the Snowdonia National Park.  The castle was not as impressive as Conwy but we liked Beaumaris although we couldn’t locate a much needed decent coffee stop. Unheard of in this day and age. Back to the mainland it was then! 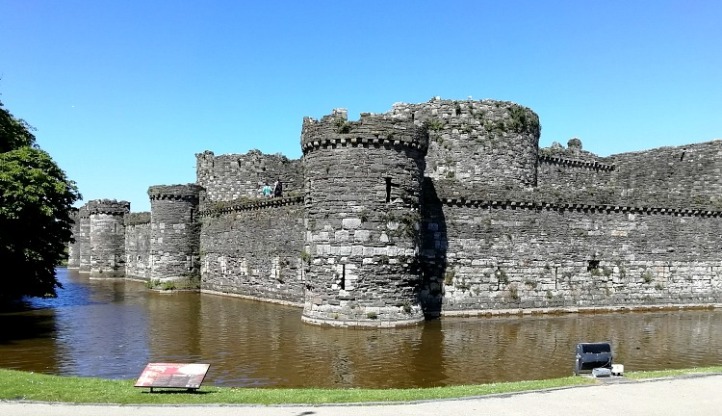 Menai is a strange word and sounds as if it is from some far off exotic country. The literal translation is from main-aw or main-wy meaning “narrow water“. Simple. We had crossed onto Anglesey on the Britannia Bridge but now decided to take the suspension bridge for the route back. It is a very picturesque bridge and much quieter than the Britannia which sits on the main North Wales Expressway. We parked up and walked over, peering down at swirling tidal flow of this stretch of the Menai Strait known as The Swellies. 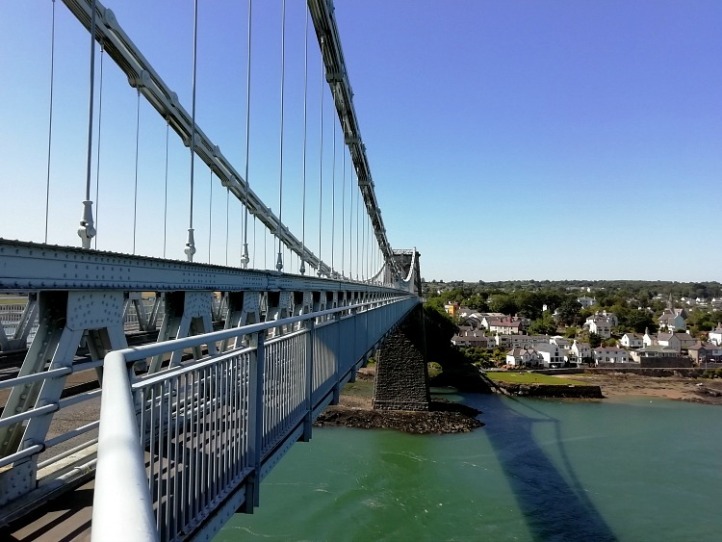 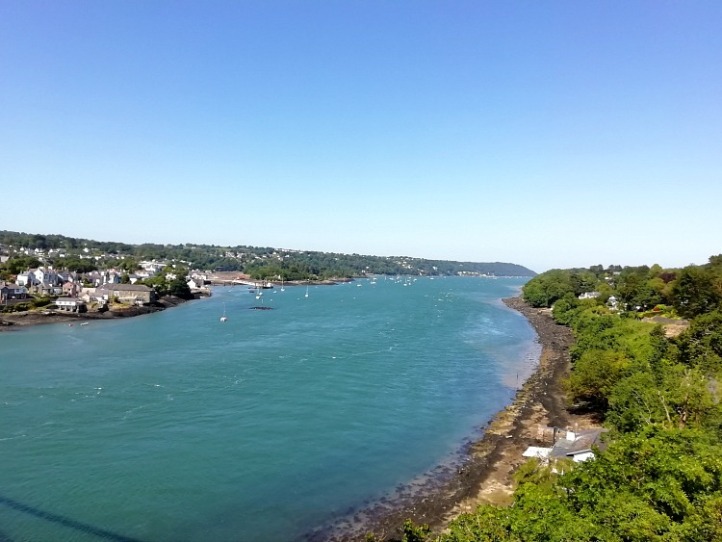 Refreshments were found at The Antelope Inn which overlooks the bridge. Jonno was fine with diet Pepsi but the coffee machine was broken. Past caring about caffeine fix, we were just happy to sit looking out over the water reflecting on our day and wondering how, before the bridge was built, the ferry coped with the dangerous waters, let alone the cattle that had to swim across to be sold at market. The precious need for a coffee somehow seemed overshadowed by the view. 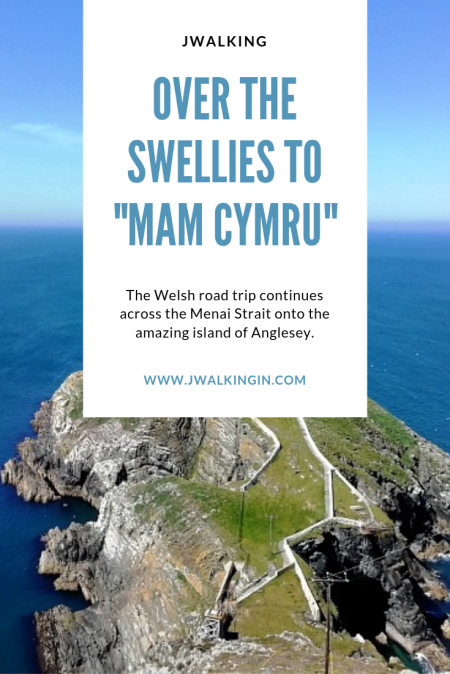 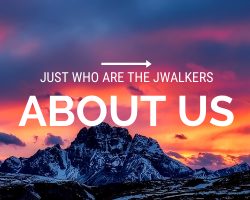