One year later than planned, my friend Wendy and I arrived in Cambridge to put on our walking shoes and complete a 10km night walk around the city. We arrived to sunny weather the day before the walk but knew that rain clouds were gathering for the Saturday event.

With hindsight we made a few rookie errors. The first one was to walk too far on both the Friday and the Saturday morning. It is too easy to do in this beautiful city. Apart from the abundance of amazing University buildings and the punters on the river, it is also easy to meander from one patisserie/bakery/coffee stop to another.

Three of our best finds were:

The Norfolk Street Bakery – A Portuguese bakery on route from the station to the city centre was full of the most tempting pastry and patisserie selection including Queijadas which we had never seen before. Basically a little cheesecake tart with a caramelised top. The one we had was vanilla and caramel flavour but there was also a very tempting citrus one. It looked heavy but it was delicious.

Aromi – Right in the City centre. Another great find. A small bakery serving sourdough pizzas and pizza sandwiches, gelato and coffee. Our eyes were bigger than our bellies so we needed the doggy bags offered and took almost half of our sourdough pizza sandwich back to the hotel for supper.

Bould Brothers Coffee – A very busy little place with coffee connoisseur Wendy even buying a bag of their beans. No wonder the shop was busy. They certainly know their stuff. The coffee was probably one of the best I have ever had.

Searching for the Shine Start Line

Our second rookie error was to not eat before we left for the start line. We had munched through a larger than normal breakfast and didn’t feel hungry during the afternoon but we definitely should have fuelled up on something. After a lot of window watching to see if by some miracle the rain had stopped, it was time to get the leggings, pin the Shine Night Walk T-Shirts with numbers and contact details, walking shoes, macs, hats and glow sticks.

Armed with a map, that got totally soaked within about 30 seconds we headed for where we though the start was. It was pure luck that we came across a marshal just getting into position to man a road crossing point for the walk. Even she seemed none too sure where the start was but we heard a loud speaker in the distance so headed that way. We arrived with about 2 minutes to spare which was a good thing really because standing around for any length of time risked even wetter feet!!

Having already walked about 2kms to the start we headed off. Some of the lights attached to headgear and T-shirts to really “shine” were impressive but the best idea by far was hat umbrellas fringed with fairy lights. The rough weather made it tricky to take photographs. It was tricky just stop my phone getting drenched.

We made good time but were totally deceived by one marshal telling us we were at the half way pitstop when it was at least another 0.5 km. We sort of wished we knew exactly where we were in regards to distance. The rain carried on but so did we. At 6km even the emergency wine gums weren’t doing their thing, but we took it a kilometre at a time and chipped them off one at a time. We arrived at the finish in the Corn Exchange to bright lights, a medal and a malt loaf snack bar.

The weather did impact the general atmosphere of the walk with most people taking the head down and plough on tactic. Usually they are a more social occasion but the aim was achieved of raising some money for Cancer Research and the discomfort we felt was negligible in comparison to what patients undergo both physically and emotionally. There is a (very) small part of me that is pleased that it was more of a challenge – it makes me feel I have earnt the sponsorship.

I want to say a huge thank you to Wendy for marching on with me through thick and thin and an even bigger thank you to all those who sponsored us both. Time to warm up with an extra large Hot Chocolate. 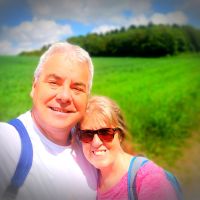 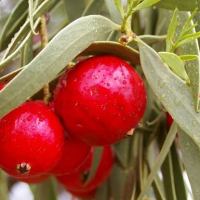 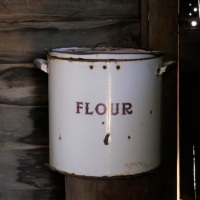