Edmonton: Not Just a Mall 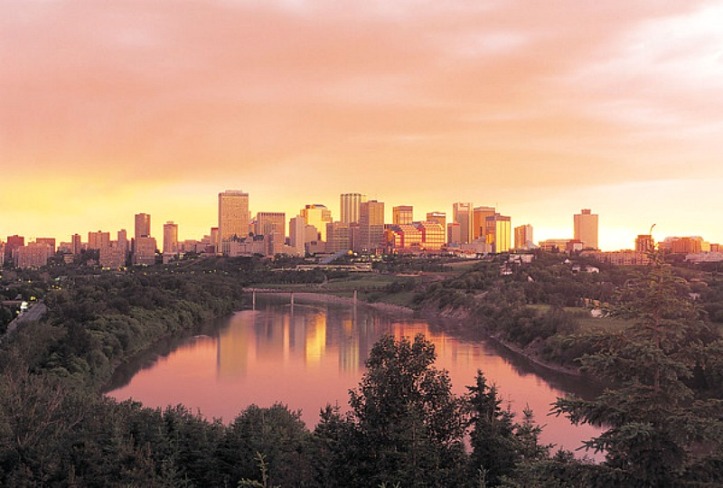 We are not on holiday. This is something we have to keep saying to everyone we meet. This is actually our life. And when they ask where we live, we actually have to tell them that we live wherever we happen to be that day. Jo keeps telling me that I’m freaking our Airbnb hosts out by answering “this is our home, we live with you”. Perhaps I’m trying to freak them out a little but it is actually true, our home is constantly changing from one location to another as we move on. It’s one of the things we especially love about travelling, every single day is different.

The Last Days of Calgary

Sounds like a dramatic end of the world movie doesn’t it? Well it wasn’t exactly like that, except for a bit of screaming and running around at times. As Jo mentioned previously we had always planned a long stay in Calgary so that we could sit down together and discuss the future. We knew we were returning to the UK at the beginning of December but had absolutely no plans after that. A complete blank canvas. So the last few days in our Calgary ‘home’ were just spent talking about all of the possibilities. Interspersed with trips to Luna’s Italian Cafe and Kane’s Harley Davison Diner of course.

Before we left we fancied a long hike so set off for Nose Hill Park a few miles away. Calgary is on the edge of the prairies and is incredibly flat except for one big lump which is Nose Hill, it’s a huge hill slap bang in the the north of the city but completely untouched and wild. The most amazing thing about it is the transformation from city streets to wild barren moorland in a matter of minutes. Within 400 metres of leaving the busy road we were tramping across heather filled moors with the sounds of civilisation dying behind us with every step. Pretty amazing. We soon found somewhere to sit for a picnic with views down across the hill and of the city below. It was just one of those days where the sky was full of changing colour and the world looked fabulous all around.

To complete the picture, as we sat gazing at the scenery and enjoying lunch a stag wandered across in front of us. He looked around, gave us a quick glance, then proceeded to run and jump across the whole hill right in front of us with the city in the background. We were transfixed and in awe at such a beautiful sight. Just us and him for a few moments, priceless.

When we planned this whole JWalking 2 trip we obviously had no local knowledge of anywhere and just had maps and a few daft ideas to go on. After Calgary we had decided that we would fly to Edmonton for a week before travelling further east. We had no idea that it wasn’t that far away or that no-one in the world seems to rate Edmonton as somewhere to visit. Every single Canadian, except for one, has responded in the same way when we’ve said we’re off to Edmonton. “Why?”. Only our hosts brother Frank, who we met outside the house in Calgary one afternoon, had anything nice to say about it so I guess you’d be right in thinking we may have picked a bad place to visit.

Wednesday morning was just a walk to the bus-stop, local bus number 4 into the city centre, and express bus 300 out to the airport to pick up our flight. Everyone, and I mean everyone, always advises us to get taxis but we much prefer travelling like the locals. It might take a little longer and occasionally be a bit more hassle but we think that’s what travelling is all about. We’re not on holiday remember! 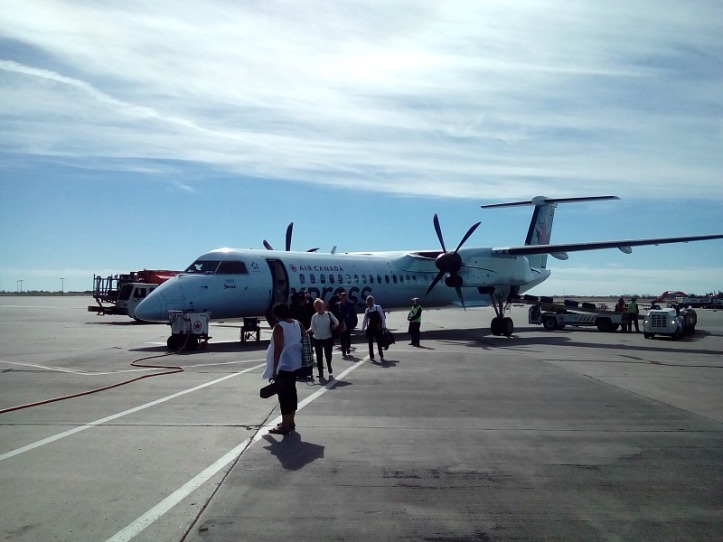 Air Canada is the only way to fly in this country so all of our flights are with the national carrier. The flight from Calgary to Edmonton was a little different as we were on a twin-prop Bombardier aircraft rather than a jet. Propellor right next to our window too (row 8 if you’re interested) and breath-taking views of the Rockies as we noisily took off and made the short 40 minute flight north to Edmonton. Felt like real flying.

The airport is a fair way outside of the city so we had decided to take up our hosts generous offer of a lift. We had a couple of hours to hang around but we figured that only a fool would turn down a lift and it would be so much easier with him rather than multiple buses and then trying to find our new place. So there we are outside Edmonton International Airport standing in the pickup zone waiting for a guy we’d never met in a car we wouldn’t recognise to go to an apartment we’d never seen! Simple. What on earth could go wrong? Actually nothing did, it worked like clockwork and bizarrely we found each other and were soon on our way.

Bashir was our new Airbnb host and what a fabulously friendly guy. Nothing seemed too much trouble and he really put himself out to go the extra mile for his guests. Apart from the airport pickup, which was just so kind, he gave us an impromptu tour of Edmonton and had even filled the fridge with food and drink ready for our arrival. A lovely little apartment block in a tree-lined street close to shops and restaurants and within walking distance of the centre looked perfect. Our new home even had a TV so we were looking forward to watching a film or two after what seemed like months without one. 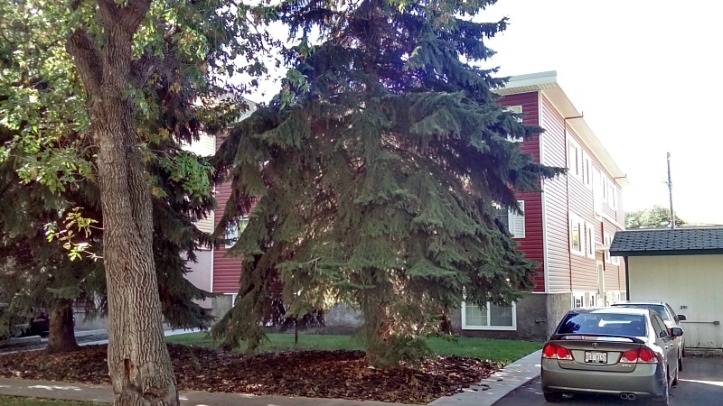 We’re not keen on taking other peoples negative advice so set out to see what the city was like for ourselves and you know what? Frank was right. It’s a fabulous place. We set off after our first breakfast and headed down Jasper Avenue to see the High Level Bridge Streetcar and the Alberta Legislature Building. The streetcar is a restored historic street car service running through the middle of the city across the North Saskatchewan River. Only one car remains but runs all summer. Just past the streetcar line is the impressive Alberta Legislature Building, known locally as the Ledge (apparently). It’s a huge impressive Roman-style structure very much like all of the buildings in Washington DC. Built in 1913 it’s the cultural heart of Edmonton and the surrounding gardens and fountains make it a real centrepiece of the city. 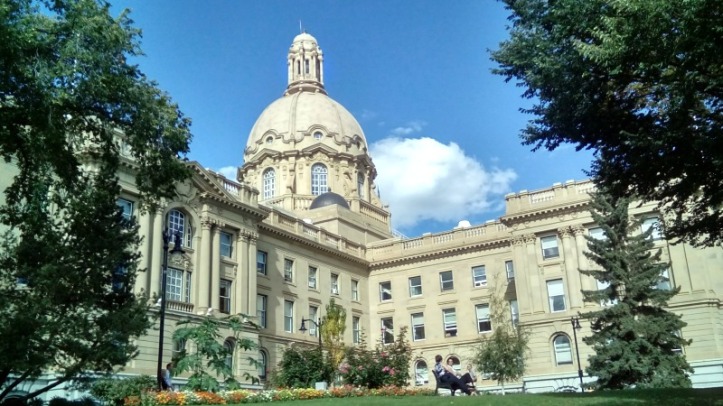 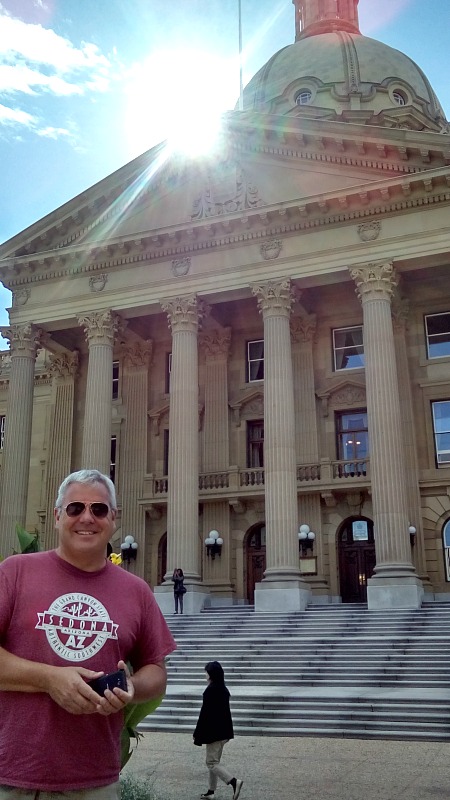 Although it’s very impressive to look at my favourite thing about it was that they seem to play music from the dome constantly and not just classical either. We sat on the edge of the fountains in the Alberta sunshine listening to Sweet Home Alabama, Yesterday, and a selection of rock’n roll classics played on church bells. Brilliant.

Just across the park I was approached by a small sweaty guy in shorts. He was inquiring whether I wanted to join him and his ‘friends’ in an afternoon activity! Dodgy? Not really, they were playing football (proper football not the ridiculous American kind) and as the ball was belted towards me I just trapped it and passed it back. Simple. The small bald sweaty player jogged over and immediately asked if I was English and did I want to play? Obviously my amazing balls skills! Didn’t take him up on it though. 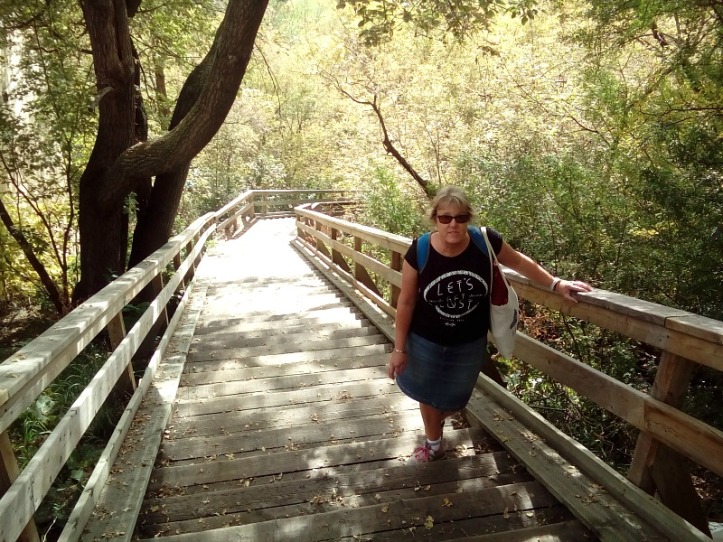 So on up 104th Street Promenade and along to the well named Winston Churchill Plaza. They love the UK here, so many statues and plaques and names all over the place. They also seem to love pyramids. They’re everywhere.

Shopping? Are you serious? Neither of us like shopping, in fact we’re anti-retail completely but we had to go and see the biggest shopping centre in the world didn’t we? The West Edmonton Mall is the worlds largest Retail and Entertainment Mall. Seems crazy doesn’t it? Why here? Anyway a quick bus ride and we planned to find our all about it. We’ve been to Bluewater in London, and the huge Singapore shopping centres but this took the biscuit. Absolutely enormous. We’re not bothered by shops too much but this place had a lake and a full size galleon in the middle of it. 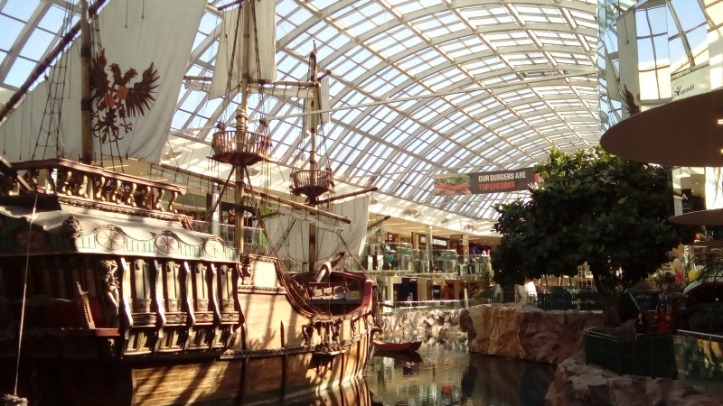 And a swimming pool like Center Parcs with flumes, wave pools, water slides, the lot. And a crazy golf course. And a full size ice hockey rink. And a SeaLife centre with daily sealion shows (in the middle of the shopping centre). Oh and zipwires running across the swimming pool. 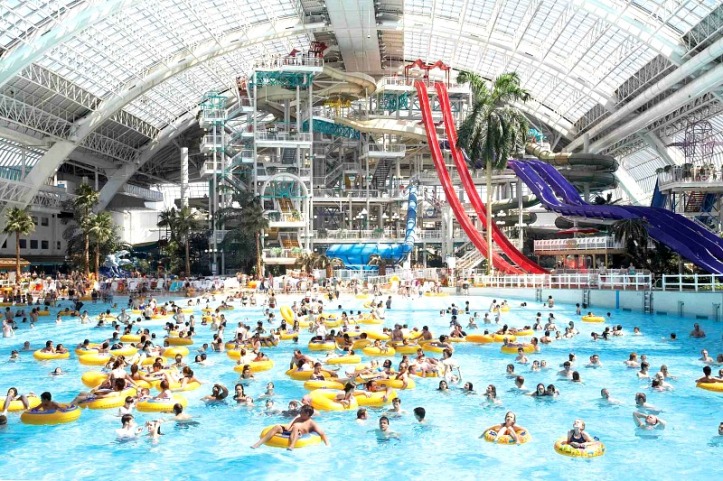 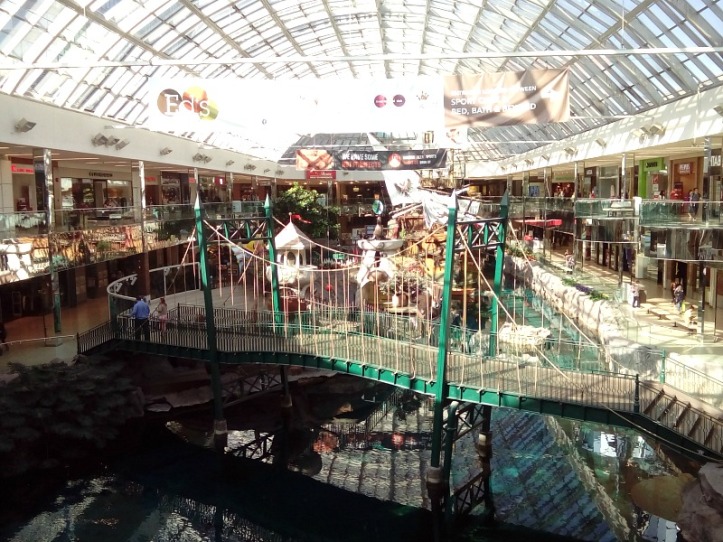 The most important thing that happened in the WEM (as us locals know it) was that we had to purchase two new suitcases. I’ve broken the wheel on my one again and Jo has finally had to replace her classic Flamingo case after she was left crossing a road just holding the case handle with the case lying back on the pavement! Sad day. 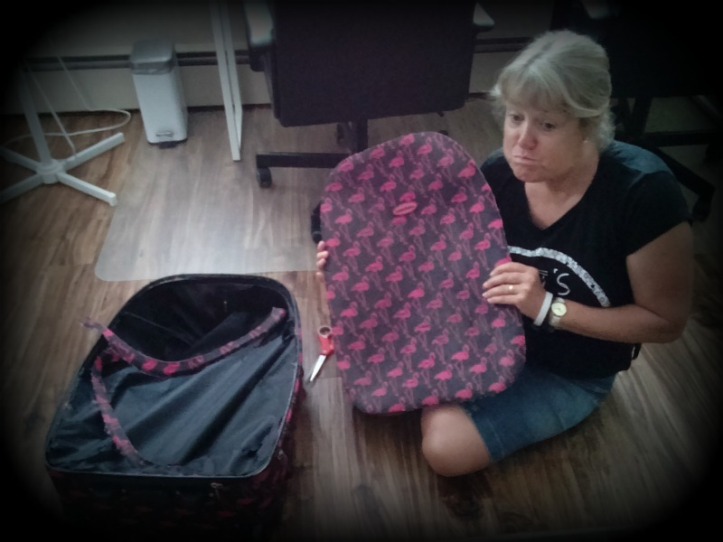 Oh and we went to see the new Tom Hanks film ‘Sully‘. Absolutely brilliant so when it comes out in the UK, and I’ve no idea why that’s three months after North America, make sure you go and see it.

And finally the statue 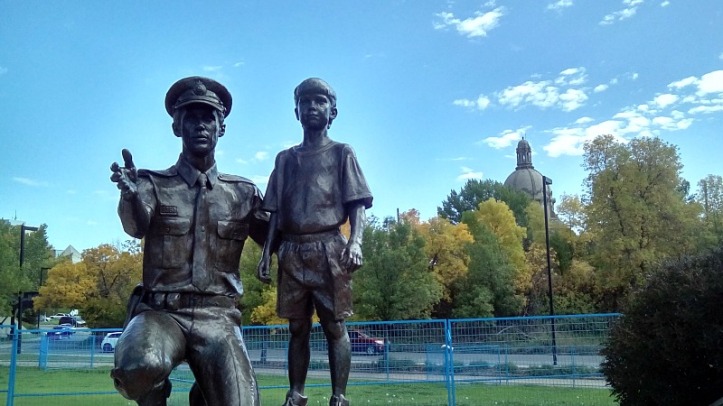 The statue of the policeman and boy on the home page is of Constable Ezio Faraone who was tragically shot and killed in 1990 when in pursuit of a pair of armed robbers. The city named a park after him and a statue was made by  Canadian sculptor Danek Mozdzenski to remember him. It was just so good to see something named after someone local that really deserved it.

Going off the Grid

Our lovely Airbnb just off Jasper Avenue on 113th Street had everything we needed for a fabulous weeks stay. Until disaster! Friday morning breakfast and suddenly no WiFi and no TV! Completely dead. Landlord called and technician booked but it would be 3 or 4 days off the technological grid for us both. It was just like this …. 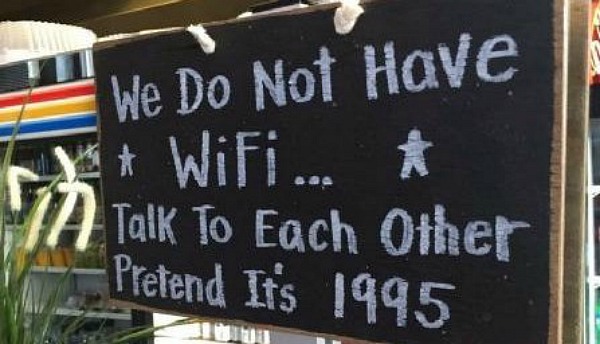 It was more like 1985 as we didn’t even have mobile phones, no contracts over here. But. It was really no big deal and as we are always talking to each other we just did it a bit more. What you don’t have you don’t miss and we really didn’t. Tough being out of touch with everyone back home but 4 days isn’t that long. Just makes you realise though how much we all rely on the internet to do absolutely everything now. A little scary.

So a final word to all of those people that wondered why we had decided to come to Edmonton and who told us that apart from the shopping centre there was nothing to see. You are all so wrong! Come to Edmonton and see what a beautiful, lively, friendly place it is. We feel so at home here already.