We can say we were there! FISE 2017! Hawrelak Park, Edmonton! Jon was a sight to see in his snapback and hoodie chillin with his BMX bros. The Edmonton audience, more well known for its hockey than its BMXing, seemed a little shocked to be hosting a round of the FISE World Championships.  “Drop it like it’s hot!” was the strap line – more akin to something I normally do in the kitchen rather than the BMX moves on the ramps.  Despite 3 sons in their 20s, one of which had a BMX bike plus ramps set up in the garden, and classing ourselves as not too ancient, the commentators spoke in what was a mysterious language to us.  Apart from the references to sick trip 360 tail whips and windscreen wipers interspersed with Yo! Wo! No! and Bro!, we were also updated on which riders could party all night long and those that were “made of marble” (which I think means can wipe out on the park/ramps and get back on the their bikes and carry on as if nothing had happened).

So to give you a few stats:

Jon muscled his way in with the phot0 crew and got some good shots. 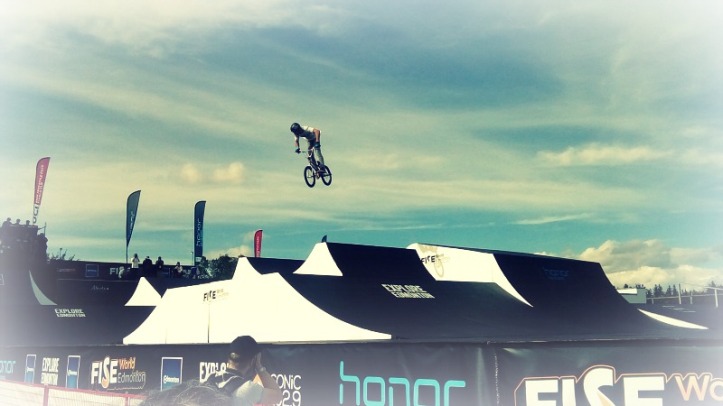 Just as were were heading off, the mountain bikers started warming up on the ramps and dirt slopes. For me these riders were even more impressive. The start ramp was over 60ft high and gave them the speed to hit the first ramp and do a loop the loop (not a FISE term) at about 80ft above us before landing on a dirt mound.  This was followed by 2 more ramps where more death defying tricks took place.  Crazy or skilled? I am going with incredibly skilled. 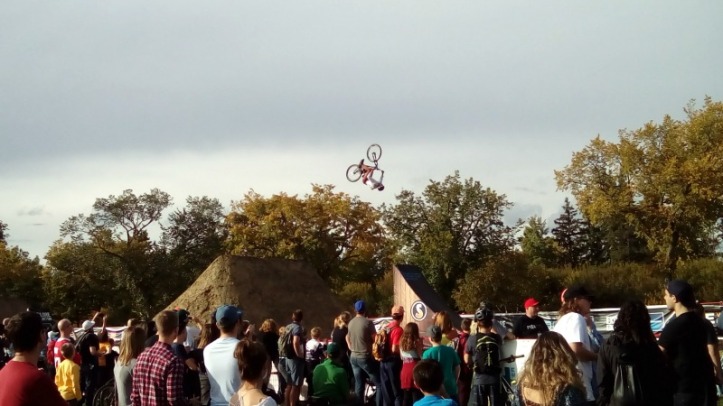 As dark clouds rolled in we headed off along the river for the 3 or 4 km walk home.  Chatting all the way about what we had seen – couldn’t understand a word Jon said – with all the Yo! Wo! No! and Bro! I hope this wears off because I can’t see him on a midget bike somehow.  Circus clown comes to mind!

The Day of Three Walks

Not having WiFi for a few days meant a trip to the Second Cup coffee shop each morning to pick up emails and messages.  Despite several attempts, our host never quite understood that we can’t pick up messages without WiFi. So the first message we read were updates on the situation from him which he assumed we had received the night before.  So that was Walk One of The Day of Three Walks.

Walk Two was a stroll downtown to the Ice District.  So called because of the brand new Rogers Place ice hockey stadium built in that part of town.  We found a door open so we went in for a nose around. It was only opened on 8th September this year and the door handles and stair rails were literally all still covered in bubble wrap and the security staff were undergoing training.  It was that new.  It can hold an impressive 18,000 for an ice hockey game and over 20,000 as a concert venue and cost over 480 million CD. There was a large bar/grill/casino that was up and running and a ticket office with about a dozen bright and shiny staff waiting to pounce on would be customers.  We did manage to get sight of the training rink but the main arena was well out of the way of gatecrashers like us.  It was an impressive building to house the “Oilers”.

Just across the road from the stadium was the Edmonton Neon Museum, well maybe not a regular museum but a huge wall full of old neon signs from Edmontons Neon Hay-Day. Fascinating stuff and a whole bunch of plaques for me to lose myself in.

That only leaves me to explain Walk Three – an evening expedition to the Alberta Legislature. Although we had previously visited this building we had read that the fountains in the evening were illuminated and were worth a look.  At first we were disappointed because the fountain at the front of the building just had normal white floodlights.  When we ventured a bit further we found smaller fountains that did actually change colour and size intermittently.  When they were at their lowest ebb they reminded me of the scorch marks left on the pavement by the Delorean in Back to the Future.  See what you think…….. 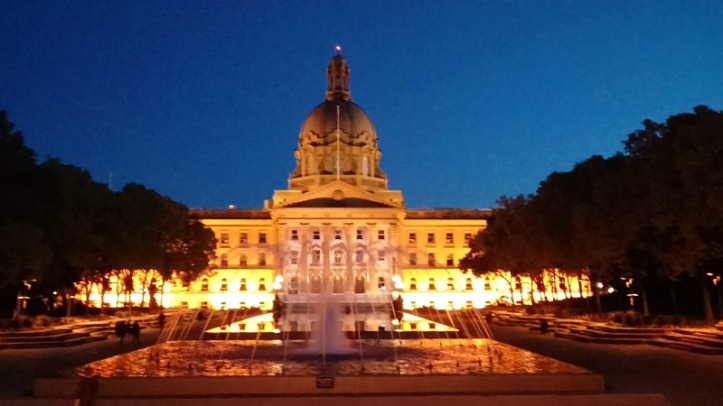 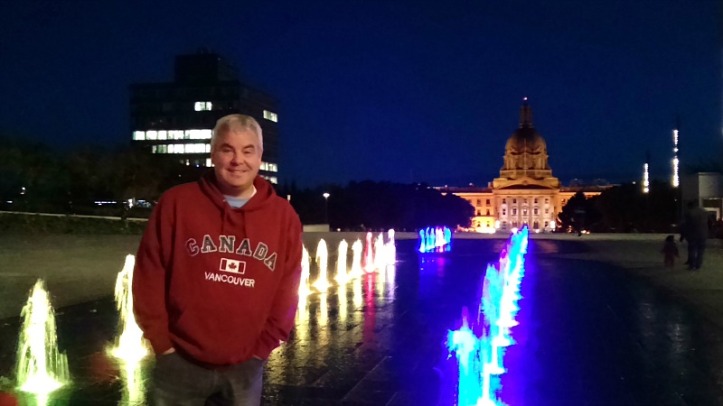 It was a memorable way to finish off our stay in Edmonton.  It had been another one of those places that crept up on us, partly because of some of the lack lustre comments from people we have met along the way in Canada but I am very pro-Edmonton and of course Jon will be back for the FISE World Championship round next year. Yo!