Braemar and the Snow Road

Our favourite days out are those relatively unplanned road trips where we slowly explore and discover a whole host of previously unknown places. Those days seem long and exciting and full of new experiences. Our road trip to Braemar along the famous Snow Road in the Cairngorms was one of those days.

What’s was the plan then?

The plan started, as usual, packing our picnic, drinks and shorts.  Yes shorts! Nineteen days into our Scotland jaunt and we have only seen rain once and that was on the window after an overnight shower. Second stage of the plan was to consult our road map and Scotland guide book to see where we could head for and sights along the way. Part of the route was a re-run of a road trip we did last year in dreadful weather and we were hoping the views would be somewhat different and boy were they.

We started out from our wee lodge in Aberfeldy heading south east towards Dunkeld with the ultimate destination of Braemar some sixty miles away. Jonno was at the wheel

A Couple of Pitstops

We avoided the main A9 and took the smaller roads through Griffin Forest and past Loch na Creige and the large Griffin Forest wind farm. It was a misty start to the day and the mist was hugging the Loch which was quite dramatic. Our first stop off was in Dunkeld on the banks of the River Tay. On the opposite bank is Birnam. The bridge between the two is very picturesque, particularly if you get Dunkeld Cathedral in the same photo.

Our next pitstop was at Blairgowrie, a walk around the bustling town and a coffee and scone in the Cateran Cafe which is named after the Cateran Trail, a 103 mile circular walk starting and finishing in Blairgowrie.

The road took us past Loch of Clunie which had a small island with a ruin. The ruin is of Clunie Castle which was home to the Bishops of Dunkeld. With the bluebells circling the loch it was a picture.

Suitably refreshed we drove towards Glenshee on the famous Snow Road along part of the Snow Roads Scenic Route. It is a 90 mile journey from Blairgowrie to Grantown-on-Spey. The road uses the highest public road in Britain, the Cairnwell Pass 2200 feet above sea level and takes you through some amazing scenery of Glen Shee and the eastern Cairngorms.

At the top of the Pass is Scotland’s biggest ski centre, Glenshee, the 21 lifts over 4 mountains makes it an impressive sight in summer but it would be great to see it covered in snow and full of skiers and snow boarders. 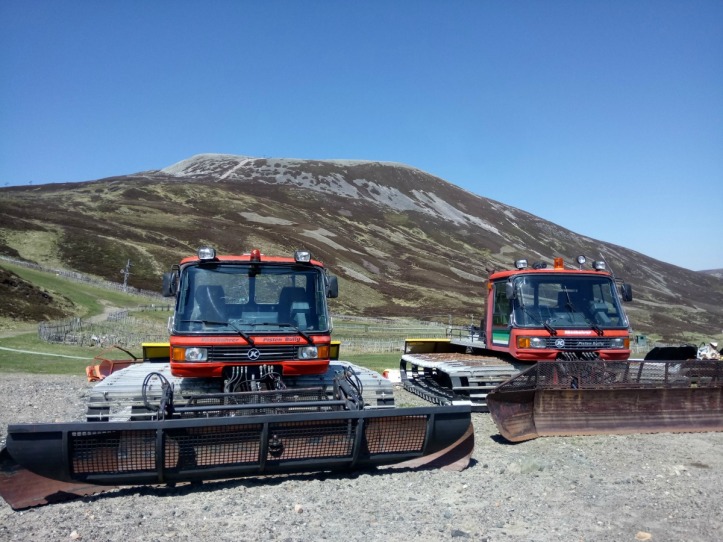 Lunch in a Castle

Well to be honest it was the ruins of a castle. By name it is Kindrochit Castle in Braemar. The ruins are of a 14th century castle on the edge of Clunie Water, a strategic position of it’s time. 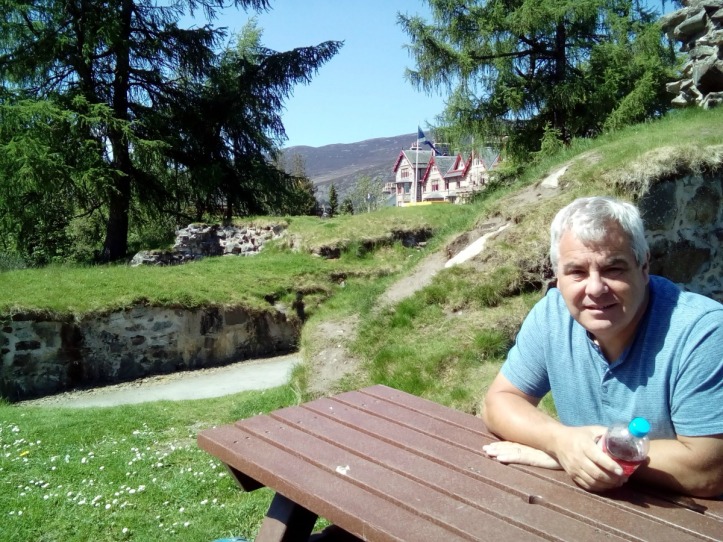 We picnicked and then had a stroll around the town. The local butcher selling locally caught Haggis and the Sporran shop particularly caught our eye!

At Number 3 Glenshee Road is the house where Robert Louis Stevenson conceived the idea for Treasure Island from a map of an imaginary island he drew for this stepson, Lloyd. He originally called it The Sea Cook: A Story for Boys. Not quite as exciting as Treasure Island in my view.

We took a short walk out of the village to Braemar Castle. The Farquharson clan seemed to change allegiance with the wind, from Hanovarian to Jacobite and back again. The castle’s most famous visitor was Queen Victoria who stayed there when she attended the Braemar Gatherings (now games) in 1831 in the grounds of the castle. It is open to the public and is now used mostly for events.

We couldn’t leave Braemar without seeing the home of the most famous Highland Games. The gathering has been taking place in one form or another for over a 1000 years but in it’s more modern form for around 200 years. It was originally held in the grounds of the castle but in 1906 land was donated by the Duke of Fife for a permanent arena. It was named The Princess Royal and Duke of Fife Memorial Park.

The gathering always takes place on the first Saturday in September and members of the Royal Family usually attend, travelling from their residence in Balmoral. We could see that big changes were taking place. Some buildings were being renovated to house an exhibition centre and the Royal enclosure was having a lick of paint. It was a fairly small arena with a few terraces of seats.  It must be great to attend and here the pipers piping and events taking place all around the arena.

We had such a great day and the drive home seemed even more impressive in reverse. Recommendation to any travellers taking this route stop off at The Wee House of Glen Shee. There is a tea shop, visitor centre, small museum and pottery. Second recommendation, take you time. This scenic drive has to be done “slow-time” not while you are watching the clock.