Sometimes we get extremely confused. We know we’re in New Zealand and we know it’s a different country on the other side of the world but often it seems so familiar. Perhaps it’s got something to do with the fact that Hastings, Canterbury, Brighton and even Maidstone are places down here! Crazy.

If I were to be brutally honest with you I would have to admit that we were both a little concerned about coming to live in a big city after months of travelling through the amazing countryside of New Zealands North and South islands. We thought we’d hate the traffic and the masses of people and the sheer busyness of it all (busyness is a word right?). It is busy and there is traffic and Auckland is a huge city. But it’s actually taken us a little by surprise. We’re getting quite fond of the place.

It’s a massive sprawling city spread over multiple islands with over 30% of the total population of New Zealand. Some people say that it actually covers a bigger land mass than London although I’m not totally convinced. Whatever the facts we are getting to really like it and thoroughly enjoying our time in the suburb of Epsom (right next to Newmarket, Balmoral and Sandringham if you can believe that).

One of the main attractions is the hugely popular Sky Tower on the corner of Victoria and Federal Streets. Built in 1997 it is 328 metres high and is the tallest man-made structure in New Zealand. Jo is not a lover of heights but psyched herself up as we took the glass bottomed lift to the 51st floor.

The whole structure is so big and solid that she wasn’t at all fazed and even made it up to the Sky Deck on level 60, highest point visitors are allowed to go. You can see for 80kms in all directions up there and it was incredible. There is a SkyJump deck on the 53rd floor where deluded maniacs with more money than sense jump off and fall 200 metres to the ground. Controlled obviously by wire but idiotic nonetheless. We really enjoyed watching some of the other visitors, mainly Americans, who had no idea about SkyJump and nearly wet themselves as bodies came plummeting past the windows. Brilliant fun.

After that we needed a long walk and fresh air so headed for Viaduct Harbour on the northern edge of the city. A bit of wandering, a bit of people-watching, a bit of asking each other ‘who on earth can afford one of those apartments’, and a whole lot of sunshine. Beautiful, and it’s growing on us every day.

Another Day in the Outfield

We are staying in Auckland for 4 weeks and one of the reasons was to have a quieter more relaxing time after the hectic schedule we’ve been following since we arrived in Christchurch on December 5th. We’re not complaining but just wanted to be able to spend more time just relaxing rather than sightseeing or going out. Oh, and we need to get planning and booking JWalking 2 don’t we?

So, what do we do when we need to relax? We go and watch cricket of course! Jo mentioned that we’d been to Cornwall Park and seen the ground so we headed back on Saturday to watch our boys (!) play against Auckland University.

Our host Andy kindly lent us a couple of chairs and a coolbox so we were all set. Found some shade, sat back, enjoyed our ham rolls and a few beers, and watched our new team get hammered!

Didn’t matter though as we had the best day and my new cricket enthusiast thoroughly enjoyed herself. Even if I was furious about the way ‘our boys’ played!

As the city has so many islands and bays there is quite an extensive ferry system which we thought we should try out. The town of Devonport is on the north shore of Waitemata Harbour and just a 20 minute ferry trip from the city. We love a sea cruise, this could be pushing it a little I guess, but got ourselves on the boat for another day out.

Lovely trip over the harbour but what’s really amazing is that suddenly you’re transported into a quiet, idyllic, old English town that appears to be from another age. The bustling city is right across the water but life seems to slow down in front of your eyes. Really odd but very nice. I think it may be the posh side of town.

There’s a great walk along the harbour side down to the North Head Historic Reserve. This is an old naval base with gun batteries that was set up in 1870 to defend the city against attack by Russia. It’s got a great history since then with bigger and better guns but they have never been fired in anger.

So fabulous day with more ham rolls and plenty of walking and exploring. Loads and loads of wartime stories and information available too but one story that I really like. Sorry to bore you but you need to sit up and pay attention now. Ok?

In 1907 the US President Teddy Roosevelt sent a fleet of American battleships around the world on a ‘goodwill’ flying the flag mission. All of the ships at that time were painted white and it was known as the ‘Great White Fleet’. The fleet of 16 battleships arrived in Auckland in August 1908 to a heroes welcome. The city opened its arms to the American sailors and thousands turned out to show their support. It was seen as a show of strength by the USA and the Kiwis welcomed them warmly. However, behind the scenes things weren’t quite the same. One of the reasons for the world trip was that the Americans were concerned about the Japanese and wanted to show them who was boss. At the time Britain and Japan had a peace treaty and in the event of any conflict that would mean New Zealand would support Japan. So the crafty Americans, whilst parading and celebrating with the locals, were drawing up an invasion plan. They gathered intelligence and published a 62 page Naval invasion Plan for Auckland detailing where they would attack, where they’d site their big guns, and how they would invade. Interesting huh?

I’d never ever heard about this and found it fascinating. Seems like a great idea for a film with Tom Hanks and Russel Crowe, with perhaps a side story romance between an American sailor and a Kiwi girl played by Matt Damon and Kiera Knightley. Oh and Jo has asked if Hugh Jackman could be involved but I’m not totally sure if she means in the film!

Couple of beers at the end of the day in the Crab Shack on the edge of Viaduct Harbour. Well deserved and seriously enjoyed. Auckland, you’re really winning us over. 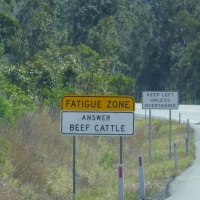