The Shores of the “Lake of Shining Waters”

“Where can this be?” I hear you ask.  Lake Ontario, of course and time for a reunion.  Another reunion?  So soon after recovering from our rendezvous with Kier (see Toronto in the Fall post).  Especially Jon, who is no longer used to sinking 5 pints all in one afternoon but the good company, good weather and good craft beer made it slip down all the easier.

Our previous hosts in Port Dalhousie, Christine and Peter, made the kind offer on departure of asking us to join them for a day out of the city.  (It was if they knew our philosophy of never saying “no” to anything.) We were enjoying Toronto but the invitation to spend some more time with our new friends and see some more of their local area was too much of a temptation.  So after a 10 minute walk to the Go Train in Mimico and about a 50 minute journey south, we arrived at the Burlington Go Train station where we made an easy transfer to the Go Bus.  This took us to St Catharines where Christine and Peter were waiting for us.  They had conveniently arranged perfect sunshine for our day out.

We chatted all the way to our first stop, Queenston Heights Park.  We had passed this large park whilst staying the area but the weather had been poor.  The park is almost at the edge of the Niagara Gorge and has beautifully landscaped gardens with the trees starting to turn to deep reds and oranges.  It was a great backdrop to the two memorials we visited.  Then we heard the cannon!!! No we were not under attack, it was some sort of ceremony attended by what looked like cadets at the memorial to Isaac Brock.

Isaac Brock was a British Army officer and colonial administrator who fought and died at the Battle of Queenston Heights in 1812.  The design reminded us very much of Nelson’s Column but the Romanesque statues on each corner of the pedestal mystified us.

We also looked at the new memorial which had only been dedicated a few days earlier.  The Landscape of Nations Memorial recognises the role of the First Nations in the War of 1812.

Following a short drive, we parked up at the Niagara Glen Reserve and headed down what we can only describe as a giant 200 ft wrought iron fire escape.  This took us down the cliff face of the Niagara Gorge so we could complete a scenic walk down to the river.  This was where the peace and quiet of the woodland walk was replaced with the noise of the white water raging by.  I don’t think you would stand much of a chance of escaping if you slipped in!

After a bit more wandering, Christine was team leader and her great sense of direction led us back to the fire escape. All this exertion had given us an appetite so Peter chauffeured us to the Jordan House for a hearty lunch.  What a great day and all thanks to the great concept of Airbnb and our exceptional hosts Peter and Christine.

Before arriving in Toronto, we had not realised that there were islands just off the shore of the downtown area.

There are about nine islands in total, most of which are joined to each other via bridges and you hardly know that you have moved from one to another.  The islands are only accessible by a short 15 minute ferry or water taxi ride. The islands are a mix of parklands, around 300 homes, a farm, several boat clubs, an amusement park, a pier and long stretches of sandy beach.  The most south western part of the islands was extended in the 1930s to accommodate the building of the Billy Bishop Toronto City Airport.  It is named after a Canadian WWI flying ace, only accepts propeller aircraft yet it is still the ninth busiest airport in Canada.  It’s other amazing claim to fame is that the airport is only accessible by the worlds shortest regular ferry route (121 metres and the crossing only takes 90 seconds) or via a pedestrian tunnel.

Once again we had beautiful weather and we jwalked, then jwalked some more.  The islands seem to be the much needed open space that the downtown area lacks and we really enjoyed exploring them. 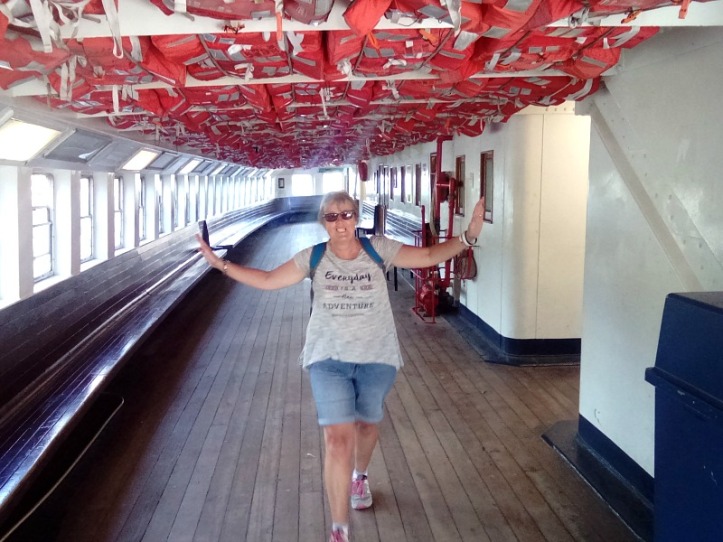 I can’t sign off without mentioning our local bakery that is so much more than a bakery! We walked along to get a coffee and a pastry and were amazed to find counters of hot food, a deli, gelato, breads of all shapes and varieties and racks and racks of pies, patisserie items and pizza.  Our visit coincided with Canadian Thanksgiving which appears to have a sort of Harvest Festival theme. This meant Sanremo had boxes of orders literally stacked from floor to ceiling awaiting collection.  In fact, they had so many boxes awaiting collection that the whole of the cafeteria seating area had to be closed to house them.  What busy bakers!  Can you believe that we felt so totally overwhelmed by the choice and we came out empty handed.  However, we had probably inhaled about 2000 calories each! 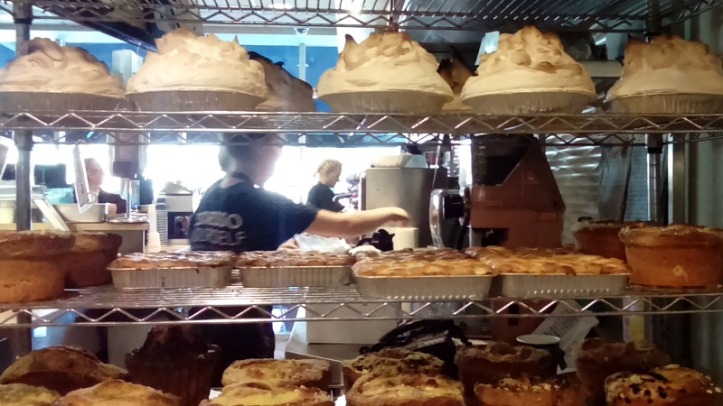